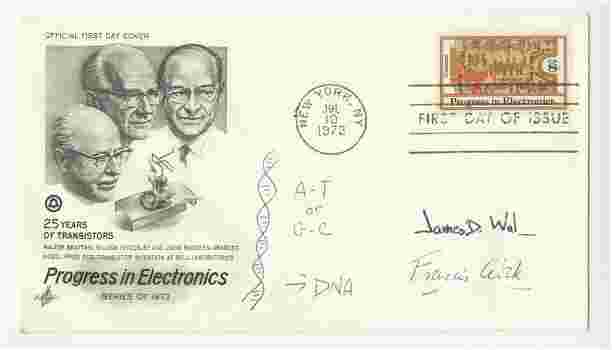 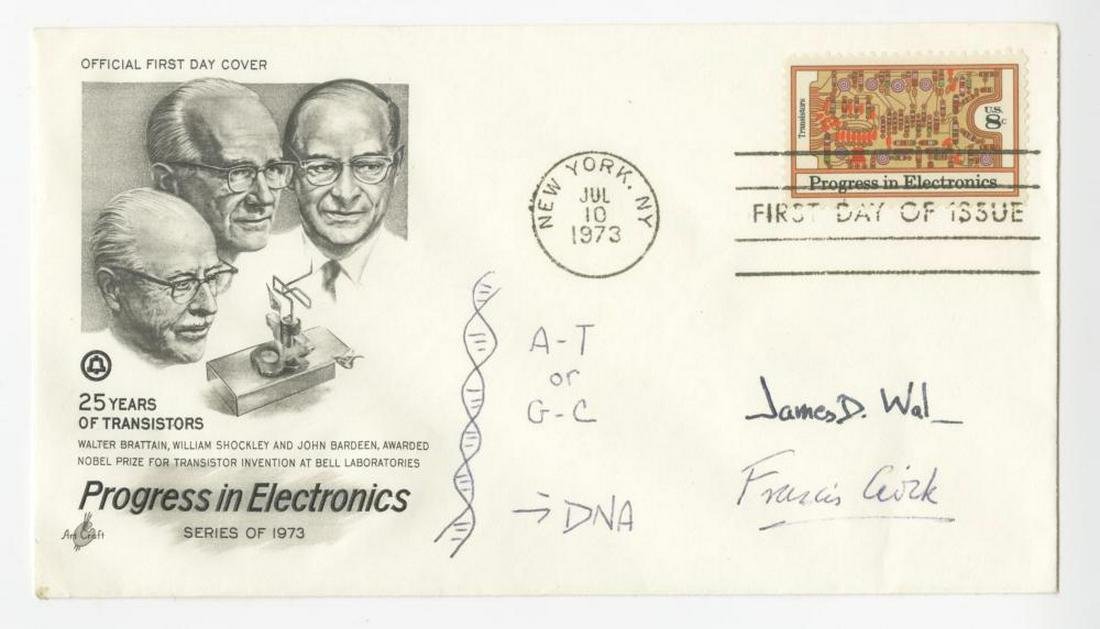 First day cover signed by both James Watson and Francis Crick, with a spectacular drawing of a double helix strand of DNA rendered by Crick who added the notes of "A-T / or / G-C", and "DNA". Signed by Watson as "James D Watson", and Francis Crick as "Francis Crick". The FDC was for the "Progress in Electronic" series in 1973, with the postmark of "July 10, 1973". Fine condition.

Francis Harry Compton Crick was a British molecular biologist, biophysicist, and neuroscientist. In 1953, he co-authored with James Watson the academic paper proposing the double helix structure of the DNA molecule. However leading up to this remarkable finding which awarded them the Nobel Prize, in 1947 Crick knew no biology and practically no organic chemistry or crystallography, so that much of the next few years was spent in learning the elements of these subjects. During this period, together with W. Cochran and V. Vand he worked out the general theory of X-ray diffraction by a helix, and at the same time as L. Pauling and R. B. Corey, suggested that the alpha-keratin pattern was due to alpha-helices coiled round each other.

In 1951, Francis Crick met James Watson who was visiting Cambridge. Although Crick was twelve years older, he and Watson "hit it off immediately." Watson ended up staying at Cavendish, and using available X-ray data and model building, the two solved the structure of DNA. The classic paper was published in Nature in April 1953. A flip of the coin decided the order of the names on the paper. Francis Crick, James Watson and Maurice Wilkins shared the 1962 Nobel Prize for Physiology of Medicine for solving the structure of DNA. Maurice Wilkins and Rosalind Franklin provided some of the X-ray crystallographic data.

After the "double helix" model, there were still questions about how DNA directed the synthesis of proteins. Crick and some of his fellow scientists, including James Watson, were members of the informal "RNA tie club," whose purpose was "to solve the riddle of RNA structure, and to understand the way it builds proteins." The club focused on the "Central Dogma" where DNA was the storehouse of genetic information and RNA was the bridge that transferred this information from the nucleus to the cytoplasm where proteins were made. The theory of RNA coding was debated and discussed, and in 1961, Francis Crick and Sydney Brenner provided genetic proof that a triplet code was used in reading genetic material.