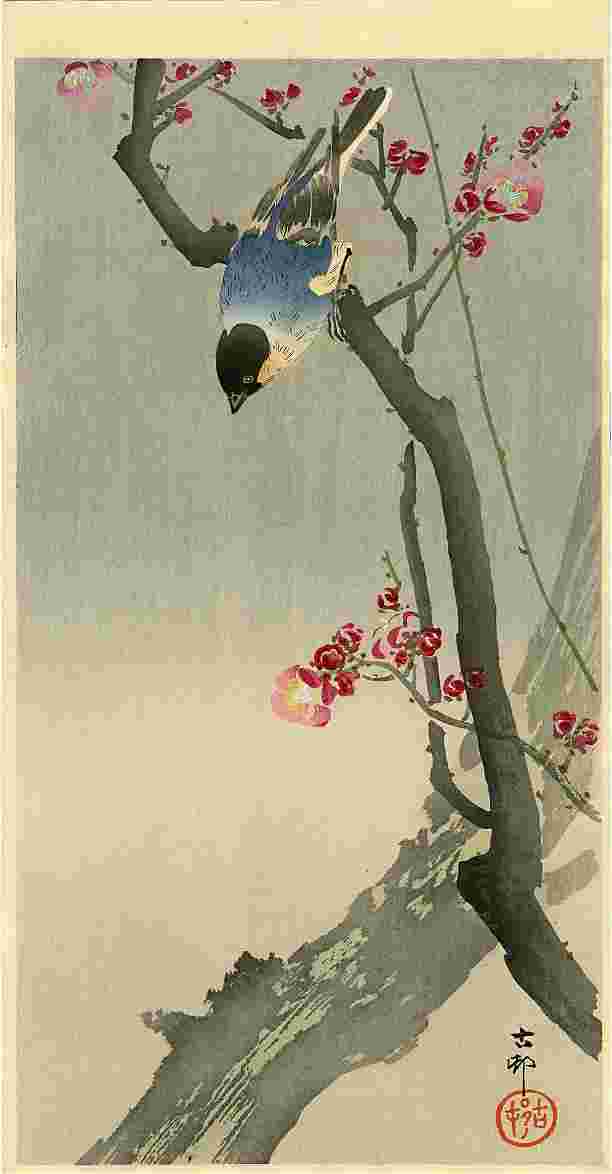 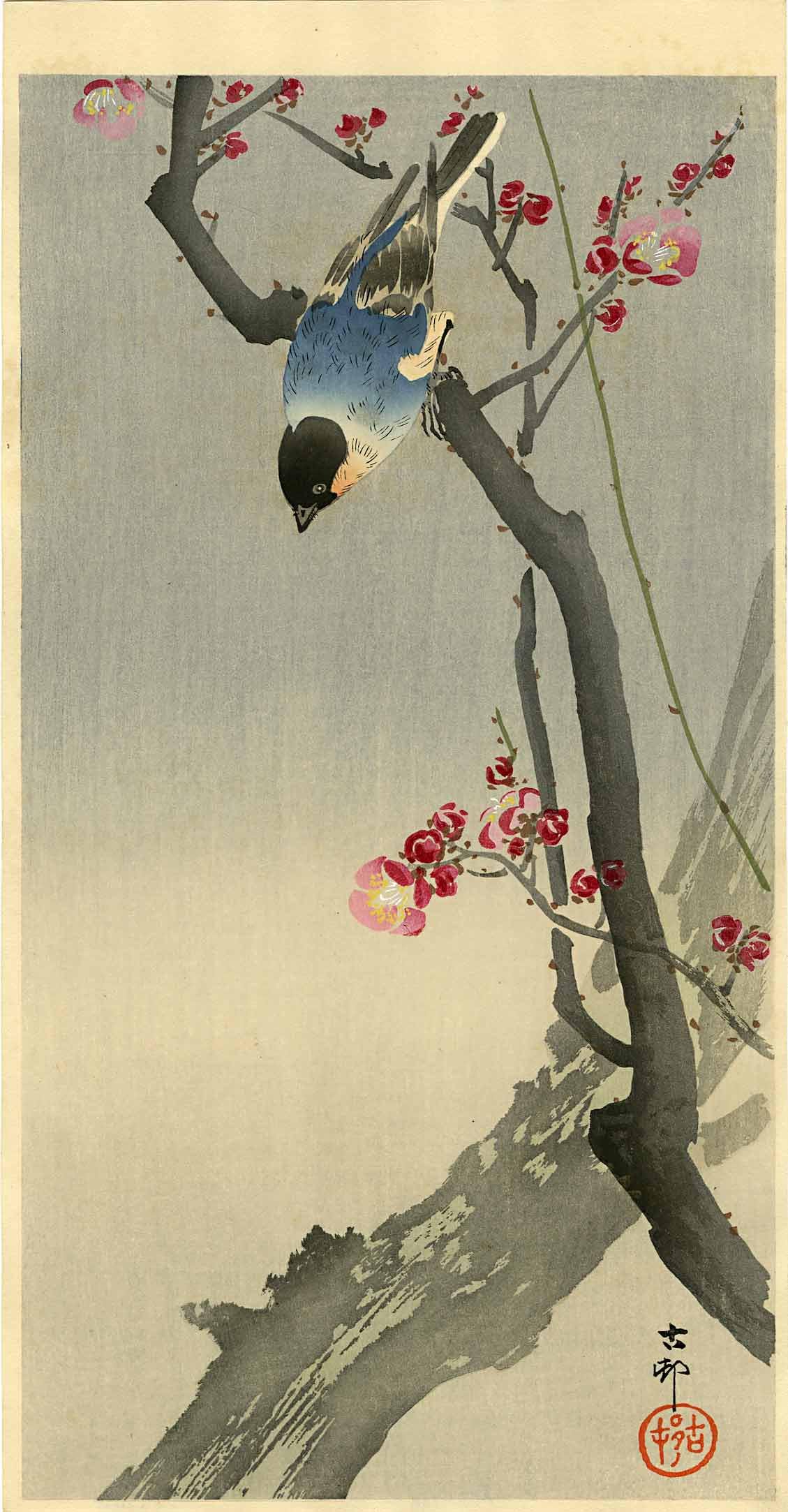 PROVENACE: from the estate of Robert O. Muller

OHARA KOSON (1877-1945), who also went by the art names of Shoson and Hoson, began his career as the student of Suzuki Koson where he painted flora and fauna between 1895-1902 gradually becoming known as a "Nihonga" painter in the Kacho-ga (nature print) genre. Briefly during the Russo-Japanese war Koson produced Senso-e (war prints), but the vast majority of his early prints (1900 -1912) were nature prints designed for the North American and European markets for the publishers Kokkeido and Daikokuya. These prints were all signed "Koson". Between 1912-1926 Koson returned to painting, but using the name Shoson, he continued to design woodblock prints, this time in collaboration with S. Watanabe. Koson also produced prints using the name Hoson which were published by Kawaguchi between 1930-1931.

While the artists' prints had always been sold abroad, Koson's success was assured as a result of the 1930 and 1936 Toledo Museum exhibitions. More prints by Koson were sold during these shows than any other artists' due to their artistic merit and their relatively inexpensiveness in comparison with of the works of Yoshida, Shinsui, Hasui and others. Koson's career peaked in the mid 1930's. His work is realistic, based mainly on his own sketches and watercolors. It is estimated that he produced more than 450 designs of birds.

WHO WAS ROBERT O. MULLER? Robert O. Muller's love affair with Japanese prints began one day in the 1930s, when as a student in New York City he spotted a Hasui in a gallery window, and immediately arranged to purchase the print. As a newlywed in 1940 he went on a print shopping tour to Japan with his wife where he met the shin hanga publisher Watanabe Shozaburo and Watanabe's stable of artists including: Kawase Hasui, Shiro Kasamatsu, and Ito Shinsui. He also met and befriended Hiroshi Yoshida.

After WWII, Muller continued to deal in Japanese prints, but he was also an avid collector with a keen eye for good art. Although the Muller estate is best known for shin hanga, Mr. Muller also collected late nineteenth century prints and good reproductions of famous Edo masters.

When Mr. Muller passed away on April 10, 2003, he had left possibly the largest and finest estate of 20th century Japanese prints in the world, and the question of what would become of his estate was a major topic among Japanese print collectors. The finest 20th century prints from his estate were given as a gift to the Sackler Gallery of the Smithsonian Institute in Washington D.C., and an exhibit was mounted. Other portions of the estate were sold at auction and still more remains with his heirs. Several books have been published about the Muller collection.

ALL PURCHASES WILL BE SHIPPED DIRECTLY FROM OUR GALLERY. Domestic/USA shipping via USPS (rigidly packaged, fully insured) is $30.00 for the first lot. Combined lot shipping is $5.00 additional per lot. International shipping via USPS (rigid packing, fully insured) will be determined by destination (typically $65.00 - $80.00 for the first lot, with $5.00 additional fee per each additional lot). We're happy to provide international shipping estimates on request.

VG, with minor flaws as shown

1,147 Followers
Get notifications from your favorite auctioneers.
As Seen On
Shop With Confidence
Since 2002, LiveAuctioneers has made exceptional items available for safe purchase in secure online auctions.
Popular Searches
Artists & Creators
Brands
Style Periods
Origins
Company
Winning
Selling
Â© 2002-2020 LiveAuctioneers. All Rights Reserved.Cookie PolicyTerms & ConditionsPrivacy Policy
This site is protected by reCAPTCHA and the Google Terms of Service and Privacy Policy apply.
BACK TO TOP