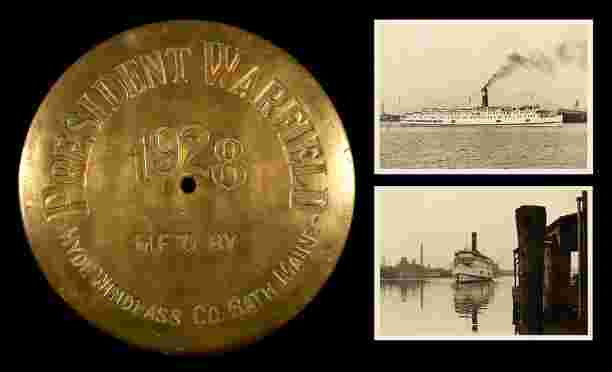 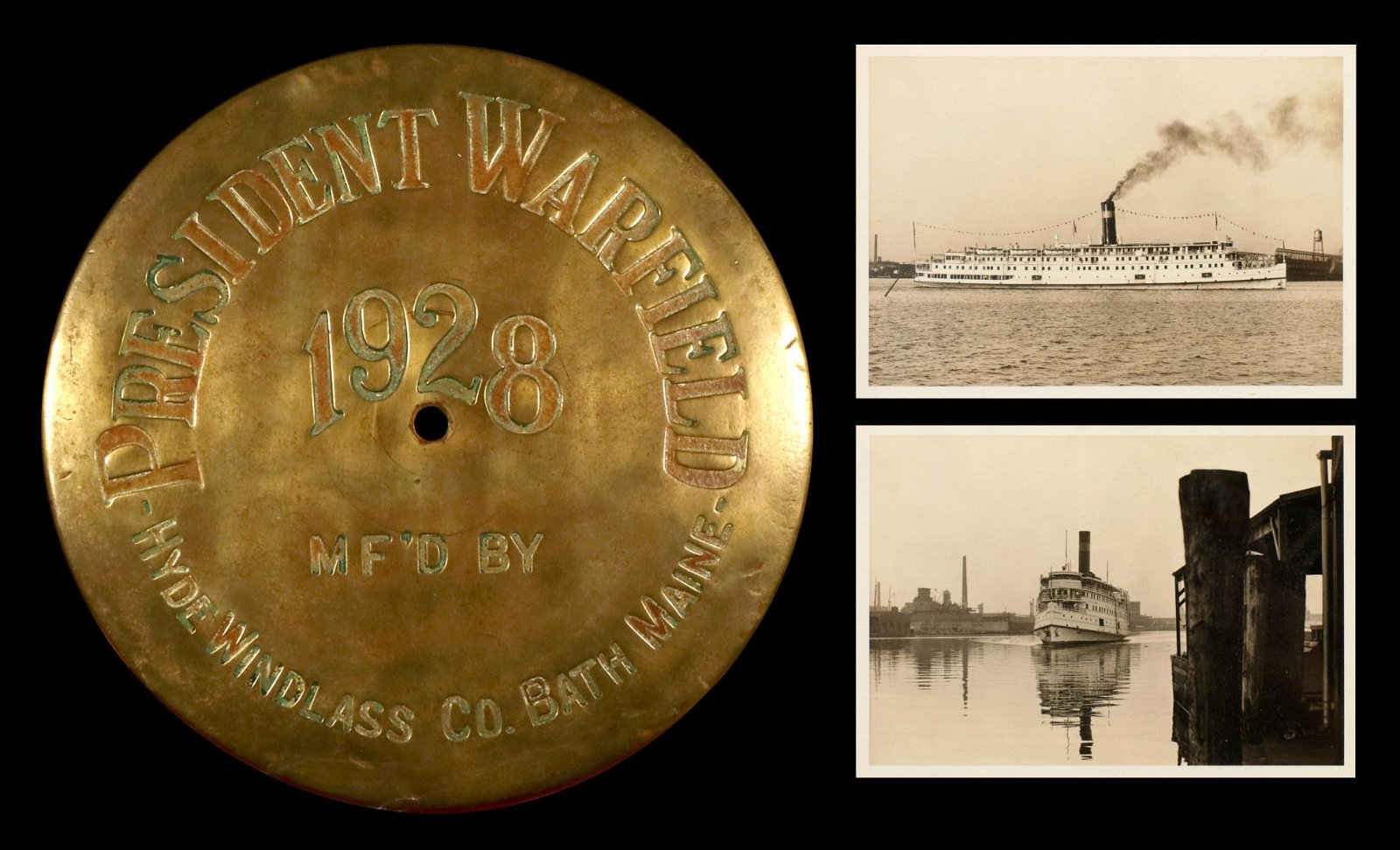 A builder's plate from the SS President Warfield with photographs.

As John Kelly from The Washington Post wrote: 'Of all the passenger vessels that once plied the waters of the Chesapeake Bay, perhaps none had as interesting a life as the S.S. President Warfield, flagship of the Baltimore Steam Packet Co., aka the Old Bay Line.'

Christened in 1927 by Bessie Wallis Warfield, niece of the ship's namesake Solomon Davies Warfield and future Duchess of Windsor, the S.S. President Warfield plied the waters of the Chesapeake Bay without fanfare for twenty years. That is, unless you count the experiences of folks like Hans and Frieda Marx of Baltimore. To them, the Warfield was historically important before it became so to the rest of the world. In 1940, the Warfield became, as Hans puts it, 'My Honeymoon Boat' (see the back side of the plate). Photos included here picture him and his bride on various trips aboard the Warfield throughout the 1930s and 40s before it became internationally famous.

Amid the physical and social rubble of WWII, there were an estimated 100,000 Jewish refugees in Europe alone. The formation of a homeland for these Displaced Persons was being widely and passionately debated. In 1947, at the height of this debate, the Warfield, jreturned from her service in World War II and headed for the scrap heap, was secretly purchased by a Zionist group called the Haganah with whom she would begin her next and most famous chapter of life.

With her volunteer crew of Jewish-American sailors and a new name, she left the Chesapeake Bay for the last time, headed for France where she, newly christened the S.S. Exodus 1947, would take on 4500 Jewish refugees and their dream of a new home, perhaps in Palestine. She nearly made it. But her trip and their deliverance was interrupted 20 miles from Haifa near the coast of Palestine when she was rammed by two British destroyers as she tried to breach their immigrant blockade and land her passengers on new soil.

She survived the British destroyers, barely, and with what she had left, delivered her cargo to dry land. But her passengers were abruptly loaded onto waiting ships and returned to Europe - temporarily - and the S.S. Exodus 1947 was eventually laid to rest there off Shemen Beach.

But back when she was still the S.S. Warfield, following her service in Normandy during WW2, before her purchase by the Haganah, this ship of notable service had been sold to the Potomac Shipwrecking Company and was headed for the scrapyard. When the honeymooner Hans Marx (an award winning photo-journalist for the Baltimore Sun who loved all things steam-powered) learned of her potential dismantling, he hustled down to the harbor and asked if he might grab a couple of souvenirs from his Honeymoon Boat. Given the green light, he did a little dismantling of his own, going straight for the most important piece of any man-made beast of burden: a Builder's Plate. The SS President Warfield was built by Pusey and Jones Corp., Wilmington, Delaware. The Hyde Windlass Corporation of Bath Maine built deck machinery for sailing vessels, including the SS President Warfield.

The builder's plate on a ship or locomotive equates with a machine's soul for those men who feel a bond with their steam-powered partners. This heavy round bronze plaque cast with the ship's name, date of 1928 and name of a ship equipment manufacturer, will be offered here along with photographs of Hans and Frieda and the S.S. Warfield of the Old Bay Line before she became The Exodus 1947.

Provenance: From the estate of Hans Marx, Baltimore, Maryland to the Collection of Ed McHugh, Massillon, Ohio

Very good condition throughout, no damage, repair or heavy wear.