See Sold Price
Sell a Similar Item
Don't Miss Your Next Treasure.
Set up a search alert to hear when Coins items arrive. 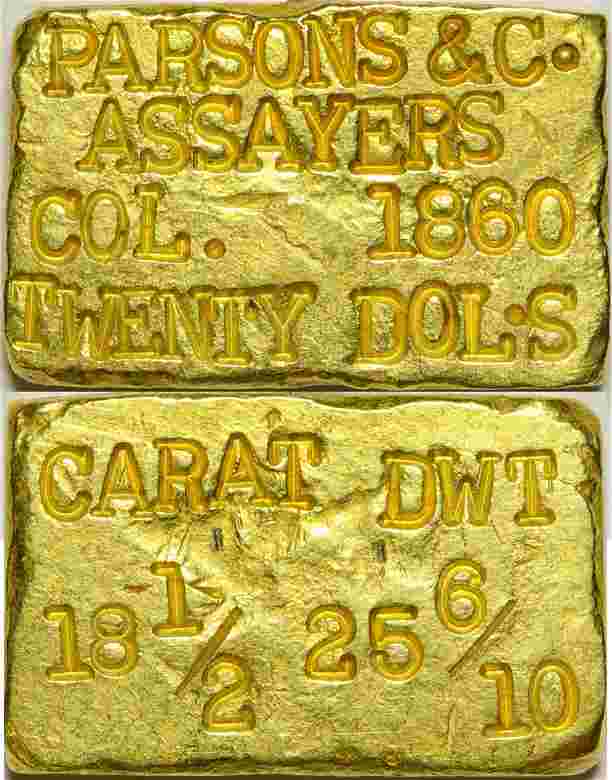 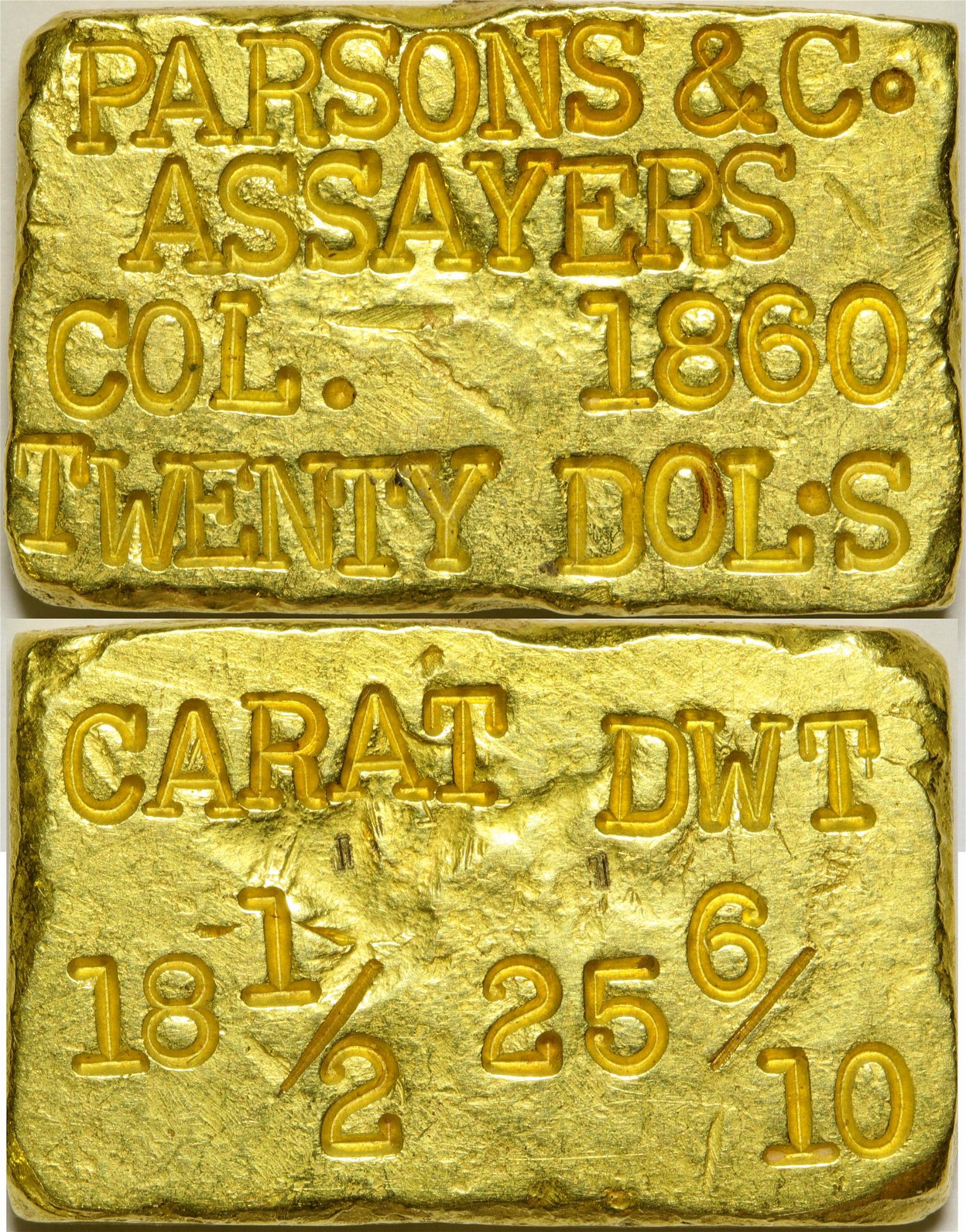 Parsons Gold Ingot: "Parsons & Co. / Assayers/ Col. - 1860/ Twenty Dolls// CARAT DWT/ 18 1/2 25 6/10" rectangular, 1.2 x 0.75". 1.26 Troy Ozs.
About twenty years ago, we published an article in Colin World "Ingots: The Good Bad and the Ugly". In this article we discussed finding four of these in our research of collections around the country, including one at the Smithsonian. I call these "the original four". We were able to run some tests on two of them as I recall, but at the time I never had a sample of placer gold from the historical source of where Parsons reportedly mined, which I would have used in comparative analogy. Other advanced technology was in its infancy. This ingot came out of an old Colorado collection, but like the others, the ultimate provenance is completely unknown.
Over the years, we were lucky and found an original map showing the locations of where Parsons worked, as shown on a previously unknown 1865 map of the district. Today, I'd love to go to the spot, get the gold myself, and make comparative tests with both ICP and SEM/EDS. But this is an academic pursuit of which funding would need to be secured, and life moves on....
Today, this ingot has been presented to us to sell, and for me to openly discuss my thoughts.
During the course of research years ago, I found an 1880 reference to Parsons and his ingots, but no specifics were ever mentioned. I plowed through days of early Colorado newspapers looking for tidbits, but came up mostly empty. This I expected, because Parsons was in a very remote area far outside of the reporting area of the Denver newspaper in 1860.
The big question is this: are all four ingots fakes?, or is one of the four an original, from which the others were copied? and if so, which one is real? Two of the original four are in museums and their donation or purchase data shows acquisition after 1960, as I recall. There is no provenance on any of them, which makes it more difficult. But this is actually the norm- Historical ingots came out of the woodwork when Ford and Franklin worked the West in the 1970's. After the Gold Reserve Act was repealed in 1975, precious metal items came out like water, especially after gold and silver prices rose to new heights. People needed money, and out came their old gold and silver items, sold into the bullion market. Many legitimate great pieces were "discovered". Then came the SSCA, which clearly showed the cultural influence on marking ingots over time, which helped all understand the assayer markings system better. One of my all-time favorites was getting a silver Knight assay ingot (Marysville) right from the family who had used it as a paperweight.
I have little doubt that at least two of the "original four" Parsons ingots are fake. I have a very high confidence that the other two may be fake as well, based on comparative analogy of other known original ingots. But it must be remembered that Parsons was not part of the California or eastern assay business, and he therefore had no prior knowledge of how assayers customarily marked their ingots. We also know, absolutely, that parts of the assayer business in Colorado developed differently from that in California and Nevada. This makes sense, because there was little or no crossover in assayers until the Denver Mint began their work. By the way, please don't forget that there is a real 1865 gold ingot from the Denver Mint at the Colorado Historical Society, complete with provenance to 1929, and I believe we closed the gap all the way back to 1865 with newspaper research. That ingot is marked in the "standard" manner, though the marking methods were dictated by the Mint system.
Can we prove absolutely that all four are fakes? No. Can we prove absolutely that one of the four is real? Someday, perhaps. The technology absolutely exists today to allow for detailed analysis that would help render an opinion, much of which I and we do all the time for unpublished project work. But it takes a budget. SOLD AS A FANTASY. State: City: Date: