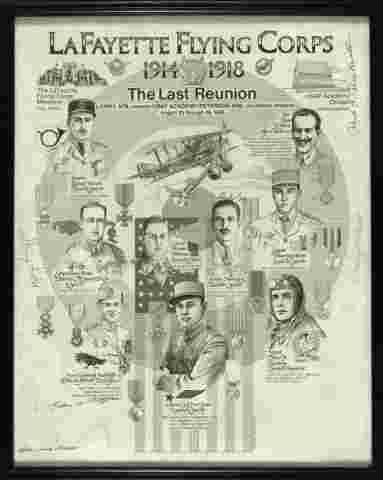 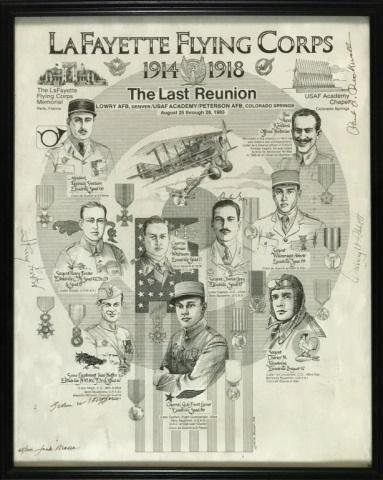 World War One, France--Lafayette Flying Corps "Final Reunion" group (25 pc). The following group, which includes letters written by WWI pilots Henry Forster and Wainwright Abbott to Dr. Walter Powell, are all connected to their attendance at the "Final Reunion of the Lafayette Flying Corps" held at the US Air Force Academy in Colorado Springs on August 25-28, 1983. Four of the known survivors were present--and at the reunion, Dr. Powell announced another survivor had been located--Edgar Hamilton--sharing a letter of greeting from him._x000D_
The group includes: (1) Large framed limited edition poster , numbered 65 of 100, produced for the Final Reunion of the LFC, and signed by four survivors: Sergent Henry Forster, Sergent Wainwright Abbott, Sous Lieutenant Jean Huffer, and Paul Ayres Rockwell; Notebook with 7 items enclosed, including (1) copy of letter from Dr. Walter Powell to Henry Forster dated Sept. 2, 1983; (1)--3 page handwritten letter from Forster dated Nov. 15, 1982 to Dr. Powell. He writes in part: "Of the 135 pilots who survived the war, only 6 remain. . .Through a strange combination of circumstances which I could never understand, I had a most undistinguished career but at the end, just before I transferred to the Navy and for maybe 10 days afterwards, I was with a very fine and active French squadron--Spa. 15m G.C. 13. I may have been 2 months or so with them. The great French ace, Nungesser, whom I knew, was in our group. . ." (1) handwritten 4 page letter from Forster to Dr. Powell dated December 6, 1982, providing more details of his service: "My service at the front was incorrectly described. Although I went out early in February, in the strange section Spad that I was in, we had no machine guns so I could scarcely say I was at the front till March 8th, 1918, when I joined C.74 at or near Bray Dunes (near Dunkirk). On April 10 I went to Spa. 102 and on April 20 to BR. 224, Section Spa. I became a Sergent (spelt the French way) on May 16th. From about that time to July 28 was in Spa. 15, Groupe de Combat (G.C.) 13. This will straighten out the errors in the article. . ." (1) Photostat page of Forster's biography with photo, autographed by Forster in ink; (1) 2 page handwritten letter by Forster to Dr. Powell dated Feb. 6, 1983. He wrote in part: "I never flew a bomber-type plane till I went to England in August 1918 for training. The Americans never had a plane at the front--rather disgraceful. Our men flew in American uniform in French, British, and Italian planes, and maybe others. . ." (1) handwritten 2 page letter from Forster to Dr. Powell dated Oct. 6, 1983 commenting on Edgar Hamilton--one of the survivors of the Lafayette Flying Corps honored at the "Last Reunion"; (1) four page handwritten letter by Forster to Dr. Powell dated Nov. 11, 1983, commenting on a draft of an article that Dr. Powell had sent him;(1) two page handwritten letter dated December 5, 1984; Notebook with (11) items enclosed related to Wainwright Abbott, including (1) handwritten letter to Dr. Powell dated 18 Feb. 1983; (1) copy of letter from Dr. Powell to Abbott dated November 10, 1983; (1) three page handwritten letter from Abbott dated November 23, 1983; (3) three 4x6 bw WWI copy photos of Abbott with two colleagues; (2) copies of letters from Dr. Powell to Abbott dated December 3, 1983 and Jan. 5, 1984; (1) brief handwritten note from Abbott dated Jan. 16, 1984; (1) detailed 2 page handwritten letter by Abbott on May 28, 1984 commenting on his background and subsequent service in France. He writes in part: "I was born in Pittsburgh April 27, 1891. My father's family were Yankee from Connecticut, my mother was a Wainwright. The family originally living on Wainwright Island, in the Allegheny River, & later in Lawrenceville, that is now part of Pittsburgh. My father was Chairman of the Board of the Carnegie Steel Company. I went to St. Paul's School, Concord, New Hampshire. I grew up with Bill Thaw in Pittsburgh. He, Victor Chapman, Elliot-Cowden, Maury Jones and Joyce Whitmore were all St. Pauls' of my day--Whitmore, was in a bad fall at training, invalided out. After a Freshman year at Yale I joined my parents in France, where they spent most of their time. . ." (1) two page handwritten letter from Abbott dated October 29, 1984 in which he talks at length about his relationship with William "Bill" Thaw--one of the founders of the Lafayette Escadrille; (2) copies of articles from Dr. Walter Powell entitled "The Final Reunion of the Lafayette Flying Corps" and "The Lost Member of the Lafayette Flying Corps" (1) souvenir program from the "Final Reunion" (wraps, 14pp--with bio sketches of each of the survivors); (1) souvenir brass paperweight, inscribed on front "1983 Final Reunion" with LFC Insignia;" rear inscribed "Lowry A.F.B., August 25; U.S.A.F.A. August 26; Peterson A.F.B. August 27, U.S.A.F.A. Chapel, August 28." (1) Framed poster signed by 36 aces produced for the November 7-12, 1981 Reunion of "Aces of the First Air War, 1914-1918" held in Paris as presented "To The U.S.A. Committee with admiration and gratitude." The poster was produced and distributed by the Glasebrook Foundation in 1981. The signatures are copies--not original. Poster is not matted and placed in modest plastic frame measuring 17"x21."