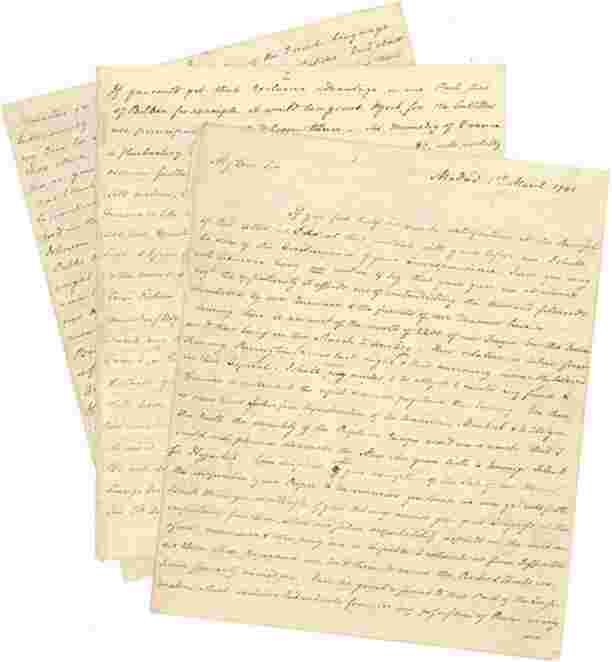 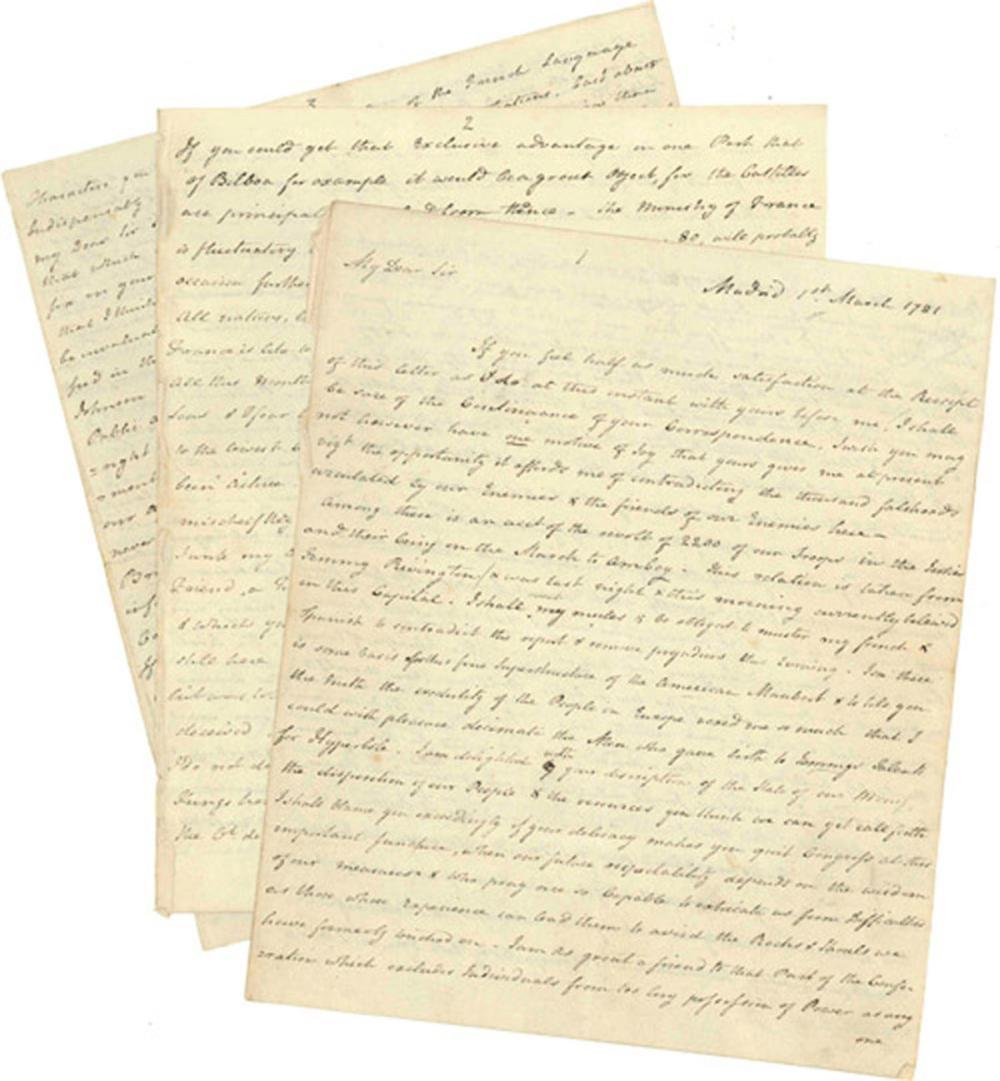 ALS, 12 pp, 7.75" x 9", dated Madrid [Spain] March 1, 1781. Gerry's endorsement acknowledges the receipt and dates of the letter, as well as the date of his response. The writing is clear and dark. In 1776, Gerry was one of the signers of the Declaration of Independence.

"The situation of Europe is critical at present and puzzles much better politicians than myself to divine what it will be some months hence. Prussia who had the armed Neutrality hath not yet taken a decided part & to retard this, the Emperor hath prepared his mediation Jointly with the Empress to terminate the present disputes. This offer I believe is not well timed nor at Bottom is it well received. I have been assured that our friends will make our Independence the basis of their acceptation of it."

"The Dutch war is not so impolitic as we may imagine. The ruin of their Commerce will inrich individuals most attached to government & the restoration of their Possessions will be good compensation for the sacrifices G. B. [Great Britain] may be constrained to make"

"The Dutch seem in good spirits, but I am afraid they are too much disposed to think that G.B. wishes finish their disputes with them. This conduct of G.B is meant to relax their preparations & those of the Armed Neutrality who may be disposed to support them. However you will receive much more accurate information from Mr. Adams who is on the spot. I am informed that he is on the point of opening a loan for the States. May it be attended with success, for we din great difficulties here to procure money here"

"The English fleet is at sea – on the 8th of last month they had 30 sail of the line ready…This is the latest & most excel state of their actual Marine force that I have been able to obtain. If our Frigates could carry 18 pounders instead of 12 pounders we should a great advantage & if our Privateers could have 9 & 12 pounders although few in number we should have equal advantage. The weight of metal would give a superiority & as our cruisers I suppose cannot be completely manned, the guns being fewer would be better served. Congress ought to send ample powers to Mr. Adams to act in Holland & ought to authorize him to regulate the terms of advantages arising from recaptures of Dutch vessels on the same principles of those adopted by our Ally. In every thing we ought to mask the strongest desire to conform to the present system of Europe as pointedly as possible mask our opposition to the practical measures of our foreseen Mother Country"

"Perhaps this long letter may fall into the hands of the Philistines. Let it tell them that I pity almost as much as I despise them. Their gallantry and firmness in a bad cause excites my compassion, while their abject subjection to a Junto of would-be great men moves my contempt, mingled with visibility and indignation. Gracious Heaven, to see the mischief that a single individual can do. If anything could reconcile me to private assassination, this reflection would do it".

William Carmichael was a diplomat and a man of fortune who resided in London at the beginning of the Revolution. He was on his way to America in July of 1776, with dispatches from Arthur Lee, but was detained in Paris by illness, and assisted Silas Deane in his correspondence and business for over a year. He communicated with the King of Prussia, at Berlin, intelligence concerning American commerce, and assisted the commissioners at Paris. He is the one who convinced the Marquis de Lafayette to visit America, introducing him to George Washington. After his return to America in 1778, he was a delegate to congress from Maryland from 1778-1780. He was secretary of legation during John Jay's mission to Spain, and when the latter left Spain in June of 1782, he remained as charge d'affaires. In March of 1792, William Short joined him in a commission to negotiate a treaty with Spain regarding the navigation of the Mississippi River, but they were unsuccessful. Carmichael returned to the United States in May of 1794. His letters were published in Sparks's "Diplomatic Correspondence".