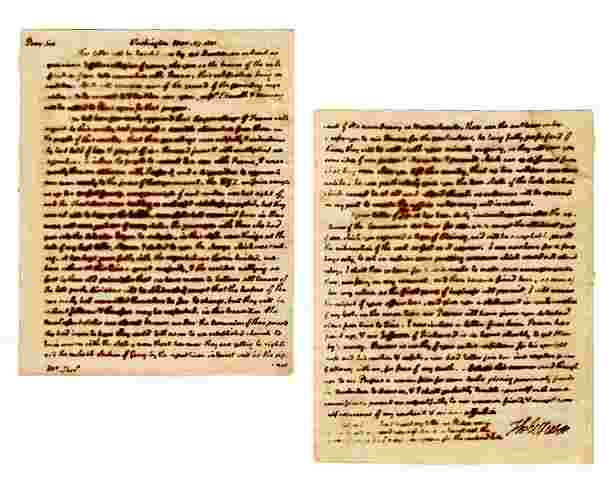 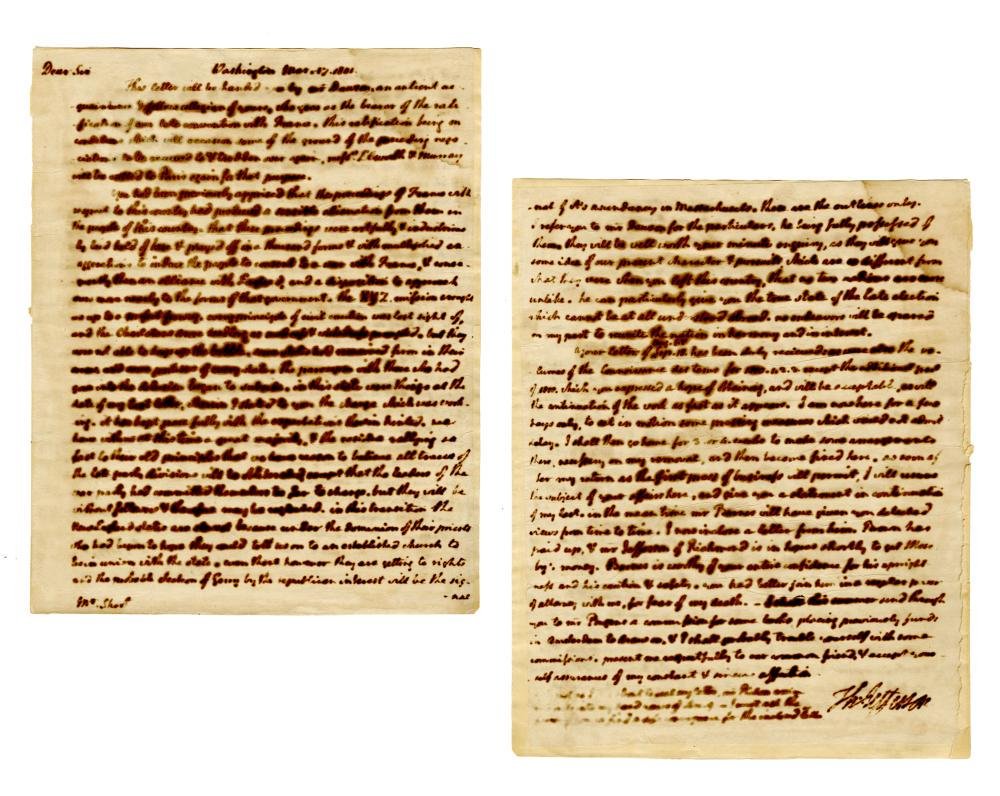 Declaration Signer Thomas Jefferson Fantastic Letter Written Shortly After His Inauguration: "no endeavors will be spared on my part to reunite the nation in harmony and in interest"

In this letter to his "adoptive son" William Short, signer of the Declaration of Independence and new President Thomas Jefferson rejoices that the nation is reuniting after the divisive election of 1800 and overly optimistically predicts "all traces of the late party divisions will be obliterated." He details his plan to remain in Washington for a few days before returning to Monticello for a few weeks to make arrangements before settling permanently in Washington for his presidency. He accuses Federalists of exaggerating differences with France to gain an alliance with Great Britain but declares their efforts a failure except in New England, which is slowly transitioning away from Federalist "dominion."

Short received this letter two months later, in mid-May. He had returned to Paris from Spain to resume his romance with Alexandrine Charlotte de Rohan-Chabot, the Duchesse de La Rochefoucauld (1763-1839). On June 9, Short responded to Jefferson that "nothing could give me more solid & real satisfaction than to see the nation reunited in harmony & interest...."


This letter will be handed you by Mr Dawson, an antient acquaintance & fellow collegian of yours, who goes as the bearer of the ratification of our late convention with France. This ratification being on conditions which will occasion some of the ground of the preceding negociations, to be recurred to & trodden over again. Messrs. Ellsworth & Murray will be called to Paris again for that purpose.


You had been previously apprised that the proceedings of France with respect to this country had produced a sensible alienation from them in the people of this country. that these proceedings were artfully & industriously laid hold of here & played off in a thousand forms & with multiplied exaggerations to induce the people to consent to a war with France, & consequently then an alliance with England, and a disposition to approach ours more nearly to the forms of that government. the XYZ. mission wrought us up to a perfect frenzy. every principle of civil caution was lost sight of, and the Charlatans drove headlong as madness & wickedness prompted. but they were not able to keep up the bubble. some states had remained firm in their senses, and some portions of every state. the paroxysm with those who had gone into the delusion began to subside. in this state were things at the date of my last letter, wherein I stated to you the change which was working. it has kept pace fully with the expectations therein hinted. we have with us at this time a great majority, & the residue rallying so fast to their old principles that we have reason to believe all traces of the late party divisions will be obliterated; except that the leaders of the war party had committed themselves too far to change. but they will be without followers & therefore may be neglected. in this transition the New England states are slowest because under the dominion of their priests who had begun to hope they could toll us on to an established church to be in union with the state. even there however they are getting to rights and the probable election of Gerry by the republican interest will be the signal of it's ascendancy in Massachusets. these are the outlines only. I refer you to mr Dawson for the particulars, he being fully possessed of them. they will be well worth your minute enquiry, as they will give you some idea of our present character & pursuits, which are so different from what they were when you left this country, that no two nations are more unlike. he can particularly give you the true state of the late election which cannot be at all understood abroad. no endeavors will be spared on my part to reunite the nation in harmony and in interest.


Your letters of Aug. 6: & Sep. 18. has been duly recieved: as were also the volumes of the Connoissance des tems for 1800. 1. 2. 3. except the additional part of 1800. which you expressed a hope of obtaining, and will be acceptable, as will the continuation of the work as fast as it appears. I am now here for a few days only, to set in motion some pressing measures which would not admit delay. I shall then go home for 3. or 4. weeks to make some arrangements there, necessary on my removal, and then become fixed here. as soon after my return as the first press of business will permit, I will resume the subject of your affairs here, and give you a statement in continuation of my last. in the mean time mr Barnes will have given you detached views from time to time. I now inclose a letter from him. Brown has paid up, & mr Jefferson of Richmond is in hopes shortly to get Moseby's money. Barnes is worthy of your entire confidence for his uprightness and his caution & safety. you had better join him in a regular power of attorney with me, for fear of my death.—I shall this summer send through you to mr Pougens a commission for some books, placing previously funds in Amsterdam to draw on, & I shall probably trouble yourself with some commissions. present me respectfully to our common friend, & accept yourself assurances of my constant & sincere affection.


P.S. Just as I was about to seal my letter, mr Pichon arrives and puts into my hand yours of Dec. 9.—I must ask the favor of you to find a safe conveyance for the inclosed letter."

William Short (1759-1849) was born in Virginia and graduated in 1779 from the College of William and Mary, where he studied law under George Wythe. Thomas Jefferson was one of his examiners for admission to the bar, and Short settled in Richmond to begin his law practice. He served on the Executive Council of Virginia. He served as Jefferson's private secretary in France from 1784 to 1789, and Jefferson even referred to Short as his "adoptive son." When Jefferson returned to the United States, Short remained and served as minister to France from 1790 to 1792, then served as minister to Spain from 1794 to 1795. He then returned to Paris and remained there until 1802, when he returned to the United States. In 1808, President Jefferson appointed Short as the first minister to Russia, but the Senate refused to send any ambassador to Russia. In 1810, Short returned to the United States for good. He became a successful financier and made himself a millionaire.

A letterpress is the author's own ink and exact writing pressed onto another sheet. Outside of institutions these are very rare.

The "copying press" was a timely invention by James Watt, a Scottish engineer better known for his development of the steam engine.

The press was eventually integrated into none other than George Washington's management of records. Soon other busy government officials followed in Washington's footsteps. Scottish engineer James Watt and English engineer Matthew Boulton had formed a partnership headquartered in Birmingham, England to manufacture steam engines. In the course of his work, Watt found the hand copying of business letters, drawings, and design specifications had become increasingly burdensome. In 1780 Watt patented an invention that copied all of his business papers. Washington received his machine just two years later in the latter half of 1782.

Watt discovered a method of applying plain moistened paper with pressure to a freshly written letter so the ink from the original would be offset onto the copy paper. Watt patented two models, a rolling press and a screw press. The rolling press consisted of two superimposed parallel rollers mounted on a frame that was clamped to a table. Springs within the frame helped control the pressure of the rollers when they were turned by a lever. The letter to be copied was placed on a board, covered by a thin piece of dampened copying paper and then by a felt-like cloth. The board was passed through the rollers slowly one way and then rolled back through again. The screw press was based on the same principle but involved screwing two blocks of wood or metal together, rather than using rollers.

Through the years, improvements in unsized copying paper produced sheets that were tissue thin so the reverse image could be seen through the paper and be read in a normal fashion. The copy machine was accompanied by dampening and wetting boxes, vials for measuring spring water, and dampening brushes, all to moisten the copy paper. Watt also developed special inks that produced durable, clear originals. Sponge paper was used to dry the original letter after the copy was made, and oiled papers could be placed on the letter board in order to increase the pressure of the rollers if needed.