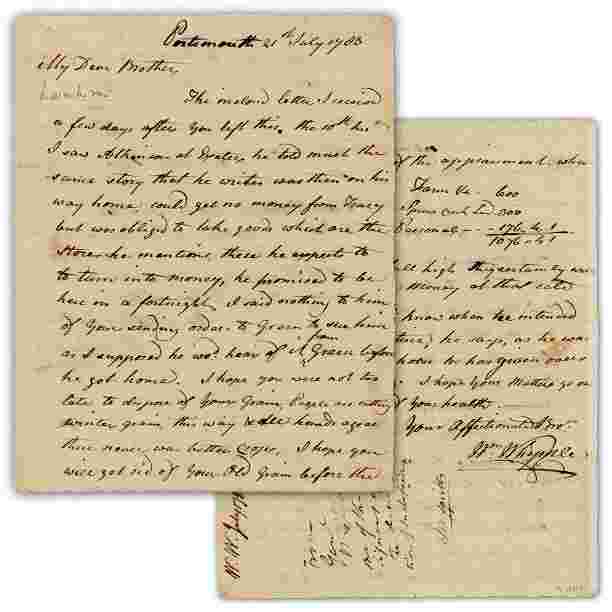 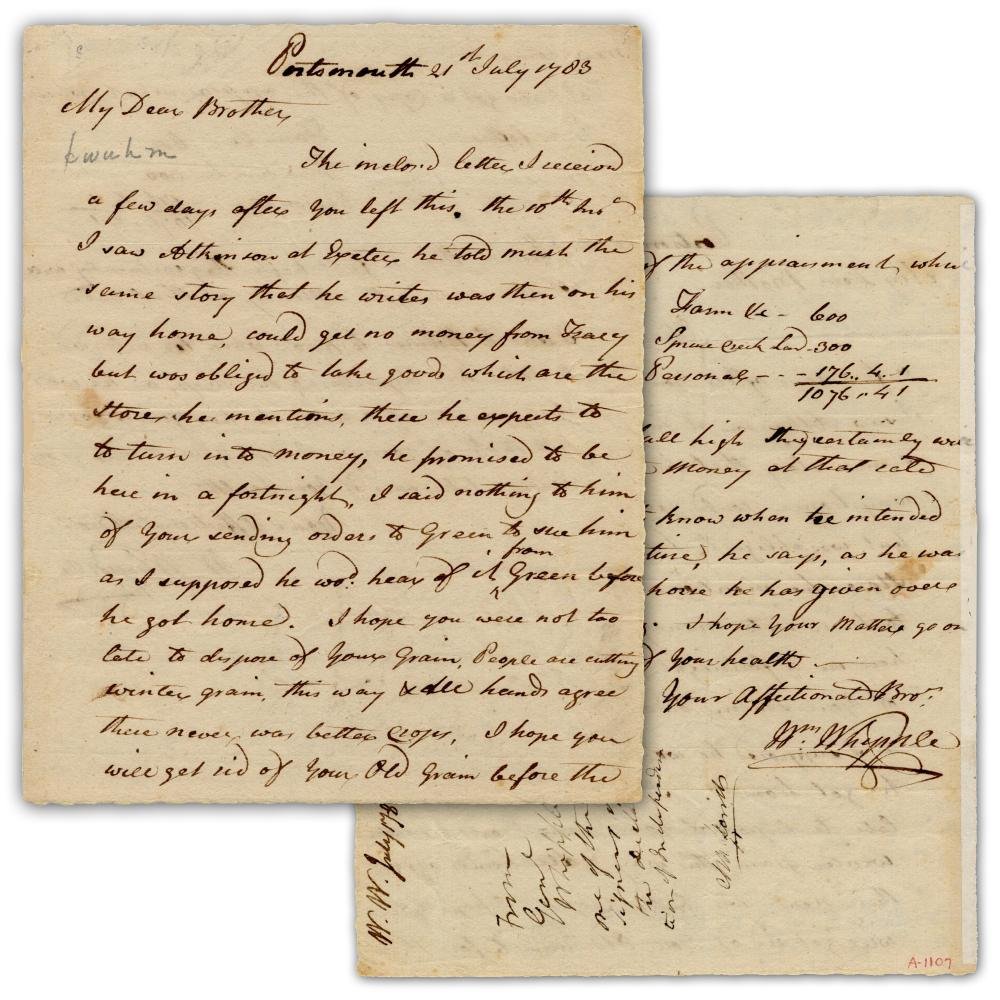 William Whipple writes from Portsmouth to his brother regarding business matters, including prospects for an excellent crop of grain.


The inclosed letter I received a few days after you left this. the 10th Inst I saw Atkinson at Exeter he told me much the same story that he writes was then on his way home, could get no money from Tracy but was obliged to take goods which are the stores he mentions, these he expects to turn into money, he promised to be here in a fortnight. I said nothing to him of your sending orders to Green to see him as I supposed he wod hear of it from Green before he got home. I hope you were not too late to dispose of your Grain. People are cutting winter grain, this way & all hands agree there never was better crops. I hope you will get rid of your Old Grain before the new comes on.


I have got a copy of the appraisment, which is as follows


I think this is full high they certainly will not command the money at that sale I sent to Holmes to know when he intended to take his departure, he says, as he was disappointed of a horse he has given over all thots of going. I hope your matters go on well. Take care of your health.


[Endorsement:] From Genl Whipple, one of the signers of the declaration of Independence / [?]

William Whipple (1730-1785) was born in Maine and became a shipÂ's master at the age of 21. He earned a fortune in trade with the West Indies, shipping cargoes of wood, rum, and slaves. In 1759, he established himself as a merchant in Portsmouth, New Hampshire. He served in the New Hampshire Provincial Congress and represented New Hampshire in the Continental Congress, where he signed the Declaration of Independence. He also commanded a brigade at the Battle of Saratoga and negotiated the surrender of the British forces there. He freed his slave Prince Whipple (1750-1796) in February 1784, believing that no man could fight for freedom while holding another in bondage. After the war, William Whipple served as an Associate Justice of the Superior Court of New Hampshire.

Joseph Whipple (1738-1816) served as a member of the New Hampshire General Court from 1776 to 1778, from 1782 to 1783, and again in 1785. He was briefly a colonel in the New Hampshire militia after the Revolutionary War. He and his brother William were partners in a mercantile business in Portsmouth, New Hampshire. Joseph Whipple was the Collector of Customs in Portsmouth beginning in 1786, and President George Washington reappointed him in 1789 under the new federal government. Although he was initially a strong Federalist, by 1794, Whipple had joined the Republicans. President John Adams removed him from office in 1798, but President Thomas Jefferson reappointed him to the post in 1801, and he held it until near his death. Whipple also served as the Superintendent of the Lighthouse and the Agent for Fortifications in Portsmouth. In 1796, Whipple became involved in attempts to return runaway slave Oney Judge Staines (1773-1848), who had fled George and Martha Washington while working at the PresidentÂ's house in Philadelphia. Whipple refused to place her on a ship to Virginia against her will for fear of an abolitionist riot, but he informed Washington that she would return voluntarily if the Washingtons promised to free her following their deaths. In an angry response, Washington refused to consider Judge StainesÂ's proposal. After leaving the presidency, Washington attempted unsuccessfully to have her brought back forcibly, but refusing to pursue the public provisions of the 1793 Fugitive Slave Act, which he had signed into law. Judge Staines remained in New Hampshire, married, learned to read, and raised three children.