The Beatles Signed Vintage Photo Circa 1962, 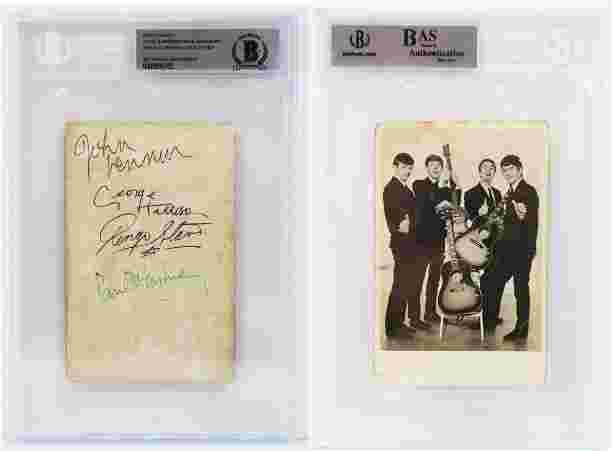 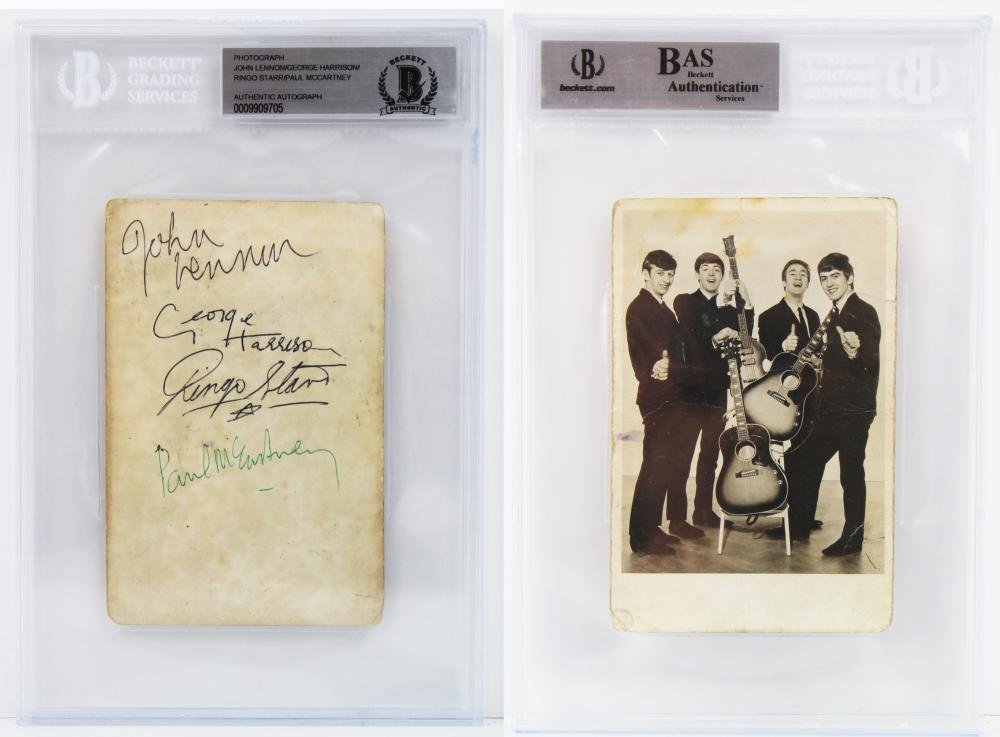 
The Beatles Signed Vintage Photo Circa 1962, Authenticated and Encapsulated by Beckett

Fantastic Signed Glossy Vintage Black and White Photo, Circa 1962. Boldly signed by the Fab Four on the verso in large vibrant superb signatures "John Lennon", "George Harrison", "Ringo Star", and "Paul McCartney". McCartney's signature is in green ink and Ringo placed a "star" below his name. The photograph is 3.5" x 5.5", and the Beckett encapsulation is 6" x 9". Accompanied by a Letter of Authenticity from "Tracks Ltd" with the additional information regarding the provenance of the piece as shown below:

"This is to confirm the authenticity of the item listed and illustrated herein: an early Beatles promotional photograph that has been autographed on the reverse by The Beatles in ballpoint pen. The autographs were sent so a fan by Ringo Starr after a female Beatles fan had written to Ringo to congratulate him on appearing on the Granada TV programme 'People and Places in Manchester.' The group performed their new single 'Love Me Do' on the show. The autographs come with a copy of a letter from the recipient stating this. The photograph was taken in Peter Kaye's photography studios in Liverpool by Les Chadwick in September 1962 … "

The Granada TV Program, with an appearance in Manchester on the local programme People And Places was considered the Beatles Television debut. The show was made by Granada Television, and was broadcast only in the north and north-west of England. It was filmed in Studio Four of Granada TV Centre on Quay Street in Manchester. The Beatles rehearsed before cameras from 3-4pm, and again from 4:15-6pm. The show was broadcast live from 6:35-7pm, and the group sang two songs: "Some Other Guy" and their new single "Love Me Do".

A superb and important signed original vintage photo from the year of their first record contract and television debut in 1962. During 1962 and 1963, they became increasingly popular in Europe. Then came their American debut in early 1964, which was the beginning of their worldwide popularity.

The Beatles Signed Vintage Photo Circa 1962,