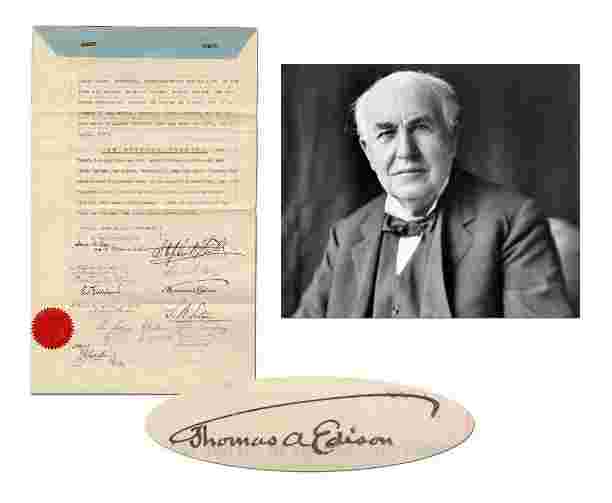 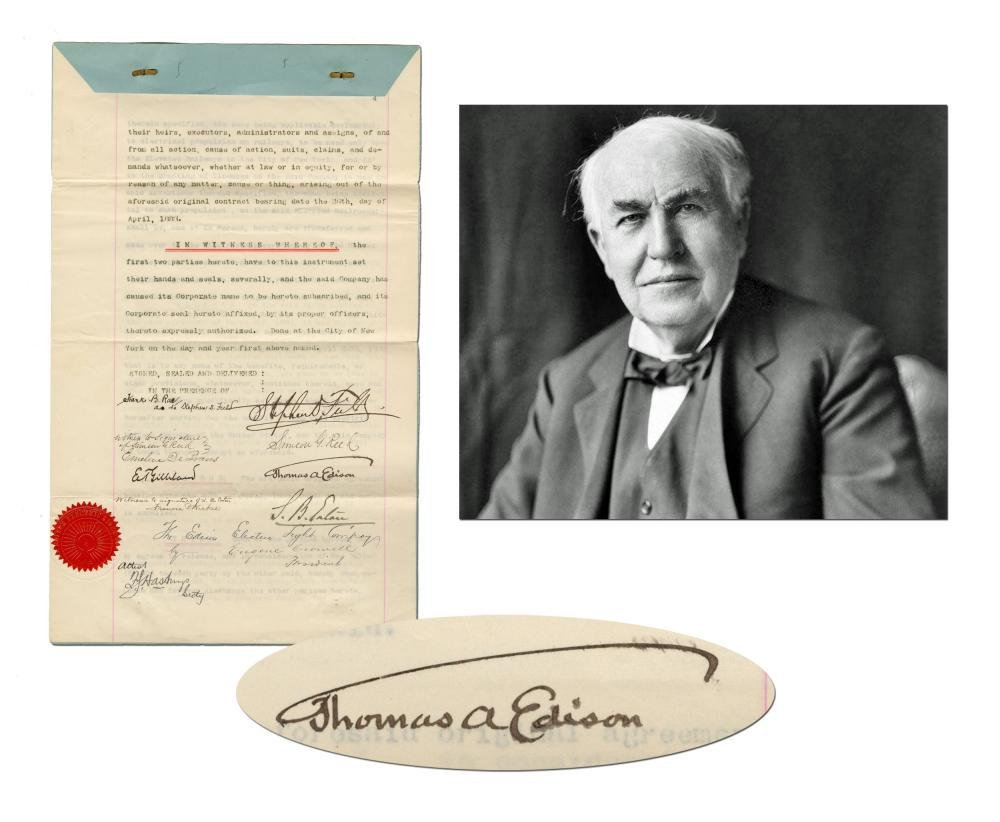 This four-page typed agreement, fastened into a paper cover features the embossed seal of the Edison Electric Light Company depicting a radiant light bulb, and the dark signature of Thomas A. Edison, along with those of other parties to the agreement. The document transferred inventions regarding "electrical propulsion on railways" for use on the Elevated Railways in the City of New York to the Electric Railway Company of the United States. It replaced an earlier agreement that had contemplated the creation of a new corporation to hold the inventions. Other signers of this agreement include:
• Stephen Dudley Field (1846-1913), an inventor in California who held more than two hundred patents and developed the first electric trolley car;
• Simeon G. Reed (1830-1895), an Oregon businessman who make a fortune in the transportation industry and whose fortune established Reed College in Portland;
• Sherburne B. Eaton (1840-1914), a leading New York lawyer, Edison's personal attorney, and the vice president and general manager of the Edison Electric Light Company; and
• Eugene Crowell, the president of the Edison Electric Light Company, the patent-holding company and financial arm for Edison's lighting experiments.

Thomas A. Edison (1847-1931) was born in Ohio and grew up in Michigan. He read widely under his mother's instruction, and began conducting experiments as a child. He became a telegraph operator as a teenager and moved to Louisville, Kentucky, in 1866, where he was an employee of the Western Union. He received his first of 1,093 patents in 1869. He moved to New York City and founded a company with fellow telegrapher and inventor Franklin Leonard Pope. Edison established an industrial research laboratory in 1876 in New Jersey, with proceeds from the sale of his quadraplex telegraph. There, many employees carried out research and development under his direction. Among his most prominent inventions were the incandescent light bulb, the phonograph, and a motion picture camera. In 1878, he formed the Edison Electric Light Company in New York City with several financiers and first demonstrated his incandescent light bulb on December 31, 1879. During World War I, Edison conducted research in Florida to find a domestic source of natural rubber.