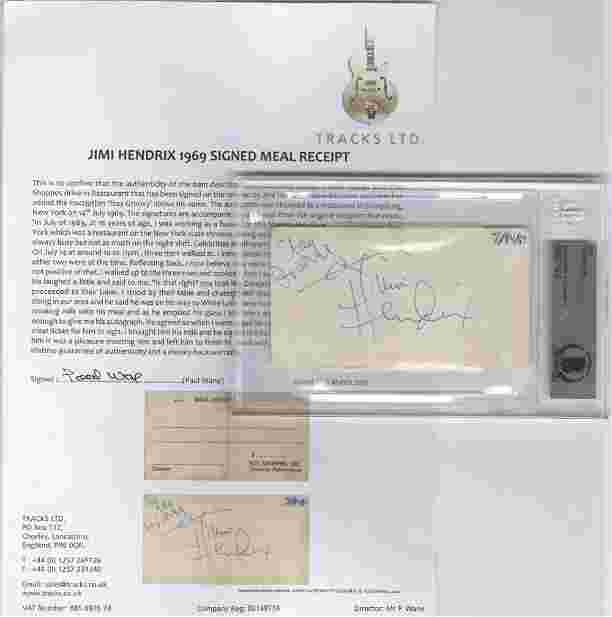 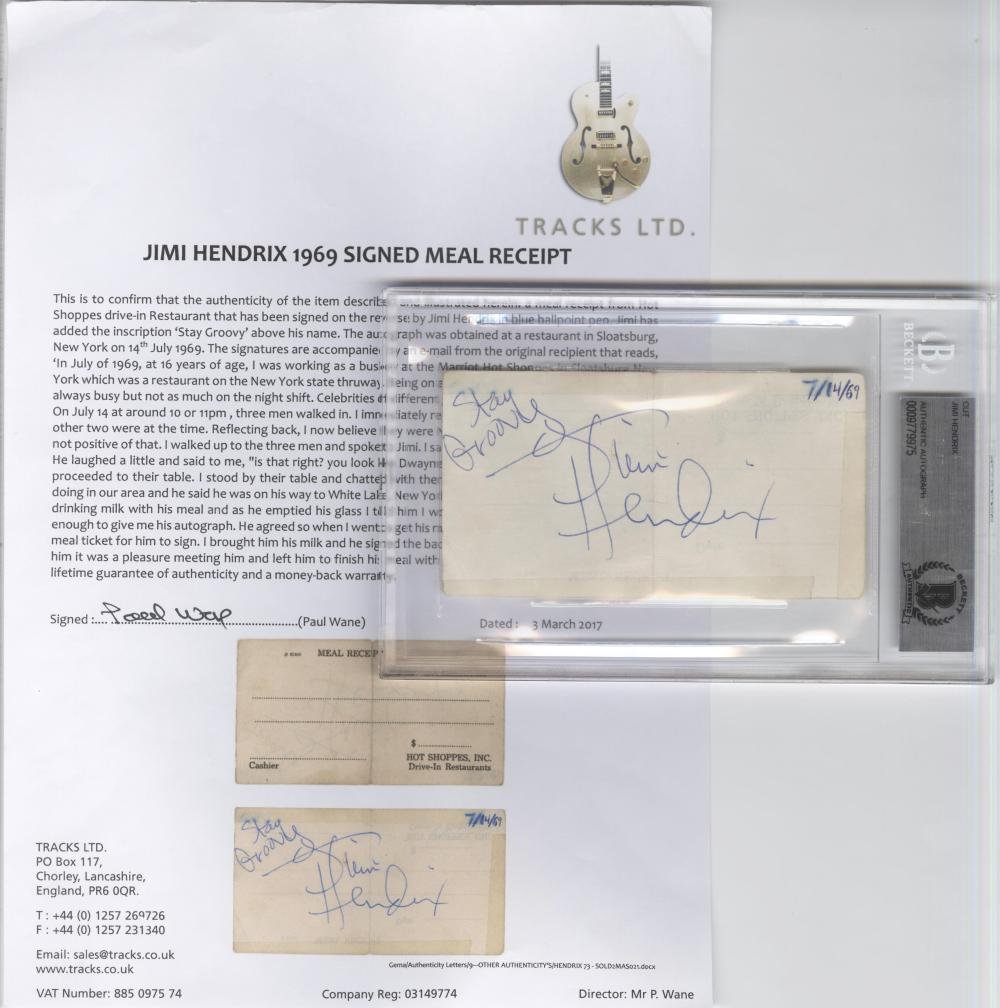 
Jimi Hendrix Signed Ticket, Authenticated and Encapsulated by Beckett, One Month Before Woodstock!

Encapsulated and authenticated Jimi Hendrix signature on the back of a Marriot Hot Shoppes (NY State Thruway) Meal Ticket, 5" x 2.5". Signed, dated by Hendrix ONE month before Woodstock!, who adds the desirable iconic 60's phrase "Stay Groovy / Jimi Hendrix" ". Dated "7/14/69", Encapsulated to a completed size of 7" x 4.5". Supportive tape along outer edge. Verso with the imprint from the Marriot of:

Accompanied by the Important letter of provenance placed on "Tracks LTD" letterhead describing how the signature was obtained:

"This is to confirm that the authenticity of the item described and illustrated herein: a meal receipt from Hot Shoppes drive-in Restaurant that has been signed on the reverse by Jimi Hendrix in blue ballpoint pen. Jimi has added the inscription "Stay Groovy" above his name. The autograph was obtained at a restaurant in Sloatsburg New York on 14th July 1969. The signatures are accompanied by an e-mail from the original recipient that reads 'In July of 1969 at 16 years of age, I was working as a busboy at the Marriot Hot Shoppes in Sloatsburg New York which was a restaurant on the New York State Thruway. Being on a major thoroughfare the restaurant was always busy but not as much on the night shift. Celebrities of different genres would stop in from time to time. On July 14 at around 10 or 11 pm, three men walked in. I immediately recognized Jimi but I wasn't sure who the other two were at the time. Reflecting back, I now believe they were Noel Redding and Mitch Mitchell but I'm not positive of that. I walked up to the three men and spoke to Jimi. I said "hey man, you look like Jimi Hendrix". He laughed a little and said to me, "is that right? You look like Dwayne Eddy". The three of them laughed and proceeded to their table. I stood by their table and chatted with them for a while. I asked Jimi what he was doing in our area and he said he was on his way to White Lake, New York, about 50 miles further north. Jimi was during milk with his meal and as he emptied his glass I told him I would get him a refill if he would be kind enough to give me his autograph. He agreed so when I went to get his milk so I also grabbed a Marriot Hot Shoppes meal ticket for him to sign. I brought him his milk and he signed the back of the meal ticket. I thanked him, told him it was a pleasure meeting him and left him to finish his meal with his friends …"

Considering during this period, Hendrix lived in London, one reflects on the location and timing of the signing of this ticket. It was 1969, barely one month before the famous Woodstock Festival which brought together half a million people in a celebration of peace, music and love, (which literally became known as the "Three Days that Defined a Generation"). Hendrix performed there merely a month after the signing of this ticket, closing the entire venue. He stepped onto the stage at the Woodstock, N.Y., Music Festival and embarked upon an uninterrupted set lasting nearly two hours--one of the longest performances of his career. It concluded with a long medley that included the solo performance of the Star Spangled Banner that would become emblematic not only of Woodstock, but of the 1960s themselves. The distance from the Sloatsburg New York to Woodstock is just about 1 hour on the New York State Thruway. And given Hendrix lived in London, perhaps he was in New York at the time surveying and preparing for his performance.

Hendrix died in 1970 from drug-related complications, leaving his mark on the world of rock music and remaining popular to this day.

This well documented item has been authenticated and encapsulated by Beckett, and is accompanied by a Letter of Provenance on Tracks Letter and a Certificate from John Reznikoff, a premier authenticator for both major 3rd party authentication services, PSA and JSA (James Spence Authentications), as well as numerous auction houses.