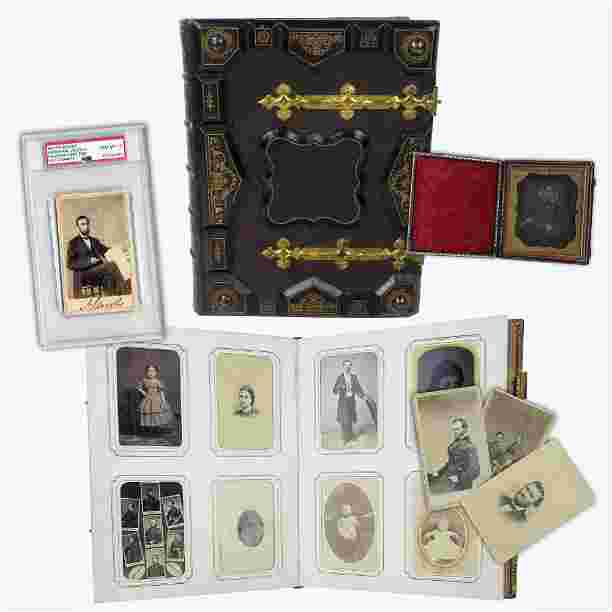 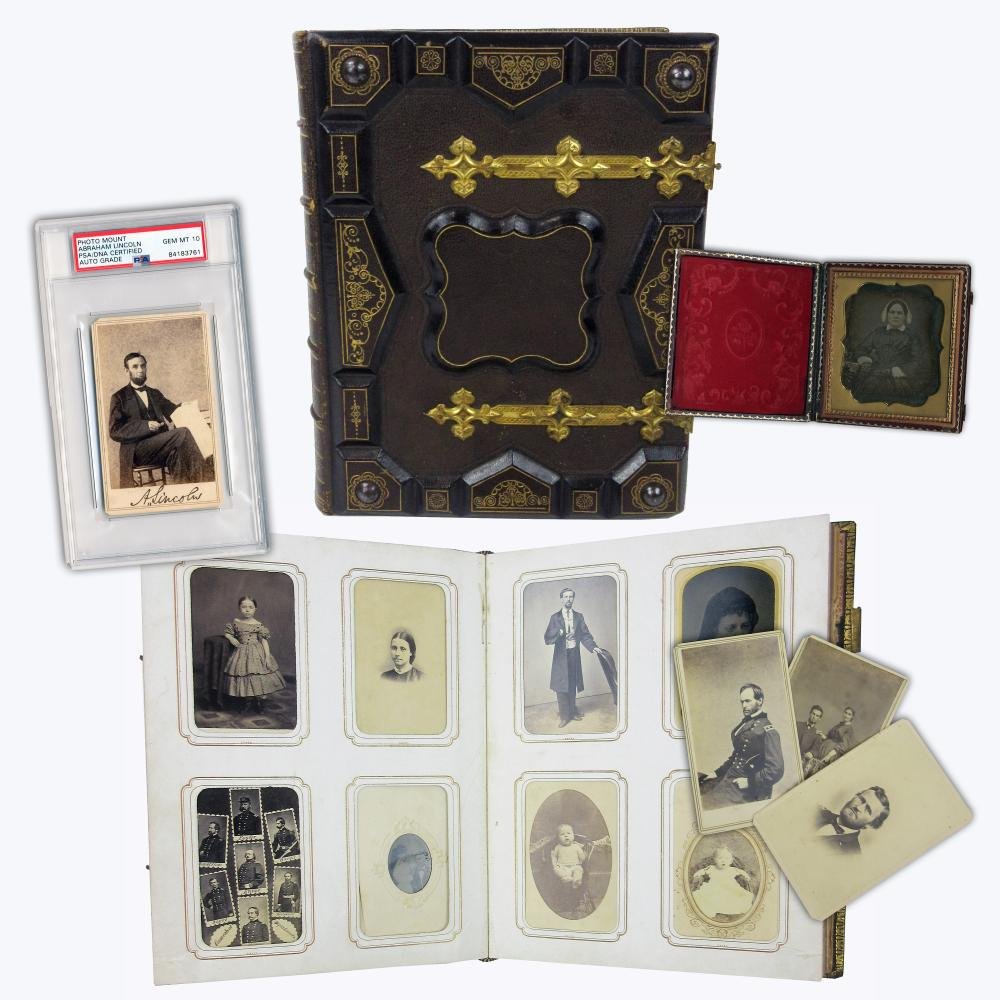 This Lincoln signed Carte de Visite Photograph was found within the personal photo album of Colonel Benjamin Rosson's wife. This magnificent album bears her personal stamp "Hattie Rossen" and in addition contains numerous Rosson family photos placed alongside the CDV's of important notables including this spectacular photograph of The President signed "A. Lincoln". The Lincoln CDV was removed for formal grading and encapsulating by PSA/DNA, receiving the highest offered grade of GEM MT 10. As noted in "The Lincoln Log" On August 23, 1864, Abraham Lincoln personally thanked Colonel Benjamin F. Rosson and the entire 147th Ohio Infantry Regiment for their services shortly before they returned to Ohio. This is most certainly when Rosson received the signed CDV from Lincoln.

Photographer Alexander Gardner (1821-1882) took this photograph as one of a series of President Lincoln on Sunday, August 9, 1863, at Gardner's studio in Washington, D.C. Lincoln had promised to be Gardner's first sitter and chose Sunday to avoid "curiosity seekers and other seekers" on his way to the gallery. Gardner took at least six photographs during the session, all seated. In this image, Lincoln holds his eyeglasses in one hand and a newspaper in the other.

ABRAHAM LINCOLN, Autographed Photograph CDV; image taken August 9, 1863 and signed August 23, 1864. Excellent, bold dark signature. Includes the important and desirable Gardner backstamp Corners elegantly clipped to fit into the included album but not affecting the beauty and barely touching the Gold border in one spot of this large margined example. The corners become a positive when you examine others found within the album. Grant, Sherman, etc. are all similarly modified for a proper fit within the album. This adds another level of comfort to this astounding original provenance, possibly a stronger pedigree than any other signed Lincoln photos extant. Hint of the typical photo foxing which does not detract, mentioned only for accuracy.

Benjamin F. Rosson (1826-1873) was born in Kentucky and served as a private in the Mexican War. In 1852, he married Harriet "Hattie" J. Lathrop (1833-1902) in Butler, Ohio, and they had three daughters. In the early 1850s, he moved to Troy, Ohio, and became a dentist. When Lincoln called for hundred—days regiments in the spring of 1864, Rosson led the 147th Ohio Infantry regiment as its colonel. After this service, Rosson returned to the practice of dentistry in Troy.

The 147th Ohio Infantry Regiment mustered in at Camp Chase, in Columbus, Ohio, on May 16, 1864. It was one of forty—two regiments of the Ohio National Guard that enlisted for one hundred days of service. The 147th Ohio left for Washington, D.C. on May 20 and was assigned to garrison duty at several forts in the defenses of Washington, including Fort Stevens. On July 11-12, 1864, the regiment participated in the repulse of Confederate General Jubal Early's attack on Washington, D.C. The 147th Ohio mustered out on August 30, 1864, at Camp Dennison, Ohio, having lost 22 enlisted men, all due to disease.

Other items in this archive include:

1. Leather 19th century photo album with ornate gilt tooling to the spine and front. Raised bands along spine, heavy and ornate brass clasps. Gilt edges. 7.5" x 9.5" x 2.25". It has an ownership stamp of "Hattie Rosson." The album consists of thirteen leaves with spaces for 104 Cartes de visite or photographs of that size. It includes 65 Cartes de visite and tintypes. There are several images of children. Among the images included are:

2. Accompanied by a small ornate leather case with tintype photograph of an unidentified woman and velvet interior, 3.25" x 3.75" x .5".

We know of only one other PSA Graded 10 Signed Lincoln CDV. That example sold at Heritage for $75,000 in 9/2016, before it was later graded as a PSA 10. We feel our example is superior because that other example exhibits a pronounced gouge above Lincoln's head, several smaller abrasions, a pinhole and has no visible Gardner backstamp. Our example has superior provenance as described above and was recently discovered in an antique store in the Midwest. Of note, at the same Heritage auction another fine Lincoln signed CDV fetched $175,000. A unique opportunity to acquire the most coveted high spot of the 19th century and our most beloved President.