Lincoln Grants a Father's Request and Pardons His Son 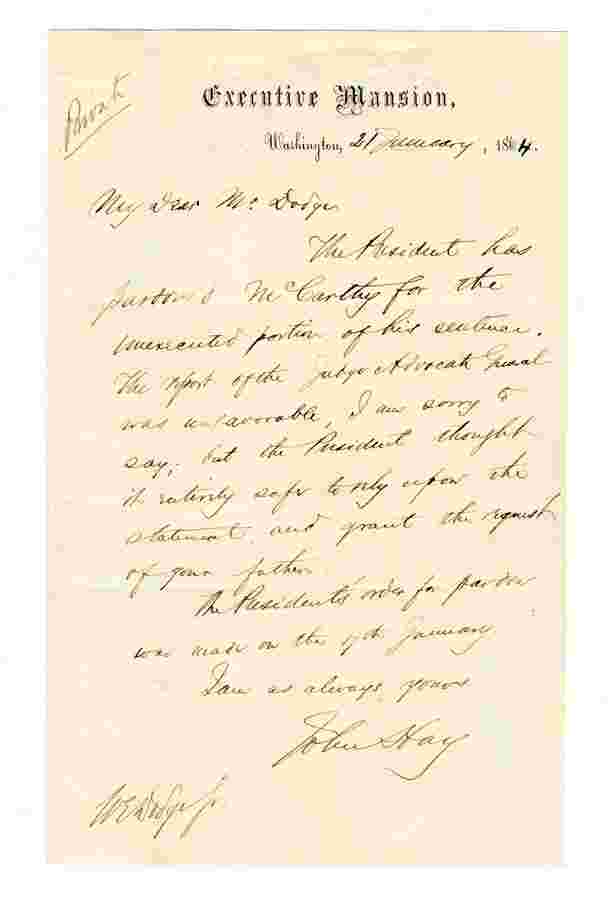 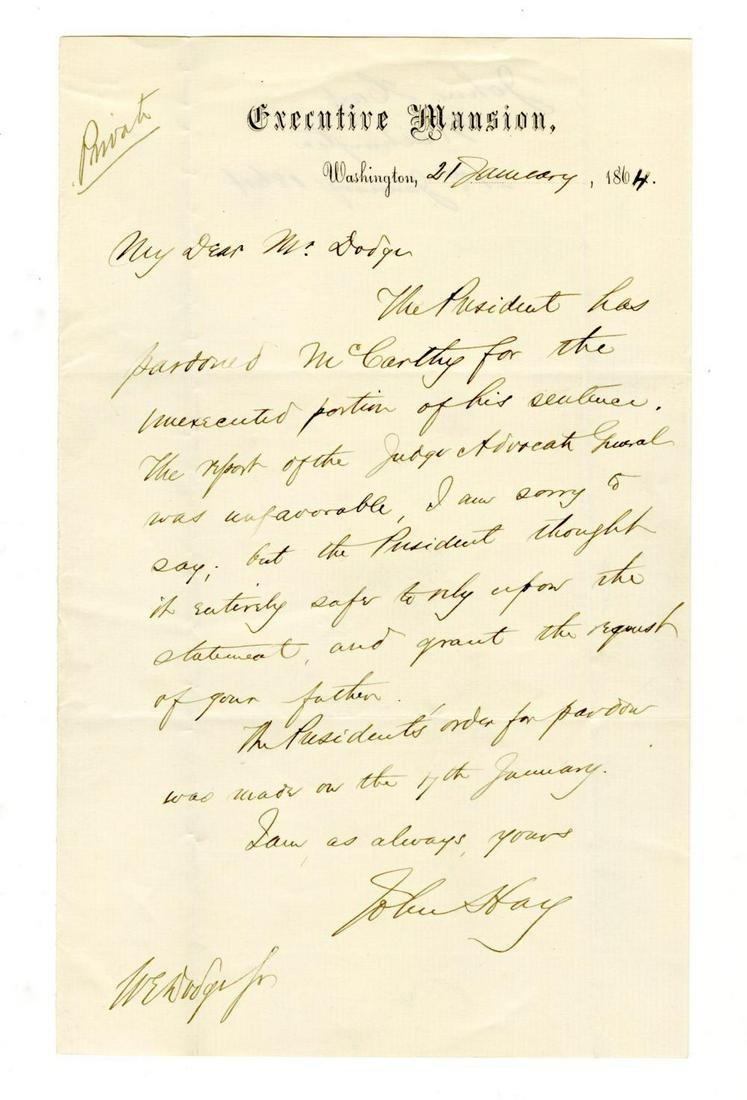 At the request of New York merchant William E. Dodge, Lincoln pardons a man named McCarthy for the remainder of his sentence, even though Judge Advocate General Joseph Holt did not recommend clemency.

Complete Transcript
Private
Executive Mansion,
Washington, 21 January, 1864.
My Dear Mr. Dodge
The President has pardoned McCarthy for the unexecuted portion of his sentence. The report of the Judge Advocate General was unfavorable, I am sorry to say; but the President thought it entirely safe to rely upon the statement, and grant the request of your father.
The President's order for Pardon was made on the 17th January.
I am, as always, yours
John Hay
W E Dodge Jr

John Milton Hay (1838-1905) was born in Indiana and moved to Illinois with his family. He graduated from Brown University in 1858 and read law in his uncle's office in Springfield, Illinois, adjacent to Abraham Lincoln's law office. After working for Lincoln's election to the presidency in 1860, Hay became one of Lincoln's private secretaries. After the war, Hay served in various diplomatic posts and on the staff of the New York Tribune. He also co-authored a multi-volume biography of Lincoln and co-edited a collection of Lincoln's letters with John G. Nicolay, another of Lincoln's private secretaries. In 1897, President William McKinley appointed Hay as U.S. Ambassador to the United Kingdom, a position he held for sixteen months before returning to become Secretary of State, a position he held under McKinley and Theodore Roosevelt until his death in July 1905. He helped negotiate the Open Door Policy with China and a treaty with the new Republic of Panama, which opened the way for building the Panama Canal.

William Earl Dodge Jr. (1832-1903) was born in New York City to William E. Dodge Sr. (1805-1883), a Congressman from New York, and his wife. In 1854, the younger Dodge married Sarah Tappan Hoadley (1832-1909), and they had six children. During the Civil War, he was active in the support of the Union cause and was a member of the Union League Club. The New York legislature passed a resolution honoring him for his work on a commission to supervise the conditions of New York troops in the field. In 1864, he became a partner in the import firm of Phelps Dodge, founded by his father and maternal grandfather. In the 1880s, Dodge and his cousin transformed Phelps Dodge into one of the world's largest and wealthiest mining corporations by buying copper mining companies in Arizona. He assumed control of Phelps Dodge after his father's death. Dodge served on the board of directors of several mining, railroad, real estate, water, and other companies. He also engaged in a number of philanthropic and cultural activities, from the Young Men's Christian Association to the Metropolitan Museum of Art.

Lincoln Grants a Father's Request and Pardons His Son