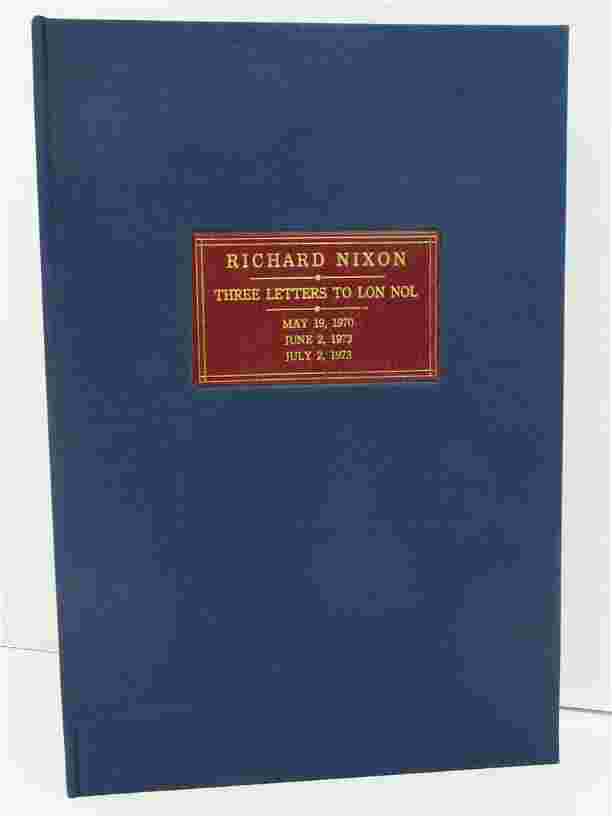 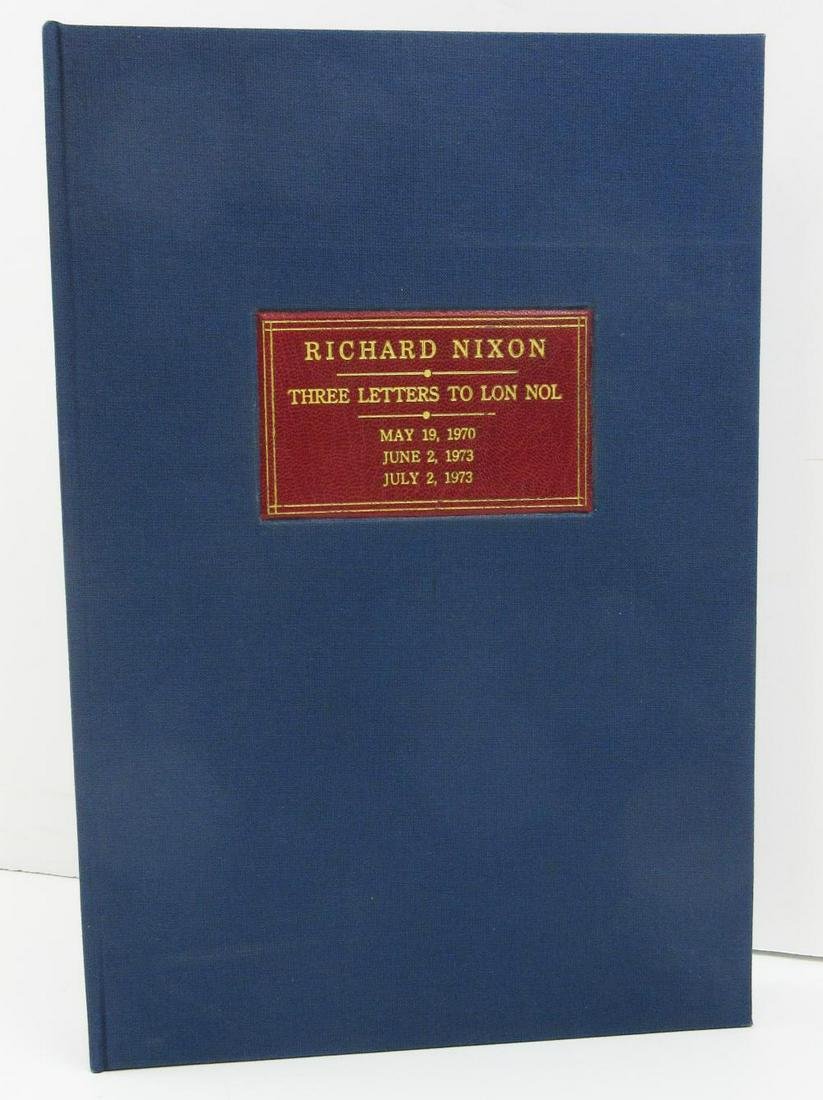 Nixon, Richard. Typed letter signed "Richard Nixon" to Lon Nol, May 19, 1970, one leaf (recto only) of The White House/ Washington letterhead, with original envelope addressed in

All three letters are neatly housed in a custom clamshell box


Richard Nixon's decision to bomb Cambodia, at first secretly, and then with ambivalent public support, marked a momentous page in history. This archive fleshes out an era of high-level diplomacy between the leaders of two countries, the United States and Cambodia, and their joint commitment to confront and defeat North Vietnamese aggression. According to several White House advisors, Nixon smiled when word was received on March 18, 1970, that Lon Nol had led a coup overthrowing the sympathetic communist regime in Cambodia. Demanding that the North Vietnamese leave his country, the fifty-seven-year-old pro-Western general (Vietnam-born, French-educated) closed the central port through which much of their war material flowed. Six months later, Nol abolished the old Cambodian monarchy and established the Khmer Republic, consolidating his control by adding the title of president (March 1972) to those of prime minister and defense minister.

Nixon went before the nation on April 30 to announce his decision to defend Cambodia against communist infiltration. From the earliest days of the war, Washington had wanted to deny Cambodian border areas to the enemy, especially the Cambodian communist guerrillas, the Khmer Rouge. Nol's ascent to power was therefore critical to the United States who, to assist its new ally, began sending military and economic aid. (Although the invasion did damage the communists' ability to conduct military operations and disrupted their military supplies, left unsaid was that American aide forced the communists further inland, where they began to pose a real threat to Nol's survival.)

As antiwar opposition exploded, with students pouring out of college dormitories to launch the most widespread series of campus protests in American history, personal communication between the two world leaders was vital.

The first letter in this archive was written by Nixon on May 19, complimenting, engaging, and reassuring his ally in controlled, almost pecking-order fashion: "In order that we may better appreciate the situation in Cambodia and that you may understand more fully my views I have asked Brigadier General Alexander Haig of my staff to meet with you and review our respective appraisals. General Haig is fully familiar with my views and with the kinds of steps which the United States is in a position to take to be of assistance to you. He has my full confidence. It is important that we keep in close contact in order that we might most effectively concert our actions in the days ahead...."

Haig went to the heart of the matter. (While Nixon took solace in the fact that more than a majority of those polled supported his Vietnam policies during the period of the Cambodian invasion, the Senate, in a dramatic challenge to wartime presidential authority, passed an amendment to cut off funds for the Cambodian operation after June 30.) After being briefed about the withdrawal of American ground forces from Cambodia. Nol, an emotional man with undeterred faith in the occult which often led to consultations with monks claiming to be spiritual channels to the ancient kings of Angkor, broke out into uncontrolled weeping and tremors.

Despite the pullout, the administration continued its B-52 bombing — a full-scale test of Nixon's doctrine to protect American interests by supporting foreign troops in the fight against communism. Cambodia had devolved from a country plagued by isolated skirmishes to a full blown free-fire zone. It was the beginning of the end. Even with American assistance, Nol's forces lost one engagement after another from the spring of 1970 to early 1973. When the Paris Peace Accords were signed in late January of 1973, the United States agreed to a cessation of hostilities, troop withdrawal, and prisoner exchange, while permitting Vietnamese forces on both sides to remain in place — tacit recognition of communist military strength. The peace was a mirage, however, as the Khmer Rouge immediately broke with Hanoi, continuing their struggle against the Nol government. Just days after the accords, Nixon re-instituted a massive bombing campaign in the feeble hope of sustaining Nol. (For the next eight months hundreds of thousands of bombs fell across Cambodia — more than the entire tonnage dropped on Japan during all of World War II.)

In May 1973, ever fearful that Nixon would take the country back into war, the House of Representatives began discussions to outlaw further bombings.

In the second letter of this archive, written on June 2 (three weeks before former White House Counsel John Dean told a special Senate committee that Nixon tried to cover up the Watergate affair) and marked "CONFIDENTIAL," the President, after inquiring into Nol's health (since suffering a stroke in 1971) and possible medical treatment in New York City, emphasized that he had been "follow[ing] with great care developments in the Khmer Republic over the past months. I commend you on the wisdom of your decisions to broaden your government and to allow a group of able men to assist you in guiding the destiny of your people. In this, you have again displayed the selflessness and sense of duty which marks you as the Republic's foremost patriot I am fully confident that the new foundation you have established will bring about further improvement in administrative and military performance.... Het me again express my respect for your leadership in the past, most difficult months and my deep hope that a lasting peace can soon be attained in your country...."

Though polite and defferential, Nixon clearly realized the futility of an American-sustained, foreign war. From the Western White House, San Clemente, on July 2, the President entreated Nol to look beyond American shores; the third letter in this archive reads, in part: "...You can besure that the United States will continue to give the fullest support to the Khmer Republic concerning its standing at the United Nations when the General Assembly reconvenes in September. It is good to know, however, that you will energetically pursue your own efforts to present your case to other countries. I believe your case will be immeasurably strengthened if you can also report a record of bold and dynamic leadership by the High Political Council and substantial progress in resolving the internal military and administrative problems which still confront the Republic. I am confident that such actions if vigorously pursued... will underscore the legitimacy of your administration and the false claims of your enemies. You and your colleagues on the Council have my continuing respect for your fortitude in this difficult period and my deep hope that peace soon can be restored to your country...."

On July 16, the Senate Armed Services Committee initiated hearings on the secret bombing of Cambodia. In August Nixon finally halted the B-52 campaign — the last direct military intervention in Southeast Asia by the United States. Nol's troops quickly fell apart. Crippled by nervous breakdowns and a series of minor strokes. Nol fled for Hawaii with his family and entourage in April 1975 (just before Gerald Ford was forced to order an emergency evacuation of remaining American forces from Saigon), leaving his country to the Khmer Rouge who immediately instituted one of the most brutal revolutionary systems in history.

As if a premonition of events to unfold, Nixon's first letter, forceful and optimistic, gave way to a second restrained, less committed letter, followed by a third letter, detached and resigned. The uniqueness of this unpublished archive and its unparalleled significance on the world's diplomatic stage leave little doubt that Nixon and Nol could not escape history's final judgment. For the new Cambodia, it was Day Zero — Nixon's in-the-name-of-peace-and-honor debacle, Nol's misconceived life's work, and two thousand years of Khmer history were meaninglessly reduced to a barbarous plan for a utopian communist society.