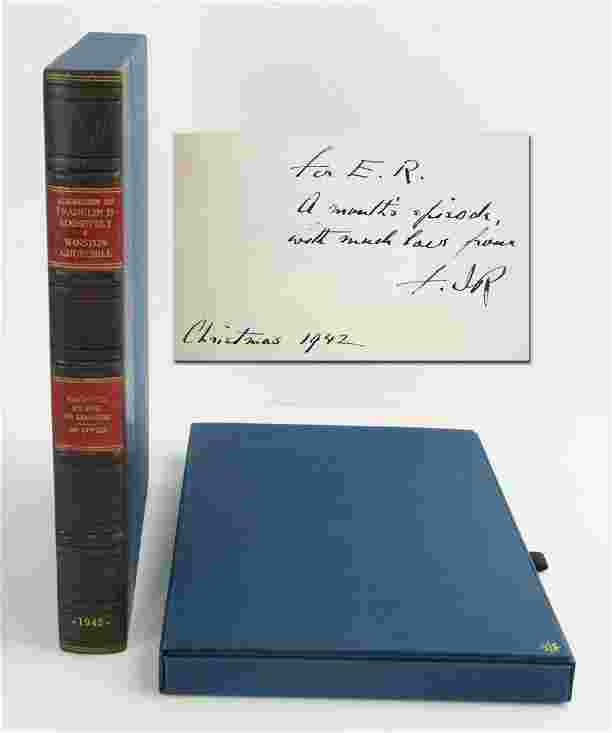 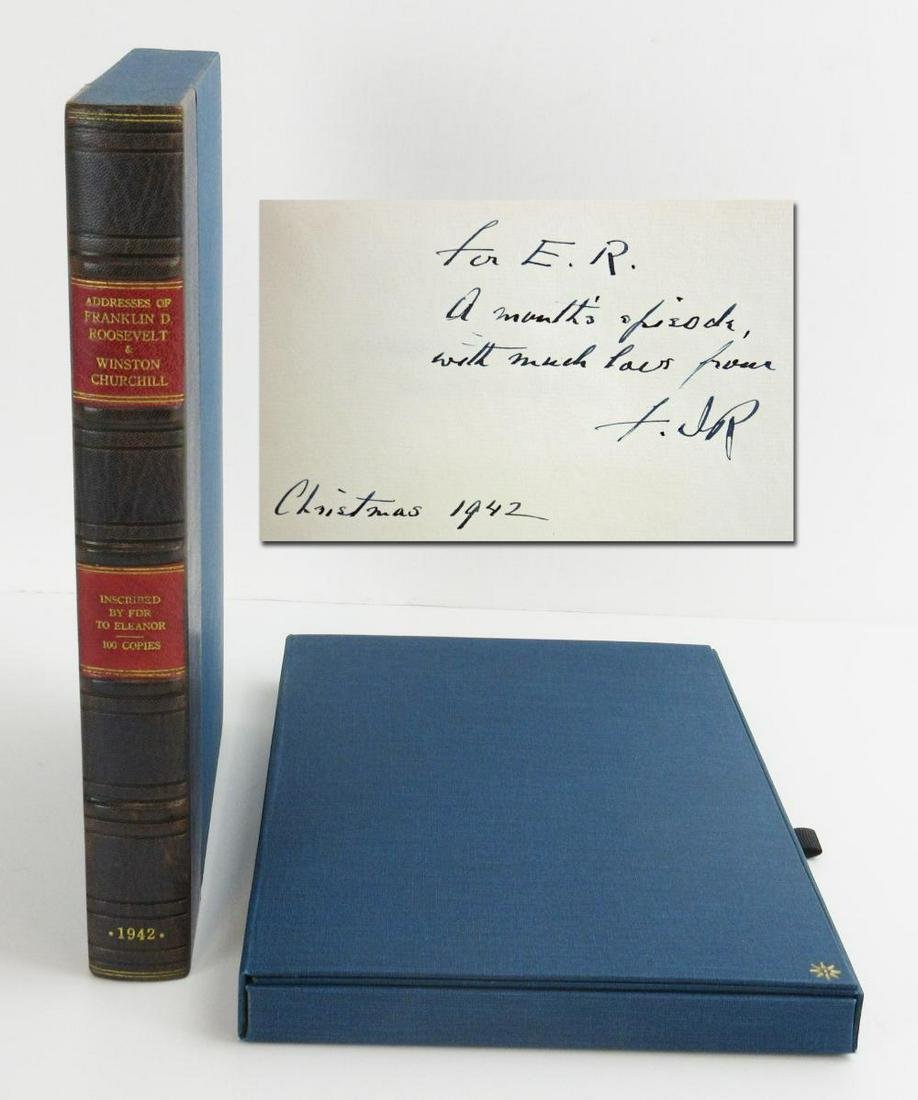 Roosevelt Franklin
FDR Signed Declaration of War "Date of Infamy" Inscribed to Eleanor, a Monumental Roosevelt Item Which Includes Other Important Addresses of FDR & Churchill & a Huge Tipped In Facsimile of the Declaration of War, Best FDR Book Money Can Buy.

First edition of the first wartime White House Christmas book (though the 1941 book was
distributed after the attack on Pearl Harbor, it was planned and printed much earlier in the year);
100 copies numbered by RooseveltÂ—this is copy #2; FDR inscribed copy #1 to Churchill.
Addresses of Franklin D. Roosevelt and Winston Churchill prints seven major war addresses,
including FDR's December 8, 1941 "date of infamy" speech requesting a declaration of war
against Japan; his January 6, 1942 State of the Union message; and Churchill's December 26,
1941 address to the United States Congress. A fold-out opposite page 42 prints a facsimile of the
"Declaration by United Nations" pledging cooperation in combating the members of the
Tripartite Pact.

A foundational presentation copy, bearing one of only three recorded inscriptions from FDR to
his wife, Eleanor Roosevelt: "For E.R. A month's episode, with much love from FDR Christmas
1942." With Eleanor's elaborate bookplate on the front pastedown, along with the discreet round
label, less than one square inch, printed and affixed by Hammer Galleries: "Estate of Eleanor Roosevelt No.____ , Hyde Park, N.Y." is printed, with "A41" added in autograph. Hammer dispersed many books from the Roosevelt library in two sales: the first in 1946, and the second, in 1951.

Both FDR and Churchill masterfully crafted their words to turn the darkest days of the Second
World War into their "finest hour." FDR declared America "the arsenal of democracy" and his
classic statement of the Four Freedoms became the "very antithesis of the so-called new order of
tyranny which the dictators seek to create with the crash of a bomb." After the leaders' first
meeting at Placentia Bay, Newfoundland, they drafted the Atlantic Charter, which espoused a
declaration of imperturbable principles for peaceful postwar relations. According to Churchill's
calculation, he and FDR had one hundred twenty days of close personal contact. FDR was
irritated by de Gaulle and mystified by Stalin, but when the American and British Joint Chiefs of
Staff could not agree, Churchill and he "could get together and settle things." In the throes of one
of the endless crises they jointly confronted, FDR once telegraphed Churchill: "It is fun to be in
the same decade with you."