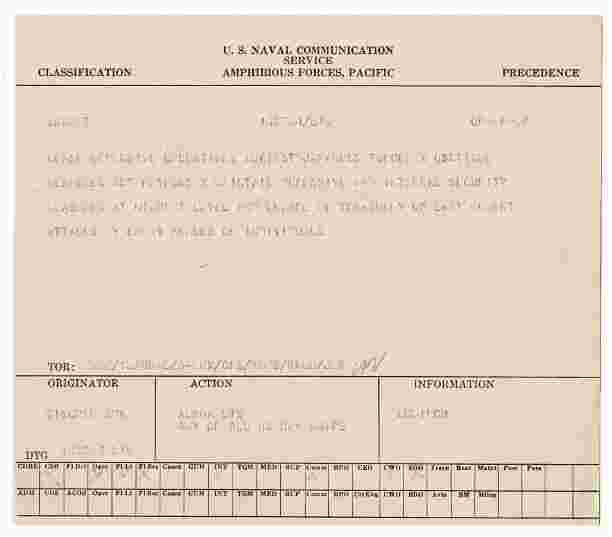 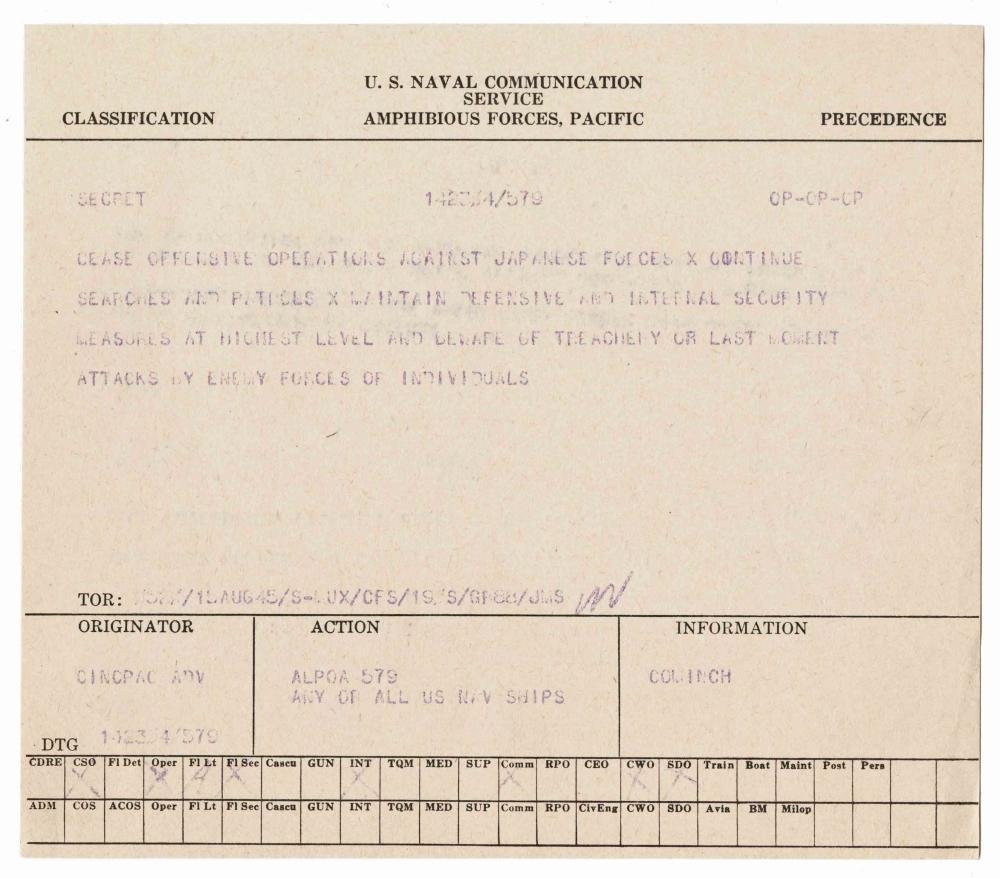 A fantastic example of an important WWII Naval Dispatch from the height of the war against Japan on the day Japan announced their surrender. This fascinating communique announces the important directive message to the Amphibious Forces, and shows that we were preparing for treachery in the event the surrender was merely a ploy.

In advance of this moment, the invasion of Japan had promised to be the bloodiest seaborne attack of all time, conceivably 10 times as costly as the Normandy invasion in terms of Allied casualties. On July 16, a new option became available when the United States secretly detonated the world's first atomic bomb in the New Mexico desert. Ten days later, the Allies issued the Potsdam Declaration, demanding the "unconditional surrender of all the Japanese armed forces." Failure to comply would mean "the inevitable and complete destruction of the Japanese armed forces and just as inevitable the utter devastation of the Japanese homeland." On July 28, Japanese Prime Minister Kantaro Suzuki responded by telling the press that his government was "paying no attention" to the Allied ultimatum. U.S. President Harry Truman ordered the devastation to proceed, and on August 6, the U.S. B-29 bomber Enola Gay dropped an atomic bomb on the Japanese city of Hiroshima, killing an estimated 80,000 people and fatally wounding thousands more.

After the Hiroshima attack, a faction of Japan's supreme war council favored acceptance of the Potsdam Declaration, but the majority resisted unconditional surrender. On August 8, Japan's desperate situation took another turn for the worse when the USSR declared war against Japan. The next day, Soviet forces attacked in Manchuria, rapidly overwhelming Japanese positions there, and a second U.S. atomic bomb was dropped on the Japanese coastal city of Nagasaki.

Just before midnight on August 9, Japanese Emperor Hirohito convened the supreme war council. After a long, emotional debate, he backed a proposal by Prime Minister Suzuki in which Japan would accept the Potsdam Declaration "with the understanding that said Declaration does not compromise any demand that prejudices the prerogatives of His Majesty as the sovereign ruler." The council obeyed Hirohito's acceptance of peace, and on August 10 the message was relayed to the United States.

Early on August 12, the United States answered that "the authority of the emperor and the Japanese government to rule the state shall be subject to the Supreme Commander of the Allied Powers." After two days of debate about what this statement implied, Emperor Hirohito brushed the nuances in the text aside and declared that peace was preferable to destruction. He ordered the Japanese government to prepare a text accepting surrender.

In the early hours of August 15, a military coup was attempted by a faction led by Major Kenji Hatanaka. The rebels seized control of the imperial palace and burned Prime Minister Suzuki's residence, but shortly after dawn the coup was crushed. At noon that day, Emperor Hirohito went on national radio for the first time to announce the Japanese surrender. In his unfamiliar court language, he told his subjects, "we have resolved to pave the way for a grand peace for all the generations to come by enduring the unendurable and suffering what is insufferable." The United States immediately accepted Japan's surrender.


J. John Fox (1905-1999) was born in Paterson, NJ, but grew up in and worked most of his adult life in Boston, MA. He attended Boston University, then enrolled in Boston University Law School. It was there he acquired the nickname "Just John" Fox, his reply to a professor's question about his name.

When Pearl Harbor was attacked, Fox enlisted in the Navy, despite being around 36 years old. Initially he served in the North Atlantic before being assigned to the amphibious forces in the Pacific Theater under Admiral Richmond "Kelly" Turner. Fox became an intelligence officer and was involved in the planning of the assaults on Kwajelein, the Marianas, Palau, Leyte, Iwo Jima and Okinawa. In late 1945 he was also deeply involved in planning the invasion of Japan itself. Had the invasion occurred, he was to have been in charge of prisoner interrogation and captured documents. He was awarded the bronze star for his service in the Pacific Theater. Before being discharged in 1946, he helped in preparation of amphibious operations training materials at the Naval War College in Newport, RI.

After his discharge, he returned to his legal practice in Boston. Governor Dever appointed him as an associate judge in 1952. He then became a probate judge in Norfolk Probate Court in 1960. He retired from the bench in 1973.

In the 1960s Fox helped establish a public medical school in Massachusetts, a school that became the University of Massachusetts Medical School. In 1974, he co-sponsored, with David Bartley, the Bartley-Fox Law, the first of its kind, in Massachusetts. Bartley-Fox established stiff penalties for illegal possession of a firearm and committing a crime with an unlicensed firearm. Although the law generated controversy, as does all firearms-related legislation, this one did not restrict ownership of firearms, it only required them to be registered.

Judge Fox lived for another quarter century after retirement, passing away on October 4, 1999 at the age of 96. This piece was brought back from the Pacific by Fox following World War II, and descended in his family.