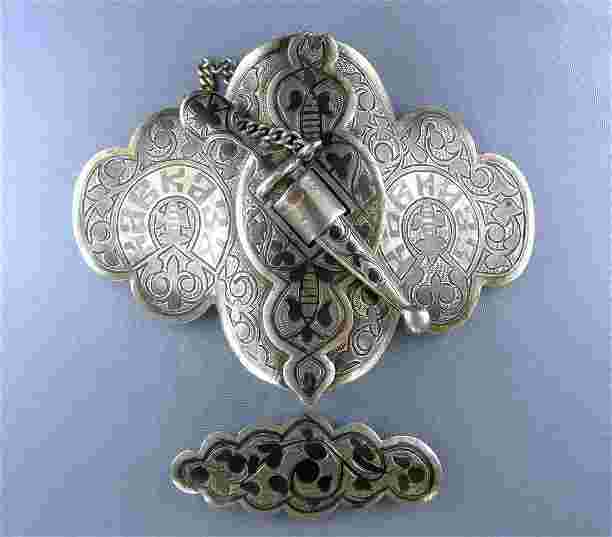 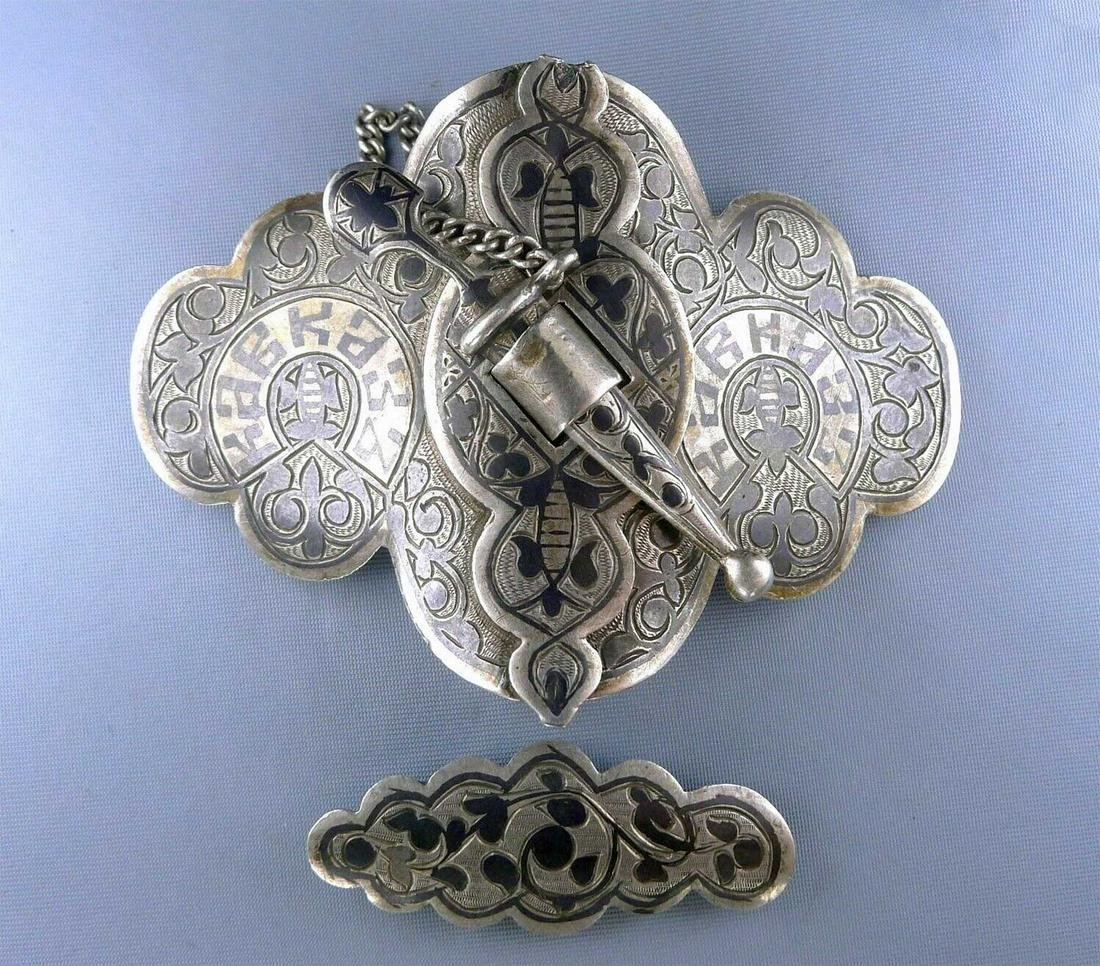 RUSSIAN CAUCASIAN NIELLO SILVER BELT BUCKLE, MARKED
It has a stamp - please see the image.
SIZE: Length : 2 7/8 " ( 7.3 cm ). Width : 2 1/8 " (5.3 cm ). Weight: 28 grams.
ESTIMATE PRICE: $250 - $300.
Few years ago the same item was sold for $425 - please see the screenshot.
PAY in PARTS: You can pay for any item during 2 - 3 months. Just make a deposit 10% and the item will wait for you.
SHIPPING: Let us Handle Your Shipping. For your convenience we will ship your item for a reasonable price - shipping costs will be included in the invoice. Combined shipping is available - next item will be ONE DOLLAR for shipping.
Our shipping days for this auction are: January 28, February 4, February 18, 2020.
NEW: Returning customers will have FREE SHIPPING in USA and 50% DISCOUNT on international shipping.

WIKIPEDIA: Niello is a black mixture, usually of sulphur, copper, silver, and lead, used as an inlay on engraved or etched metal, especially silver. It is added as a powder or paste, then fired until it melts or at least softens, and flows or is pushed into the engraved lines in the metal. It hardens and blackens when cool, and the niello on the flat surface is polished off to show the filled lines in black, contrasting with the polished metal (usually silver) around it. It may also be used with other metalworking techniques to cover larger areas, as seen in the sky in the diptych illustrated here. The metal where niello is to be placed is often roughened to provide a key. In many cases, especially in objects that have been buried underground, where the niello is now lost, the roughened surface indicates that it was once there. Niello was used on a variety of objects including sword hilts, chalices, plates, horns, adornment for horses, jewellery such as bracelets, rings, pendants, and small fittings such as strap-ends, purse-bars, buttons, belt buckles and the like. It was also used to fill in the letters in inscriptions engraved on metal. Periods when engraving filled in with niello has been used to make full images with figures have been relatively few, but include some significant achievements. In ornament, it came to have competition from enamel, with far wider colour possibilities, which eventually displaced it in most of Europe. The name derives from the Latin nigellum for the substance, or nigello or neelo, the medieval Latin for black. Though historically most common in Europe, it is also known from many parts of Asia and the Near East.

WIKIPEDIA: The history of the Caucasus region may be divided into the history of the Northern Caucasus (Ciscaucasia), historically in the sphere of influence of Scythia and of Southern Russia (Eastern Europe), and that of the Southern Caucasus (Transcaucasia; Caucasian Albania, Georgia, Armenia, Azerbaijan) in the sphere of influence of Persia, Anatolia and for a very brief time Assyria. Up to including the early 19th century, the Southern Caucasus and a part of the Northern Caucasus (Dagestan) all formed part of the Persian Empire. In 1813 and 1828 by the Treaty of Gulistan and the Treaty of Turkmenchay respectively, the Persians were forced to irrevocably cede the Southern Caucasus and Dagestan to Imperial Russia. Russia conquered and annexed the rest of the Northern Caucasus in the course of the 19th century in the Caucasian Wars (1817-1864). The Northern Caucasus became the scene of intense fighting during the Second World War. Nazi Germany attempted to capture the Caucasus region from Soviet control in 1942 by a two-pronged attack towards both the western bank of the Volga (intending to seize the city of Stalingrad) and by a drive southeast towards Baku, a major center of oil production. The Nazis intended to establish a Reichskommissariat Kaukasus to control the Caucasian territories of the Soviet Union. Considerable parts of the northern Caucasus fell under German occupation, but the invasion eventually faltered as it failed to accomplish either goal, and Soviet soldiers drove the Germans back west following the Battle of Stalingrad (1942-1943). Following the dissolution of the Soviet Union in 1991, Armenia, Azerbaijan, and Georgia became independent nations. The Caucasus region has become the setting for various territorial disputes since the collapse of the Soviet Union, leading to the Nagorno-Karabakh War, the Ossetian-Ingush conflict, the War in Abkhazia, the First and Second Chechen Wars, and the South Ossetia War.