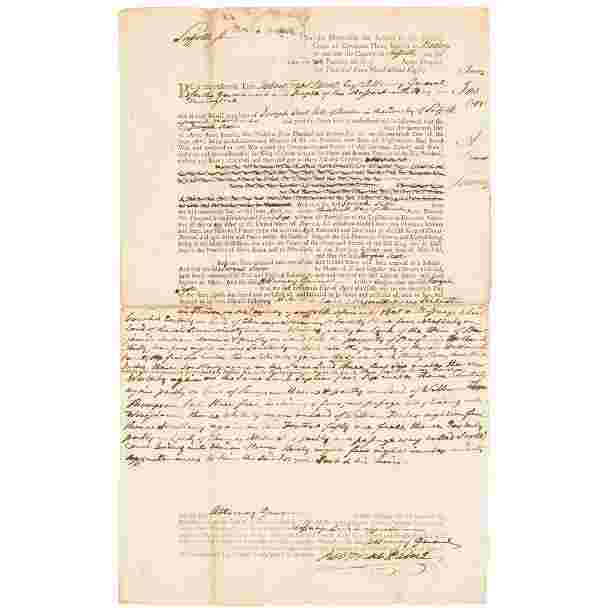 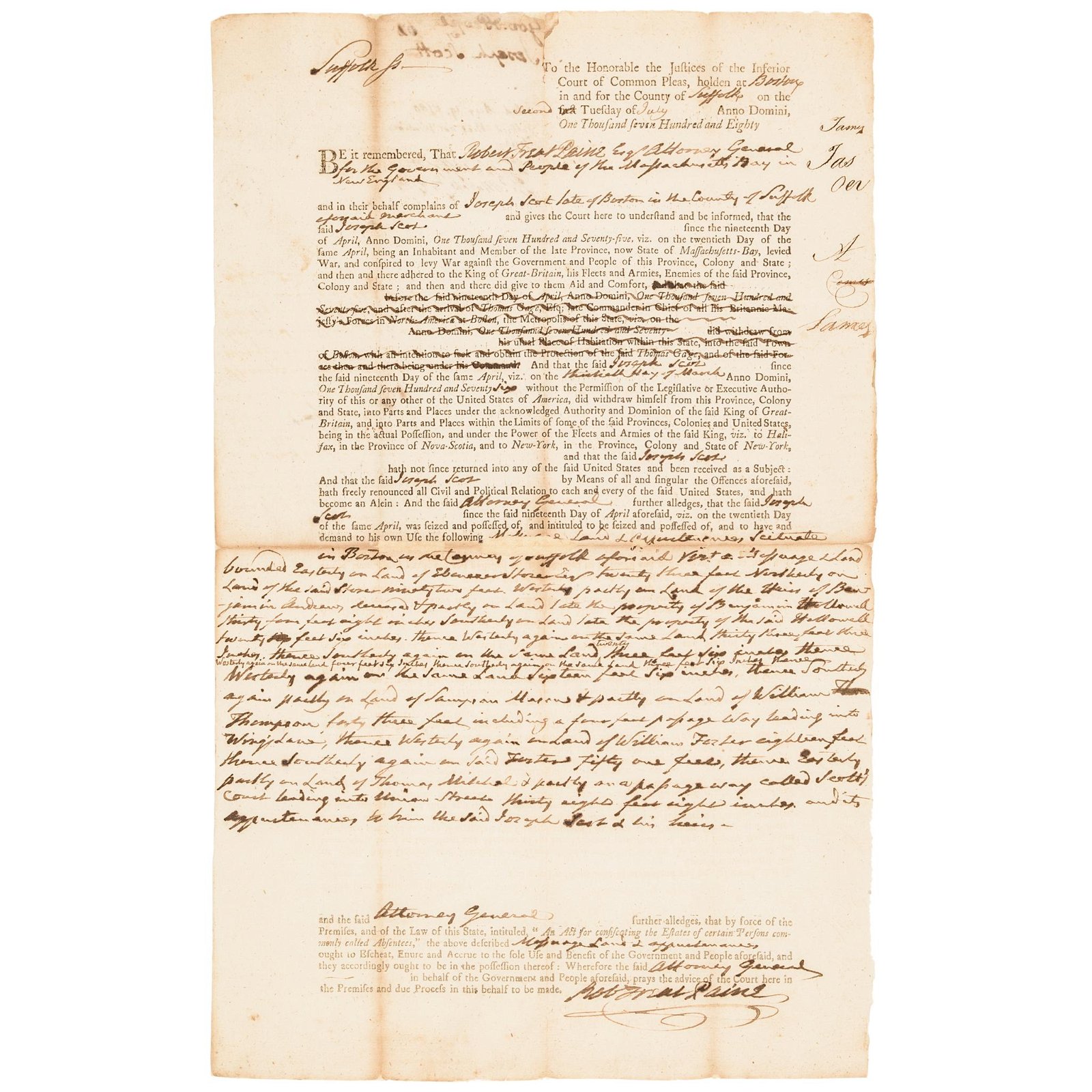 Autographs
Declaration of Independence Signer Robert Treat Paine Confiscates Absentee British "Tory" Lands and Property
ROBERT TREAT PAINE (1731-1814). Signer of the Declaration of Independence from Massachusetts, a Delegate in the Continental Congress 1774-1778 and American Revolutionary War Patriot and Lawyer.
July, 1780-Dated Revolutionary War, Partially-Printed Document Signed, "Robt Treat Paine" in a large 3.5" signature and having his flourish below in bold ink, 1 page, with verso docketing, measuring 17.5" x 10.75", Boston, Mass, Very Fine. This important large size legal judgment document is rendered by Robert Treat Paine in his capacity as Attorney-General, for the new Commonwealth of Massachusetts under, "An Act for confiscating the Estates of certain Persons commonly called Absentees." The subject, one Joseph Scot, "an Inhabitant and Member of the late Province, now State of Massachusetts-Bay," was accused by Paine of conspiring "to levy War against the Government and People of this Province, Colony and State" and who "without the Permission of the Legislative or Executive Authority of this or any other of the United States of America, did withdraw himself from this Province, Colony and State, into Parts and Places under the acknowledged Authority and Dominion of the said King of Great Britain."

Signed within the text and at the very conclusion by Paine. Overall, in very nice solid condition, with light tone along the folds and having small repairs made to the chips along the centerfold and to minor areas of paper loss. Note - More excerpts of the text are provided in our online version. This impressive, historic signed document by Robert Treat Paine would be well-suited to framing and display. Rare!


Additional Excerpts of the Text:

"Be it remembered, That Robert Treat Paine Esqr. Attorney General for the Commonwealth of Massachusetts and in their behalf complains of Charles Ward Apthorp of New York, in the County and State of New York Esq and gives the Court here to understand and be informed, that the said Charles Ward Apthorp... conspired to levy War against the Government and People of this Province, Colony and State and of the Province Colony and State of New York and of the United States of America as aforesaid and then and there adhered to the King of Great Britain, his Fleets and Armies, Enemies of the said Provinces, Colonies and States and against the United States of America; and then and there did give them Aid and Comfort...."

"by force of the Premises, and of the Law of this State, intituled, 'An Act for confiscating the Estates of certain Persons commonly called Absentees,' the above described Messuages Lands and Appurtenances ought to Escheat, Enure and Accrue to the sole Use and Benefit of the Commonwealth aforesaid, and they accordingly ought to be in the possession thereof: Wherefore the said Attorney General in behalf of the Commonwealth aforesaid, prays the advice of the Court here in the Premises and due Process in this behalf to be made."

Robert Treat Paine (1731-1814) was born in Boston and attended the Boston Latin School. At the age of 14, he entered Harvard College, from which he graduated in 1749. He then taught at the Boston Latin School. He began the study of law in 1755 and was admitted to the bar in 1757. He served in the Massachusetts General Court from 1773 to 1774, in the Provincial Congress from 1774 to 1775, and represented Massachusetts at the Continental Congress from 1774 to 1776.

There, Paine signed both the Olive Branch petition and the Declaration of Independence. He served as the first attorney general of the State of Massachusetts from 1777 to 1790 and as associate justice of the state supreme court from 1790 to 1804.

Robert Treat Paine (1731-1814), was an American Revolutionary War Patriot, Signed of the Declaration of Independence from Massachusetts and Jurist.

Paine graduated from Harvard in 1749 and studied for the ministry, serving as a chaplain during the French and Indian War. He later abandoned the ministry for the study of Law and was admitted to the Mass. Bar in 1759. He conducted the prosecution of Captain Thomas Preston and his men after the Boston Massacre.

He served as a Delegate in the Continental Congress, 1774-1778. In November 1775 he was appointed by Congress along with Robert R. Livingston and John Langdon to lead a commission to Canada to win over that country to the Colonial cause. He was Speaker of the Massachusetts House of Representatives, its Attorney-General 1780-1790, and a Justice of the Supreme Court 1790-1804.