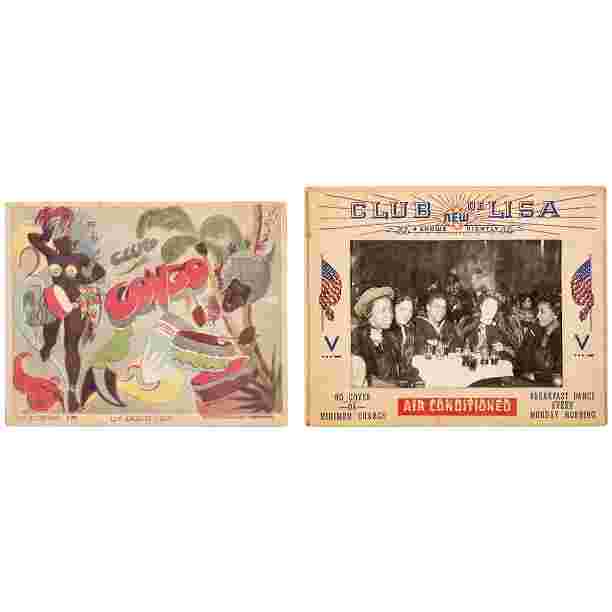 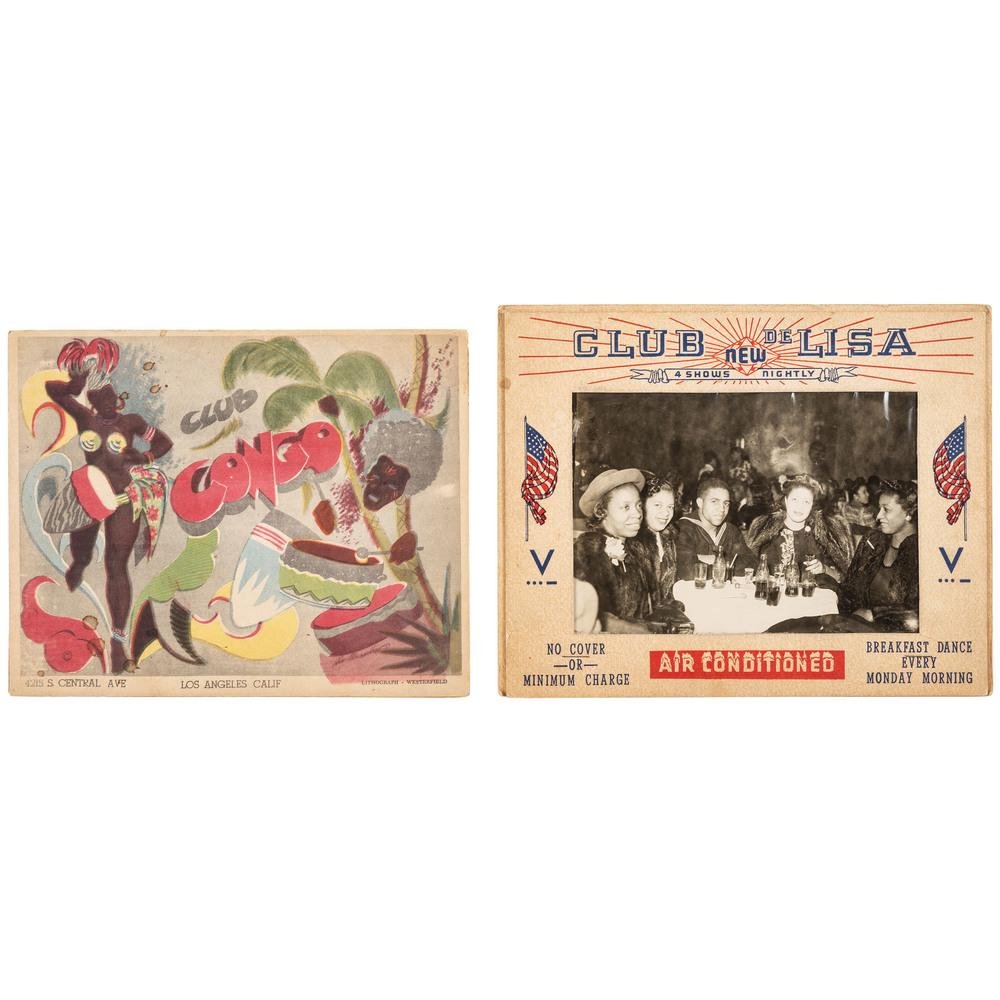 Lot of 9 souvenir photographs with folders from African American jazz and entertainment clubs in Los Angeles, San Diego, and Oakland, California and one from Chicago, Illinois, ca 1941-1951. Six of the clubs were located on Central Avenue in Los Angeles, often called the "Brown Broadway." Notably, this collection includes a folder from the legendary Club Alabam, owned and operated by bandleader Curtis Mosby. It hosted the cream of Los Angeles society in the late 1930s and 40s and was the epicenter of west coast jazz.

Other locations included the Elks Ballroom, said to be the largest African-American owned building in Los Angeles which regularly featured jazz greats like Duke Ellington and Cab Calloway; the Downbeat, recalled by clarinetist Buddy Collette as "the hot spot on the Avenue" and reported to be a regular hangout of gangster Mickey Cohen; the Last Word; and Club Congo, which was at 4215 S. Central Avenue, the former location of Club Alabam. Mosby had lost control of the Alabam in early 1947, changing owners and its name to Club Congo in 1947.

Also included are Billy Berg's of Hollywood, the location of Dizzy Gillespie and Charlie Parker's west coast debut on December 10, 1945; "Slim" Jenkins' Rose Room, a supper club in Oakland's blues district; and the Creole Palace in San Diego, a popular cabaret known as the "Cotton Club of the West" which featured prominent artists including Count Basie and Billie Holiday.

Several photographs feature servicemen, including the image of Warren L. Walton of the US Navy and James Dickens of the US Coast Guard pictured on New Years 1951 at the Creole Palace. The two are pictured smiling at a table with beers with handwritten captions, "'Square' Country Boy" and "'Hep Cat' City Slick" alongside an inscribed recollection of their evening out before returning to base.

Also includes one souvenir card from the New Club DeLisa in Chicago, Illinois. Festooned with patriotic imagery, the card advertises their "Breakfast Dance Every Morning" and "4 Shows Nightly." The black and tan club was owned and operated by the DeLisa brothers and was known as the Chicago Cotton Club, often billed as "Harlem in Chicago." Founded in 1933, the "New" Club DeLisa reopened at a new location in 1941.

Various conditions with expected wear. Some with handwritten captions.