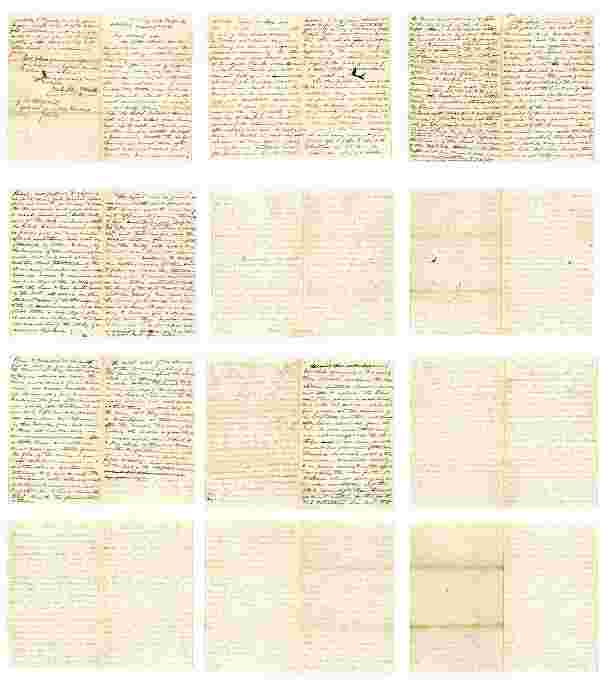 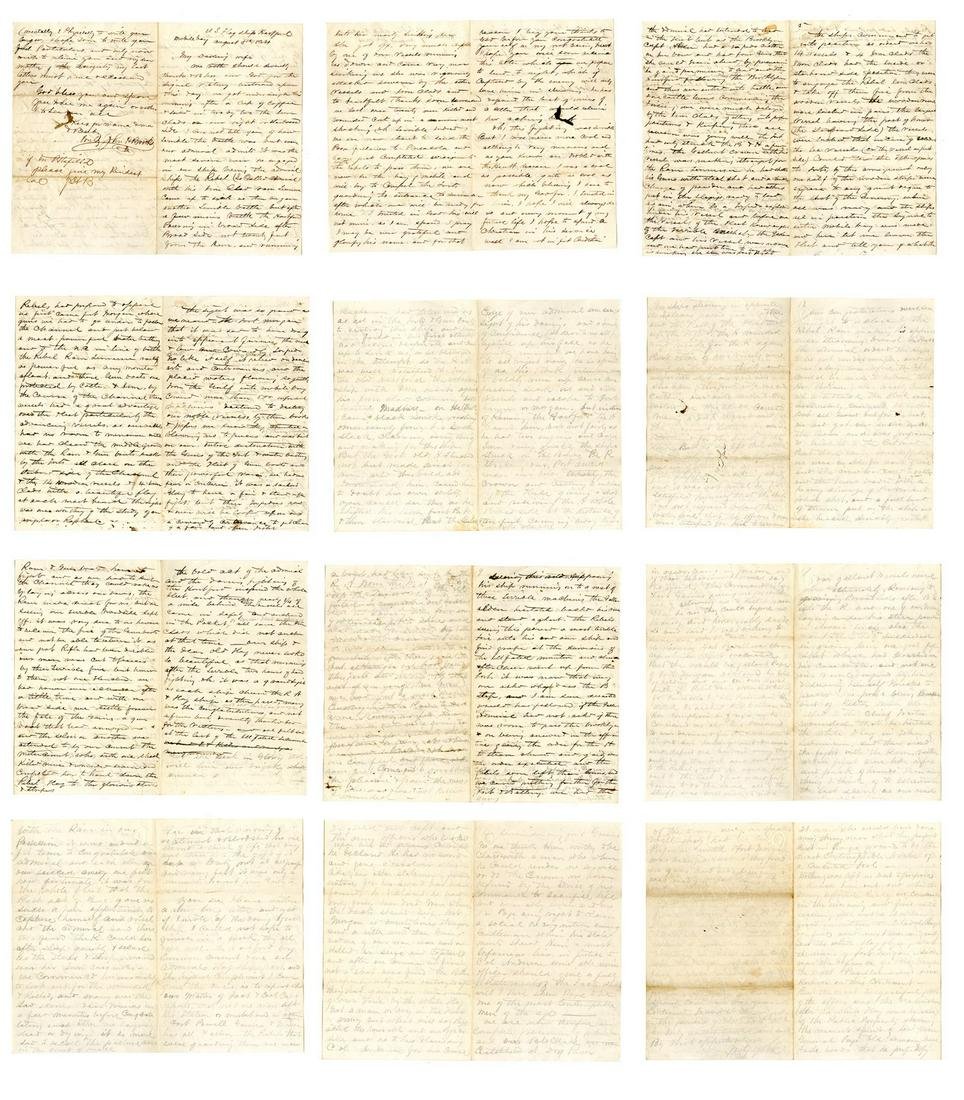 Twenty-four page ALS scripted as six bi-fold pages, each extensively written on the four sides of the sheet. Eleven pages scripted in ink, with the balance of the thirteen pages scripted in graphite. Each page 5" x 8". Expected folds, occasional small stains. Strongly contrasting ink and with defined graphite to all twenty-four pages but the last page, which is faded. Signed THREE times and dated by John H. Brooks, Farragut's Steward while aboard the U.S.S. Hartford, "August 5th, 1864". Signed in full at the bottom of page four as "John H. Brooks', and then with initials after his postscript of "J.H.B." and signed a third time with his initials on the final page as "J.H.B.".Overall a quite lengthy letter in near fine condition. Accompanied by a full transcript of the entire letter neatly handwritten.

The evening before the fateful battle brought horrific weather. Heavy rainstorms had passed at sundown, and Admiral Farragut fretted about delaying the attack. Unable to sleep, Farragut sent his steward, John H. Brookes topside at 3am to investigate the skies and check the wind. Brooks who authored this letter reported the storm had passed and a light breeze from the southwest rippled the waters. Farragut was invigorated, noting the direction of the wind would blow the smoke of battle back into the eyes of Fort Morgan's gunners. Full of fight he turned to his steward John Brooks, and said "We will go in, this morning". With a sighted comet arcing overhead as an omen of victory, the sailors prepared for battle, one whose destiny which was to go down in history …

It is from this point that John Brooks, in a letter to his wife, begins his accounting of the Battle of Mobile Bay, while aboard the U.S.S. Hartford:

…. we are now in the Bay Of Mobile and will try to compel the forts guarding its entrance to surrender after which we will be ready for home ...

… As ordered we had 14 vessels and 4 Iron Clads. The Iron Clads had the inside or starboard side position, they were to engage the Rebel Ironclads"

" The Gulf into Mobile Bay covered more than 500 infernal machines destined to destroy our noble vessels, by their books and papers we know they counted on blowing us to pieces … but their torpedos was and ever will be looked upon as a cowardly contrivance to get clear of a fair and open fight and the Admiral had intended to lead in the fleet but as the Brooklyn Capt Alden had a torpedo cutter on her blow and had four funs that she could train ahead by persuasion he gained permission to lead ..."

Farragut ordered his captains to stay to the "eastward of the easternmost buoy" because it was "understood that there are torpedoes and other obstructions between the buoys." Although Farragut was a champion of the "wooden navy," he agreed to include four new ironclad ships modeled after the USS Monitor in his attack fleet. It was widely believed that these warships were unsinkable.

Suddenly at 7:40am, an army signalman named John Kinney was aboard the flagship, relaying messages to and from the admiral. Kinney climbed the rigging almost 100 feet above the deck to get a view above the smoke of battle. At that moment, against orders, the Tecumseh steered westward into the minefield, in an effort to keep the approaching rebel ram Tennessee in its sights. Kinney relayed what happened next. “Just at this moment, to the horror of us all, the monitor Tecumseh, a few hundred yards in the advance, seemed to stagger for a moment, then suddenly careened, and almost instantly disappeared beneath the water, carrying with her, her noble commander, Captain Craven, and one hundred and twenty officers and men, hopelessly imprisoned in their iron coffin.” The Tecumseh had struck a torpedo, the muffled explosion hardly audible above the din of battle, and she sank in less than a minute, bow first, her propeller still turning.

The attack was quickly unraveling, which Farragut saw firsthand after climbing the rigging himself. Fearing for the admiral’s safety, his captain sent a quartermaster aloft with a rope, and Farragut permitted himself to be tied fast to the rigging, freeing both hands to use his spyglass and signal his officers. The Tecumseh had vanished, and Farragut realized the Brooklyn, like an obstinate mule, simply was not going to proceed. Meanwhile, his fleet was taking merciless fire from the fort, as well as from the Tennessee and three confederate gunboats in the bay.

"Everyone asked why does the B (Brooklyn) stop, and I am sure disaster would have followed if the Gallant Admiral had not asked if there was room to pass the Brooklyn."

Now almost abreast of the Brooklyn, whose captain shouted a warning of torpedoes ahead, came instead the reply of Farragut - whose very determined response was specifically detailed in Brooks letter:

" (Farragut) gave the order for the H to steam ahead and gaily was the order executed …. "

It was no doubt at this moment Farragut's zealous determination noted above by his Steward Brooks, echoed out his infamous order of “Damn the torpedoes!” Then to his helmsman added, ”Four bells, Captain Drayton, go ahead.” And against all odds, the seasoned admiral ordered his flagship, the Hartford, and his fleet to press forward through the underwater minefield and into Mobile Bay. It was barely 7:50am. What we know is that by 10am after almost an additional 3 more hours of raging combat, the Tennessee surrendered. However much of these 3 hours of battle is further detailed in John Brooks letter to his wife:

"The Metacomet who with one shot killed nine and wounded seven and compelled her to haul down the rebel flast to the glorious Stars And Stripes, the bold act of the admiral and the daring fighting of the Harford inspired the whole fleet … The Dear Old Flag never looed so beautiful as that morning after the terrible two hours of hard fighting. Oh it was a grand sight …

Brooks was describing the events shortly before 10am when Buchanan continued for the Hartford ,and the ironclad Manhattan approached, rotating her turret for a 440-pound solid shot from her 15-inch gun. The shot exploded against the Tennessee, penetrating 5 inches of iron plates and 24 inches of solid wood, daylight reaching the crew below. By this time, the Hartford had charged the Tennessee as well, the two vessels scraping side by side and exchanging broadsides from 12 feet away. Other Union vessels got into the action, and the Tennessee was taking fire from all quarters. The end was imminently near.

Commander Johnston of Tennessee, reported later on his decision, “with an almost bursting heart, to hoist the white flag, and … placed it in the same spot where but a few moments before had floated the proud flag for whose honor I would so cheerfully have sacrificed my own life.”

John Brooks incredibly detailed accounting of this famous battle additionally waxes on the aftermath of the battle "We commenced immediately to look out for the wounded and killed … in the quiet of peace than in that morning of excitement and bloodshed, no one seemed to think of life that day and then get the gift of it but a duty not all painful and many felt it was only a moments transit from Earth To Heaven …. "

A stunning, revealing ALS. The reader is mesmerized and literally drawn into the battle, watching and feeling it unfold in front of their eyes. Yet all the while knowing all too well how the story ends. But for just one moment, the reader gets to relive it as if for the first time on the very battleship with all the fear, awe, terror and camaraderie that led the Union to Victory, and a significant turning point in the Civil War.

A fantastic letter in outstanding condition, accompanied by a complete transcription.