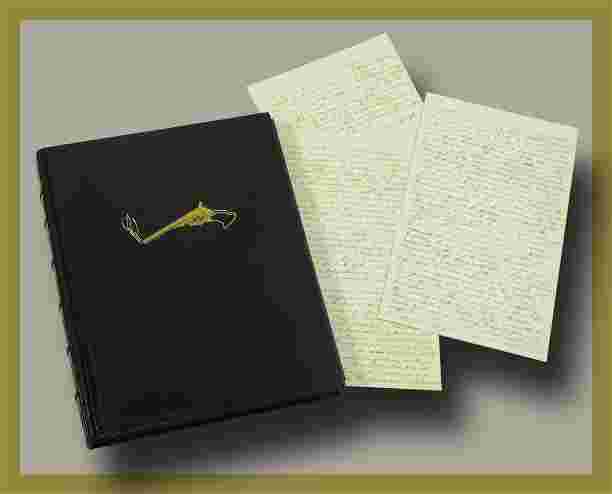 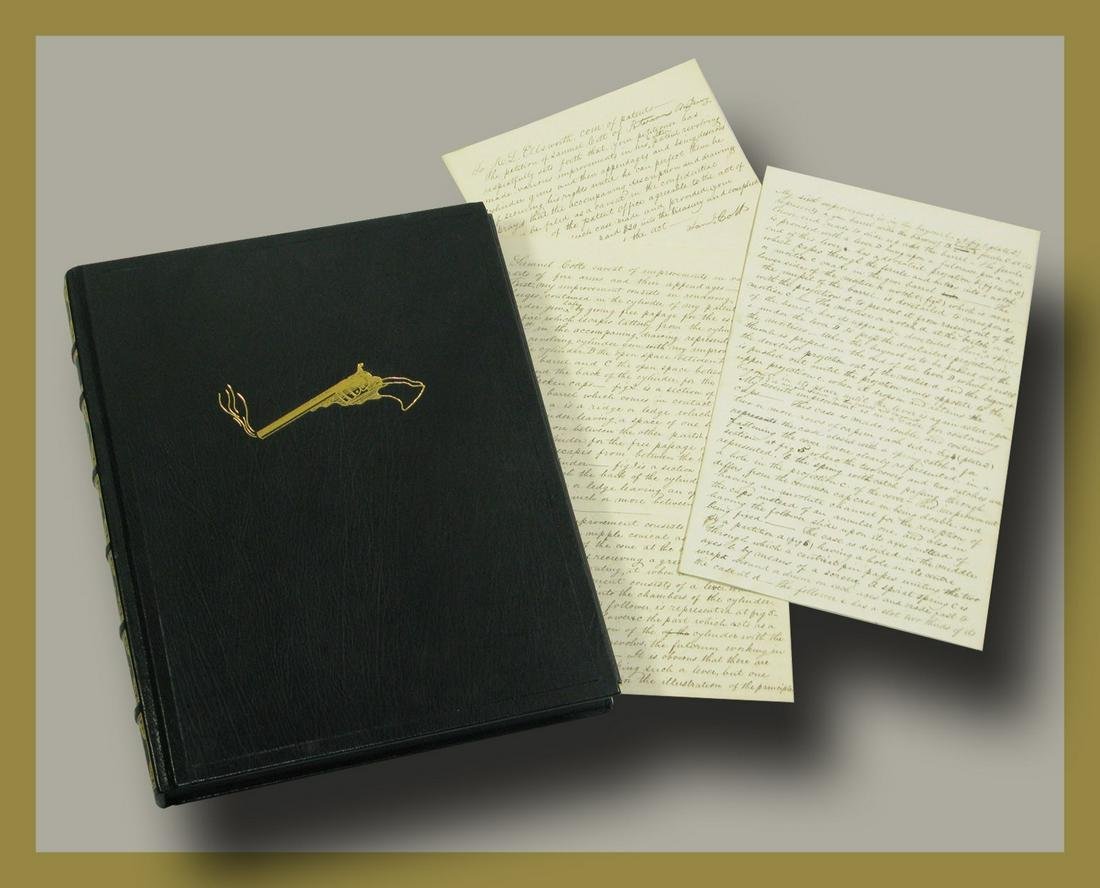 Samuel Colt of Hartford, Connecticut, was granted a patent for "revolving gun” on February 25, 1836. On March 5, 1836, he formed the Patent Arms Manufacturing Company in Paterson, New Jersey, to make the guns in quantity.

Jeff Kinard in “Pistols: An Illustrated History of Their Impact -Weapons and Warfare (Santa Barbara, California: ABC-CLIO, 2003) writes, “In 1837 the new factory produced its first product, the tiny, five-shot Pocket Model Paterson Revolver … Colt’s factory also produced the larger, five-chambered, caliber .31 Colt Belt Model Paterson Revolvers No. 2 and No. 3. The most famous of all Colt’s early production, however, was the Colt Holster Model Paterson Revolver No. 5, better known as the Texas Paterson … The Paterson No. 5 appeared on the market [in 1838] only two years after Texas won independence from Mexico and one of the greatest periods of western expansion by the United States. Those attempting to tame the new frontier found it a violent and hostile place where one lived and died by the gun. Texans, most notably the Texas Rangers, quickly recognized the advantages of Colt’s big pistol … The Rangers, usually outnumbered in unequaled encounters with hostile Indians, Mexicans, and desperadoes, appreciated the extra firepower of the Colt’s five shots … The Paterson No. 5 quickly attained legendary status, its name permanently associated with Texas and the frontier…” No longer would the Texas Rangers have to pause in battle to reload single-shot pistols and rifles while the Indians continued firing arrows.

On August 29, 1839, Colt was granted a patent for “improvements in firearms and in the apparatus used therewith.” His 1839 patent begins, “Be it known that I, Samuel Colt, of Paterson, in the county of Passaic and State of New Jersey, did obtain Letters Patent of the United States for an Improvement in Fire-Arms, which Letters Patent bear date on the 25th day of February, in the year 1836, and that I have made certain improvements in the construction of the said fire-arms, and also to the apparatus for loading and priming the same; and I do hereby declare that the following is a full and exact description of my said improvements. My first improvements appertain to rifles, guns, and pistols; my second to the construction of a cap-primer for containing the percussion caps and placing the same upon the nipples, and my third to a flask and other apparatus for loading the rifle or gun. For the general construction of my fire-arms, as originally patented I refer to the Letters Patent first above named [1836], the same being necessary to a perfect understanding of the improvements hereon, which I am now about to describe…”

On April 27, 1835, Henry L. Ellsworth, son of patriot Oliver Ellsworth, was sworn in as Mayor of Hartford, Connecticut. He resigned after serving for seven weeks, having been appointed the first Commissioner of the U.S. Patent Office. Ellsworth became interested in Colt's revolver, so he encouraged the 21-year-old Hartford inventor to file a patent. After receiving his 1836 patent, like a true inventor, he began working on improvements to his firearms. He had specific ideas, but he still had to perfect them.

Colt wrote to Ellsworth, telling him that, while not ready to file another patent, he would like to file a caveat to prevent someone else from filing a patent based upon his ideas, before he files his own patent. Colt described in detail his improvements to his original 1836 patent.

Here offered are Samuel Colt’s undated retained drafts of the three documents sent to Commissioner of Patents Henry L. Ellsworth, each on watermarked laid paper, each signed by Colt. Ellipses marks (…) are used for omitted words, references to the drawing. Written in manuscript, there are additions and deletions in Colt’s hand.

Displayed in a custom designed black leather 11” x 14” x 1.25” presentation case with a gold-stamped smoking revolver on the cover.

In full, “To H.L. Ellsworth. Com: of patents – The petition of Samuel Colt of Paterson New Jersey respectfully sets forth that your petitioner has made various improvements in his & other patent revolving cylinder guns and their appendages, and being desirous of securing his rights until he can perfect them, he prays that the accompanying description and drawing may be filed as a caveat in the confidential archives of the patent office agreeable to the act of congress in such case made and provided your petitioner having paid $20 into the treasury and complied with other provisions of the act.”

In part, “Samuel Colts caveat of improvements in various parts of fire arms and their appendages – First my improvement consists in rendering the charges, contained in the cylinder of my patent revolving cylinder gun safe by giving free passage for the escape of the fire which escapes latterly from the cylinder … My second improvement consists in making the touch hole in the nipple conical … having the base of the cone at the outside of the nipple, for the purpose of receiving a greater amount of heat and concentrating it when it reaches the load. My third improvement consists of a lever wherewith to force the balls into the chambers of the cylinder … It is obvious that there are various modes of making such a lever, but one mode is represented for the illustration of the principle. It can be made to apply to all kinds of fire arms that load at the britch or have revolving cylinder chambers such as cochrans and others – My fourth improvement is in the bullet mould ... After the bullet has been cast, the cutter D is pushed to one side which clips off the stem and leaves the bullet finished – My fifth improvement consists in the valves of the powder flask – Instead of one valve, as used in the common flask for measuring the quantity of powder, I make use of two, one at the mouth of the flask stem and the other inside. When one is shut the other is open, and vice versa … It is evident that all the parts above enumerated can be made and altered in various ways not necessary to enumerate; can but the object at present is to elucidate and secure the principle until they can be patented.” Colt has handwritten: “The above principle is also applicable and has been applied by me to a flask having a number of tubes or chargers which expedite the loading of many chambered guns of all kinds.” Colt has crossed out the short paragraph beginning “My sixth improvement is a military belt…”

In part, “My sixth improvement is in the bayonet = A (fig 1. Plate 2) represents a gun barrel with the bayonet B having a ferule C at its lower end made to slide up and [down] the barrel … The mortise or notch d. at the britch end of the barrel has its upper side dovetailed…” Cold has handwritten fig 3 is an end view of the barrel and bayonet. My seventh improvement is in a case for containing caps … This improvement differs from the common cap case in being double, and having an involute channel for the reception of the caps instead of an annular one, and also in having the follower slide upon its axes instead of being fixed … the cover is opened and the involute channel filled with caps, the catch h is then disengaged and the cover fastened … The operation is the same on each side but independent of each other, the central pin allowing the axes to work independent of each other.”

“The Colt revolver was known as ‘the gun that won the West’ … A popular post-Civil War slogan said ‘Abe Lincoln may have freed all men, but Sam Colt made them equal,’” wrote reporter Stephen H. Wyman in his 1989 article about Colt Firearms in the “Washington Post.”

At the August 28, 1999, sale held by Early American History Auctions, these three documents in their presentation case was estimated at $100,000-up.

Samuel Colt "The Gun that Won the West" 3 Signed Patent