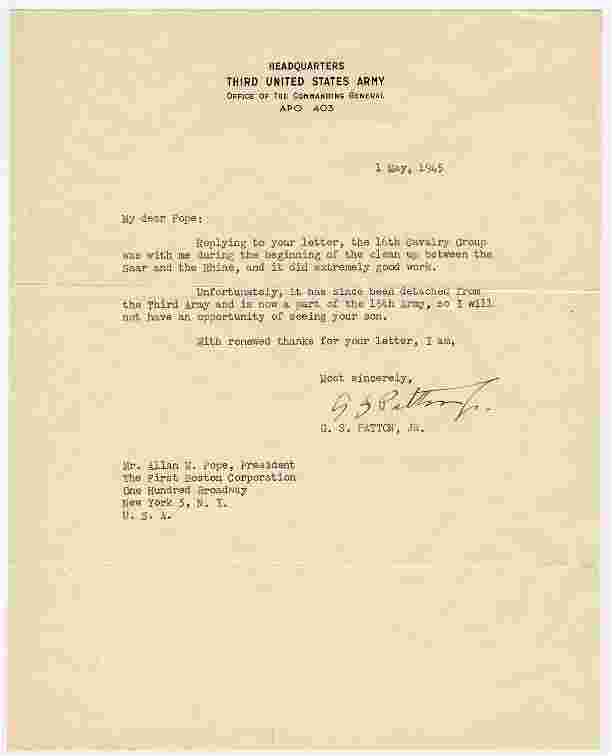 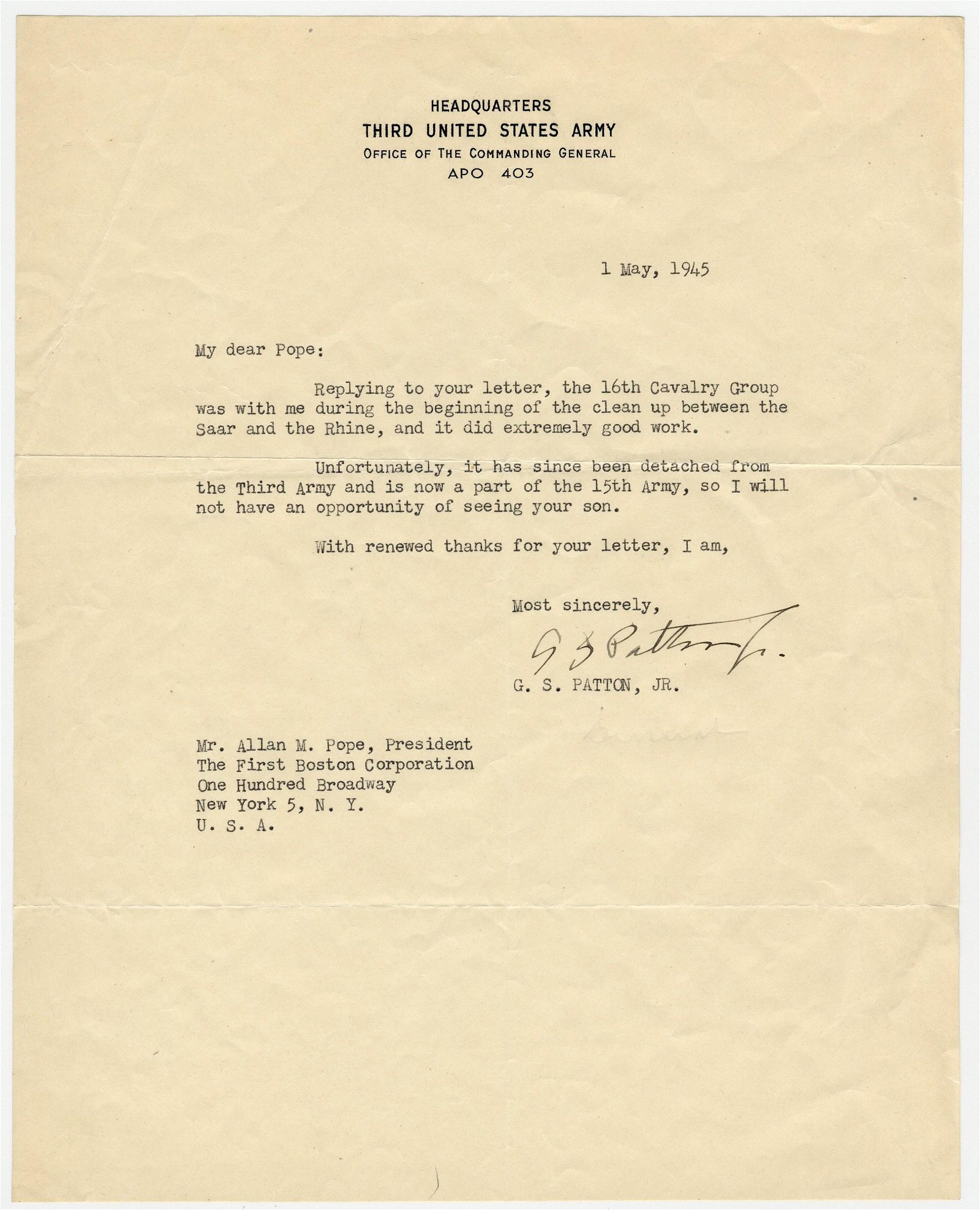 George Patton, Jr. TLS,WWII "the 16th Cavalry Group was with me during the beginning of the clean up between Saar and the Rhine, and it did extremely good work."

General Patton had received his promotion to the rank of 4-star General just two weeks earlier, on April 14, 1945, to acknowledge the commander's tremendous contributions to the Allied war effort. World War II was winding to a devastating close. Patton's Third Army was somewhere in Czechoslovakia or Austria on May 1, 1945, and other Allied forces were closing in. In Berlin, Nazi Propaganda Minister Joseph Goebbels and his entire family died in a murder-suicide the very day Patton wrote this letter. In just 7 days, on May 8, 1945, the Nazis would surrender on V-E Day.

General Patton wrote this letter to Colonel Allan Melvill Pope (1879-1963). Pope was a fellow West Point graduate (Class of 1903, 6 years earlier than Patton), and was a successful bank executive; he headed up the First Boston Corporation, based in New York City, which had been founded in 1932. Patton's letter was in response to Pope's inquiry regarding his son, Thomas Melvill Pope (1916-2000), who had, until recently, been assigned to the 16th Cavalry Group attached to Patton's Third Army. (Patton had himself been a cavalry officer during World War I.)

In the letter, Patton writes that "the 16th Cavalry Group was with me during the beginning of the clean up between Saar and the Rhine, and it did extremely good work." Patton refers to a period between February and March 1945, when the Third Army crossed from the Saar River, located near the French/German border, towards the Rhine River, located approximately 80 miles to the east. General Patton liked to recount how he urinated in the Rhine River while crossing it.

Patton had received command of the Third Army in late January 1944. The Third Army would see 281 days of active combat between August 1944 and V-E Day. Third Army troops, which numbered about 250-300,000 men, eventually reclaimed 81,500 square miles of territory including over 12,000 cities and towns from the Nazis. Conservative estimates of Nazis killed, wounded, or captured by the Third Army exceed 1 million.

George Patton, Jr. was a career military officer whose 36 years of military service spanned three military conflicts including both world wars. Patton sortied against partisans of Pancho Villa in Mexico in 1915-1916, and he was later dispatched to the Western Front as a personal aide to General John "Black Jack" Pershing. It was during World War II, however, that Patton made his most indelible mark. "Old Blood and Guts" served as an army commander leading Allied expeditions in North Africa, Sicily, Normandy, eastern France, the Benelux Countries, and Germany. Patton died of complications following a car accident in Luxembourg in December 1945.