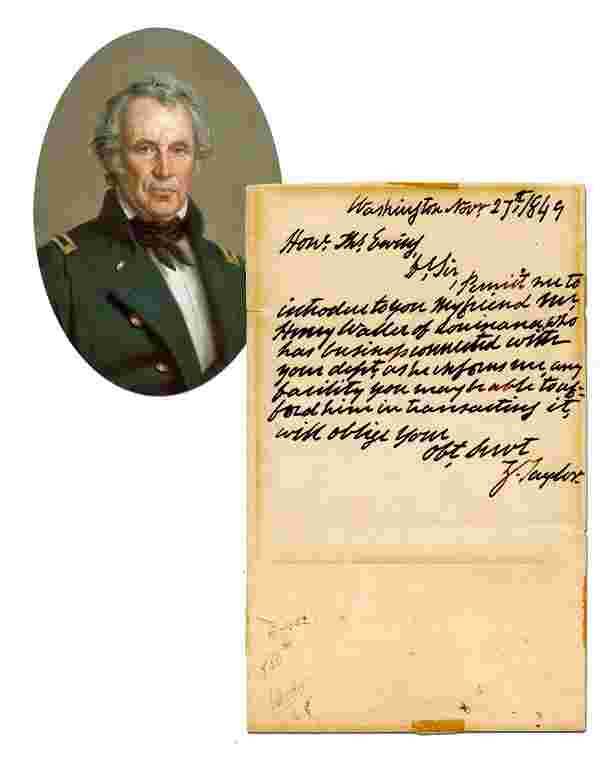 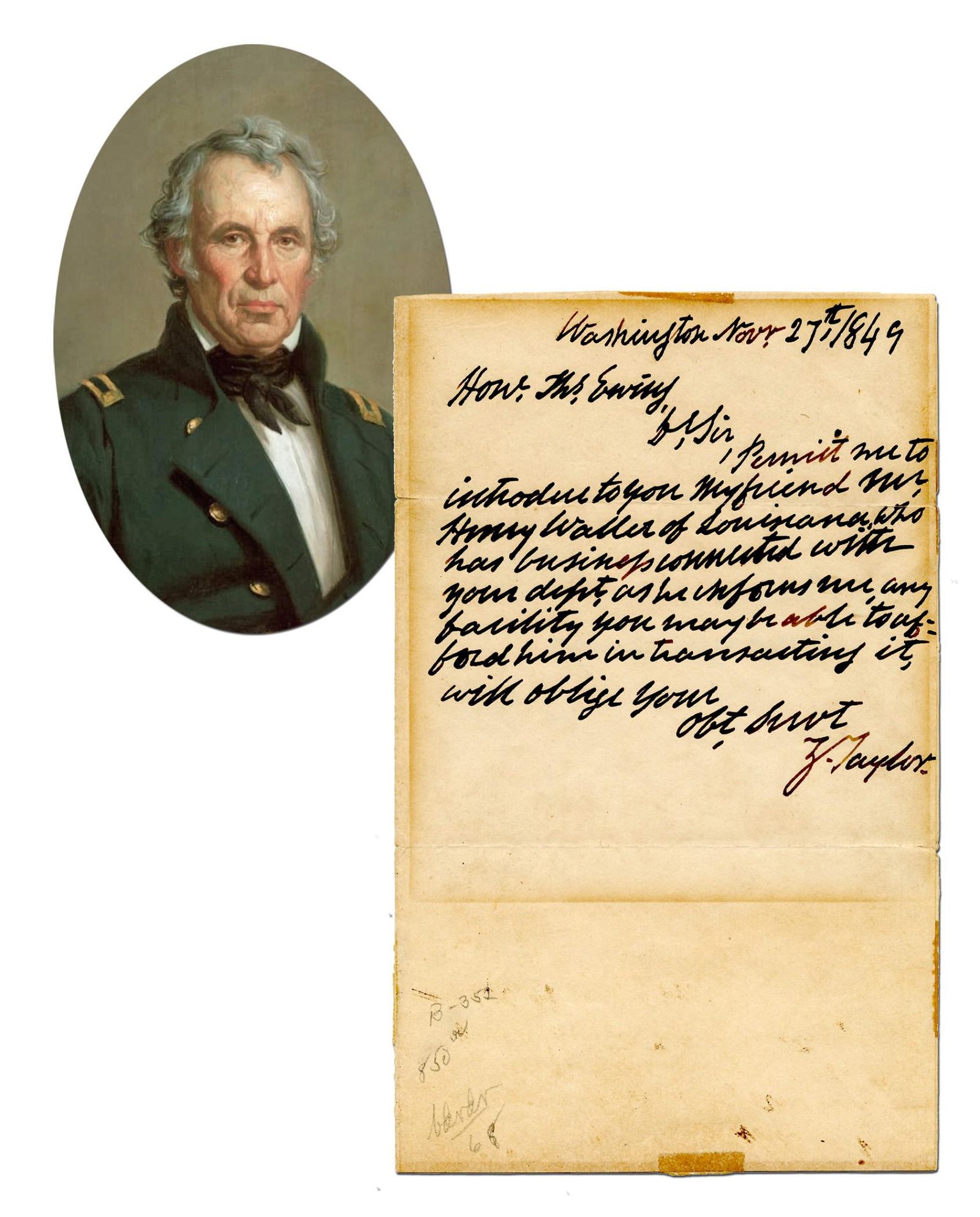 In this brief letter, President Zachary Taylor writes to his Secretary of the Interior Thomas Ewing to introduce Henry Waller (1808-1854) of Louisiana. Surveyor General Robert W. Boyd had commissioned Waller as a deputy surveyor for the district of Louisiana on July 12, 1849, and Waller’s purpose for visiting Washington may have been related to his duties as deputy surveyor.

Permit me to introduce to you. My friend Mr Henry Waller of Louisiana, who has business connected with your dept, as he informs me, any facility you may be able to afford him in transacting it, will oblige.

Zachary Taylor (1784-1850) was born in Virginia and in 1810 married Margaret Smith, with whom he had six children. In 1808, Taylor joined the army with a commission as a first lieutenant. During the War of 1812, he successfully defended a fort in Indiana Territory from an attack by Native Americans. By 1819, he had been promoted to lieutenant colonel, and he served in the Black Hawk War in Illinois and in the Second Seminole War in Florida. His Christmas Day victory at the Battle of Lake Okeechobee in 1837 gained him promotion to brigadier general. After posts in Florida and Arkansas, Taylor was posted to Louisiana in anticipation of the annexation of Texas. Although Winfield Scott and Edmund P. Gaines were more senior generals, they were closely identified with the Whig Party, and Democratic President James K. Polk selected the apolitical Taylor for the task. Taylor moved his forces to near Corpus Christi, Texas, before advancing to the Rio Grande in March 1846. During the Mexican War, Taylor led his army to victories at the Battles of Palo Alto, Resaca de la Palma, and Monterrey. After many of his troops were transferred to the command of General Winfield Scott, he successfully resisted an attack by the Mexicans at the Battle of Buena Vista in February 1847. As a career army officer, Taylor had not been involved in politics, but the Whigs nominated him as their presidential candidate in 1848. He defeated Democrat Lewis Cass and Free Soil candidate Martin Van Buren to win the presidency and took office in March 1849. His brief presidency was marked by preparations for the admission of California as a state, the organization of Utah as a territory, and the Clayton-Bulwer Treaty of 1850 with Great Britain to construct a canal between the Atlantic and Pacific Oceans through Nicaragua. Taylor died suddenly in Washington on July 9, 1850, and Vice President Millard Fillmore became president.

Thomas Ewing (1789-1871) was born in western Virginia (now West Virginia), studied at Ohio University, and read law with a practicing attorney before gaining admission to the bar in 1816. He opened a practice in Lancaster, Ohio, and in 1830, won election as a Whig to the U.S. Senate. He served in that position from 1831 to 1837. In 1841, he served as Secretary of the Treasury under Presidents William Henry Harrison and John Tyler, but resigned in September along with most of the Cabinet in protest of Tyler’s veto of the Banking Act. President Zachary Taylor appointed him as the first Secretary of the Interior, and he held that position from March 1849 to July 1850, under Presidents Taylor and Millard Fillmore. He resigned to return to the U.S. Senate but was unsuccessful in gaining reelection in the 1850 election. He served as a member of the peace conference in Washington in 1861, and President Andrew Johnson appointed him as Secretary of War in 1868, but the Senate refused to act on the nomination. Ewing married Maria Wills Boyle, a Roman Catholic, and they raised their children in that faith. His foster son was William T. Sherman, and Sherman married Ewing’s daughter Ellen.