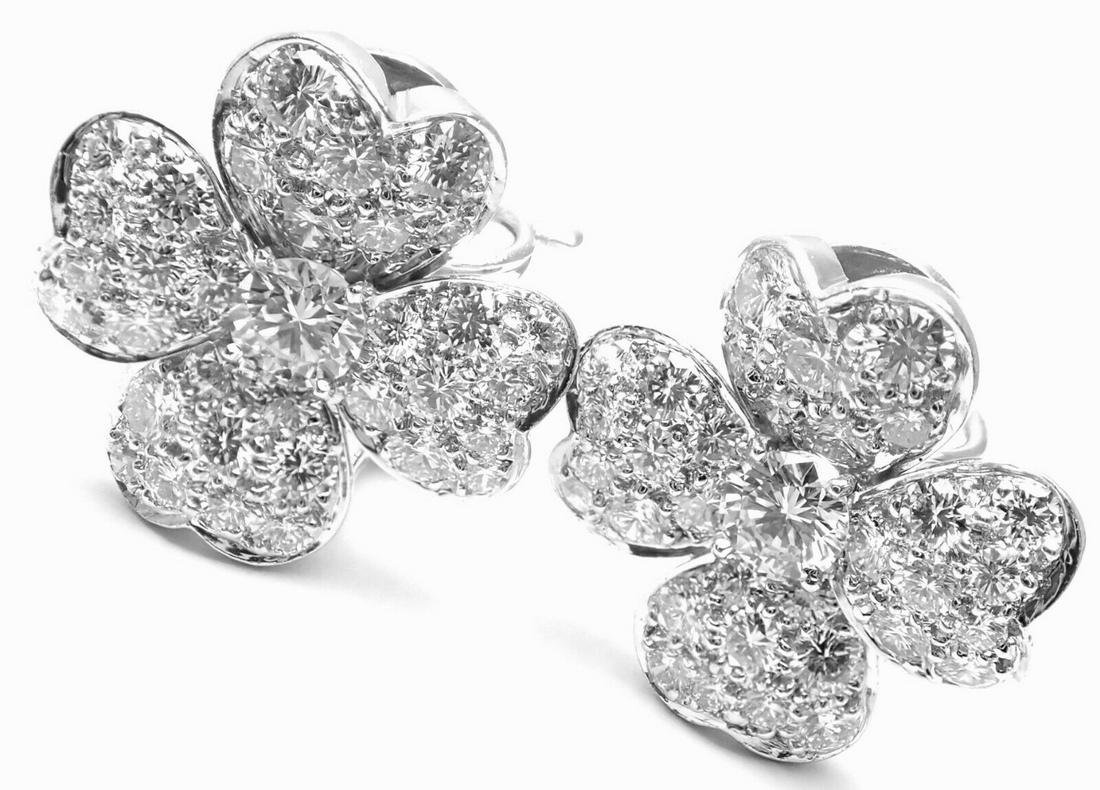 You are bidding on a Rare! Authentic Van Cleef & Arpels Cosmos Platinum Diamond Earrings.
These earrings are for pierced ears.
These earrings come with Van Cleef & Arpels valuation for insurance from 2001.
About Van Cleef & Arpels:
In 1896, Esther Arpels, the daughter of Salomon Arpels, a dealer in precious stones, married Alfred Van Cleef, whose family were sheet merchants living in the 19th arrondissement of Paris. That same year, Alfred Van Cleef and Salomon Arpels had already established a company with the aim of â€œfounding and running a jewellery business”. In 1906, they registered the â€œVan Cleef & Arpels” trademark and opened a boutique at 22 place VendÃ´me. They were soon joined by Estherâ€™s brothers, Salomon, Jules and Louis Arpels. Alfred Van Cleef died in 1938, leaving his daughter, RenÃ©e Rachel Puissant, behind him. From 1909 to 1939, Van Cleef & Arpels prospered and opened boutiques in holiday resorts such as Deauville, Le Touquet, Nice and Monte-Carlo.
Progressively, the second generation joined the business. In 1942, the Arpels family emigrated to America and opened their first boutique in New York, on 5th Avenue. Later, Van Cleef & Arpels became the first French jewellers to open boutiques in Japan and China. Over the years, the firm was always managed by a descendant of the Arpels family, until it was acquired by the Compagnie FinanciÃ¨re Richemont S.A. in 1999. The companyâ€™s prestige stems from a long list of prominent commissions issued by royal and imperial courts, financiers and industrial magnates, which have enabled Van Cleef & Arpels to be active today not only in Europe and the United States, but also in Asia and the Middle East.
More About the Piece: