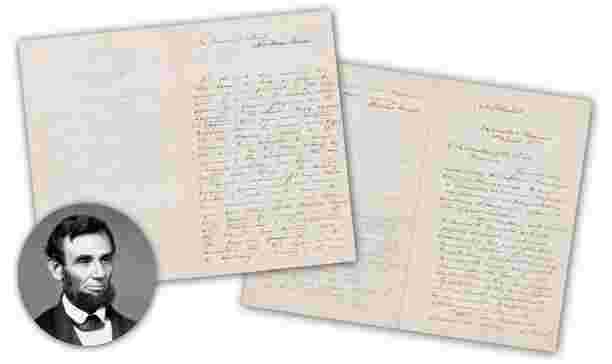 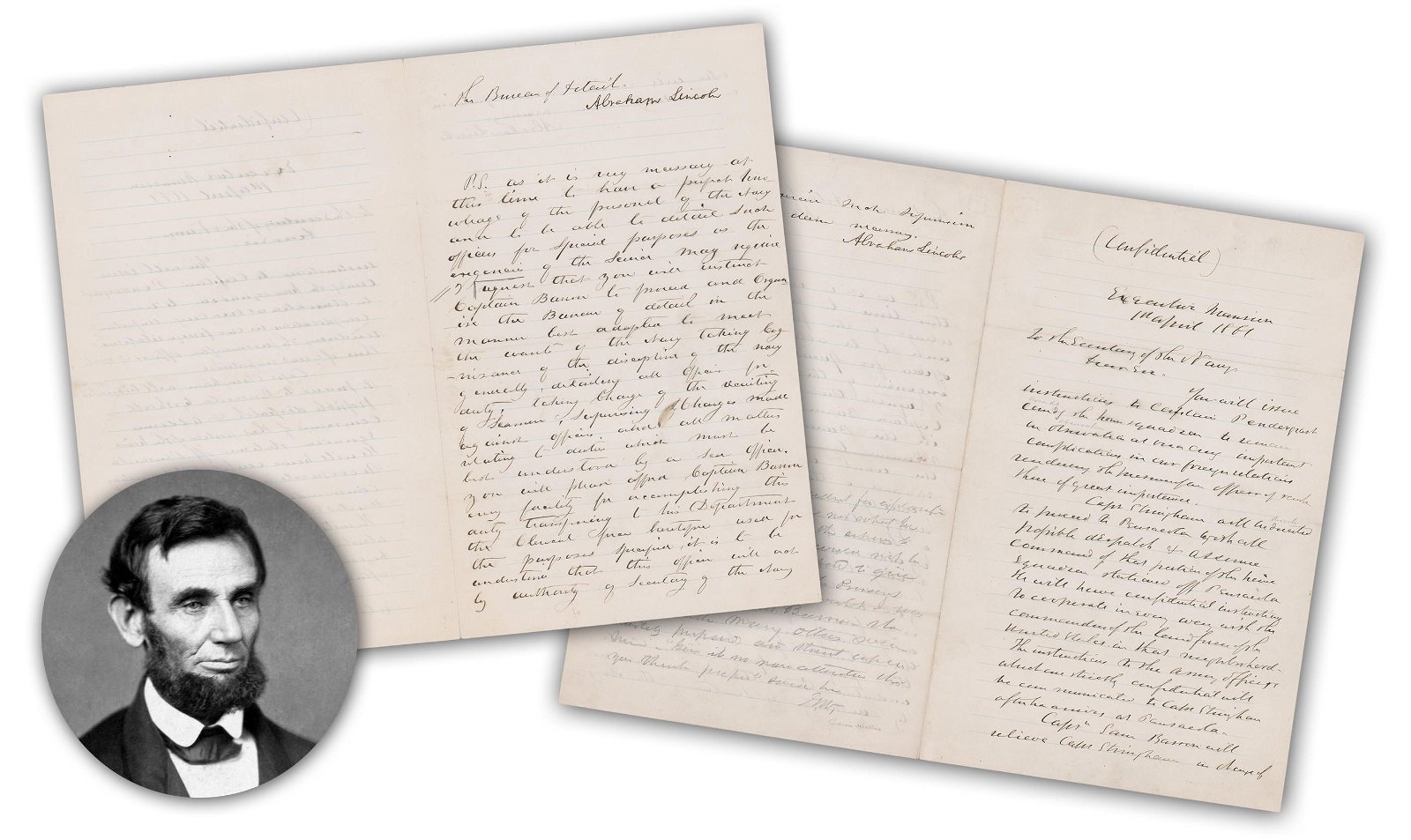 A 2 1/4 pp letter addressed to U.S. Secretary of the Navy Gideon Welles (1802-1878), signed twice by 16th U.S. President Abraham Lincoln (1809-1865), both times as "Abraham Lincoln" on the top of the third and fourth pages respectively. Issued from the Executive Mansion in Washington, D.C. on April 1, 1861. Inscribed by Montgomery C. Meigs and David D. Porter, and with a penciled note by Gideon Welles initialed "G.W." at the bottom of the fourth page. On bifold blue-ruled legal sheets. The second page is blank. Expected wear including light folds and several closed tears along the gutter, along with a few stray pencil marks, else near fine. 12.875" x 8". Accompanied by an oversized Christie's folder. Provenance: Christie's, "The Forbes Collection of American Historical Documents, Part Five", offered as Lot 72 at their November 2, 2006.

The letter tells a fascinating story of subterfuge and duplicity on the eve of the Civil War, and is a most remarkable instance of the infighting that often paralyzed Lincoln's administration. The superb content of this letter, combined with the fact that it is among the earliest Lincoln presidential letters in private hands, makes it very desirable among Lincoln, Civil War, and presidential collectors.

Both contemporary accounts and handwriting analysis reveal that the letter was drafted by two junior officers mistrustful of Gideon Welles, this last recently appointed as Secretary of the Navy in March 1861. The pair of schemers were Montgomery C. Meigs (1816-1892), a career army officer and civil engineer, and David D. Porter (1813-1891), a Mexican War veteran naval officer.  Meigs penned the body of the letter while Porter added the postscript. Comparison with known handwriting samples of Meigs and Porter confirm that the two men wrote the letter and orchestrated the ploy.

Lincoln had appointed Welles as Secretary of the Navy despite the latter's lack of practicable naval experience. Evidently, Meigs and Porter took it upon themselves to intercede on behalf of Welles, whom they probably considered an ineffectual civilian and the worst kind of landlubber. Thus, just eleven days prior to the bombardment of Ft. Sumter, and with the Department of the Navy thrown into chaos by numerous defections to the South, two officers had tried to usurp Welles's authority.

The document seems innocuous enough; it concerned staffing assignments in eastern Mexico and the Florida panhandle. But the directive was drafted by subordinates motivated by their own agenda and completely unaware of official policy. It subverted all normal channels of authority, and the chain of command would prove essential during wartime. Lincoln had unwittingly signed a document--not once but twice--commanding his No. 1 to follow directives hatched by two crafty subordinates!

As Welles explains in the note at the bottom of the letter, when he confronted the President about the memo, Lincoln admitted that "he really knew not what he was signing". Lincoln entirely deferred to Welles's judgment about the matter. Nearly ten years later, in an article published in the November 1870 issue of Galaxy, Welles elaborated about the deception of the "disloyal clique" that had attempted to hoodwink the President.

Welles was able to prevent the personnel reassignments proposed by Meigs and Porter. He commented with some satisfaction in the Galaxy article: "Pendergrast did not go to Vera Cruz nor Stringham to Pensacola", referring to officers Silas H. Stringham and Garrett J. Pendergrast mentioned in the letter. Yet it would be some months before Welles was able to ensure that the Department of the Navy was on a reliable wartime footing.

The context of this letter is even more complex when one considers the military track record of both conspirators, Meigs and Porter. In the fall of 1860, Meigs had been expelled to Tortugas by President Buchanan's Secretary of War John B. Floyd, and was only recalled to Washington, D.C. after Floyd defected to the Confederacy. In April 1861, Meigs--along with none other than David D. Porter--were tasked by President Lincoln to strategize how to relieve Fort Pickens, Florida. This secret expedition was undertaken without the knowledge of either Secretary of War or the Navy. Ironically, the plan to relieve Fort Pickens by dispatching the U.S.S. Powhatan effectively destroyed any chance of relieving Fort Sumter during its forthcoming bombardment. It seems Meigs and Porter excelled in clandestine operations.

It is unclear if Meigs or Porter were ever reprimanded for their insubordination against Welles, though evidence suggests otherwise. Meigs was appointed Quartermaster General of the Union Army in mid-May 1861, and he performed so well that he was renowned for his competency and honesty. Interestingly, Meigs was also present at Lincoln's deathbed.

Porter, despite Welles's reservations, attained the rank of Acting Rear Admiral in the fall of 1862. We can only surmise how many of the comments in Welles's diary entry were based on recollections of the April 1, 1861 imbroglio: "[Porter] … has great energy, excessive and sometimes not over-scrupulous ambition…Is given to cliquism but is brave and daring like all his family... It is a question, with his mixture of good and bad traits, how he will succeed."

Transcribed in full, with the original spelling and punctuation:

To the Secretary of the Navy

You will issue instructions to Captain Pendergrast comdg the home squadron to remain at Vera Cruz important complications in our foreign relations rendering the presence of an officer of rank there of great importance.

Capt Stringham will be directed to proceed to Pensacola with all possible despatch + assume command of that portion of the home squadron stationed off Pensacola He will have confidential instructions to cooperate in every way with the commander of the land forces of the United States in that neighborhood.

The instructions to the army officers which are strictly confidential will be communicated to Capt Stringham after he arrives at Pensacola.

Captn Sam Barron will relieve Capt Stringham in charge of the Bureau of detail.

P.S. as it is very necessary at this time to have a perfect knowledge of the personel of the Navy and to be able to detail such officers for special purposes as the exigencies of the Service may require I request that you will instruct Captain Bannon to proceed and Organize the Bureau of detail in the manner best adapted to meet the wants of the Navy taking Cognizance of the discipline of the navy generally, detailing all officers for duty, taking Charge of the recruiting of Seamen Supervising Charges made against officers, and all matters relating to duties which must be best understood by a Sea Officer. you will please afford Captain Barron every facility for accomplishing this duty transferring to his Department the Clerical force heretofore used for the purposes specified, it is to be understood that this officer will act by authority of Secretary of the Navy who will exercise such supervision as he may deem necessary.