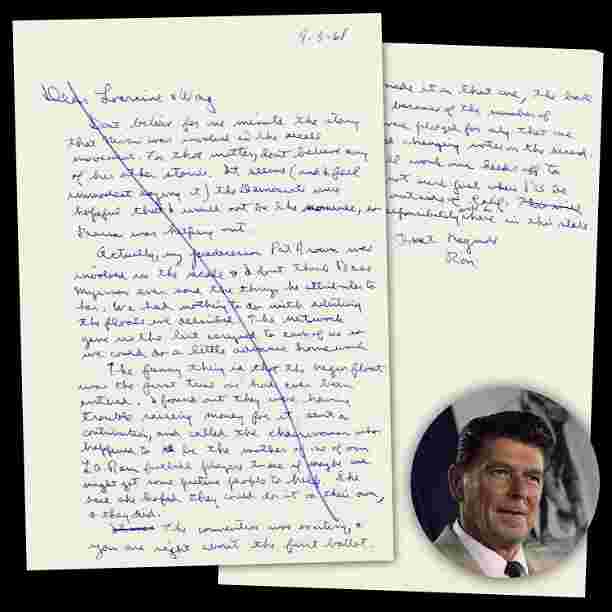 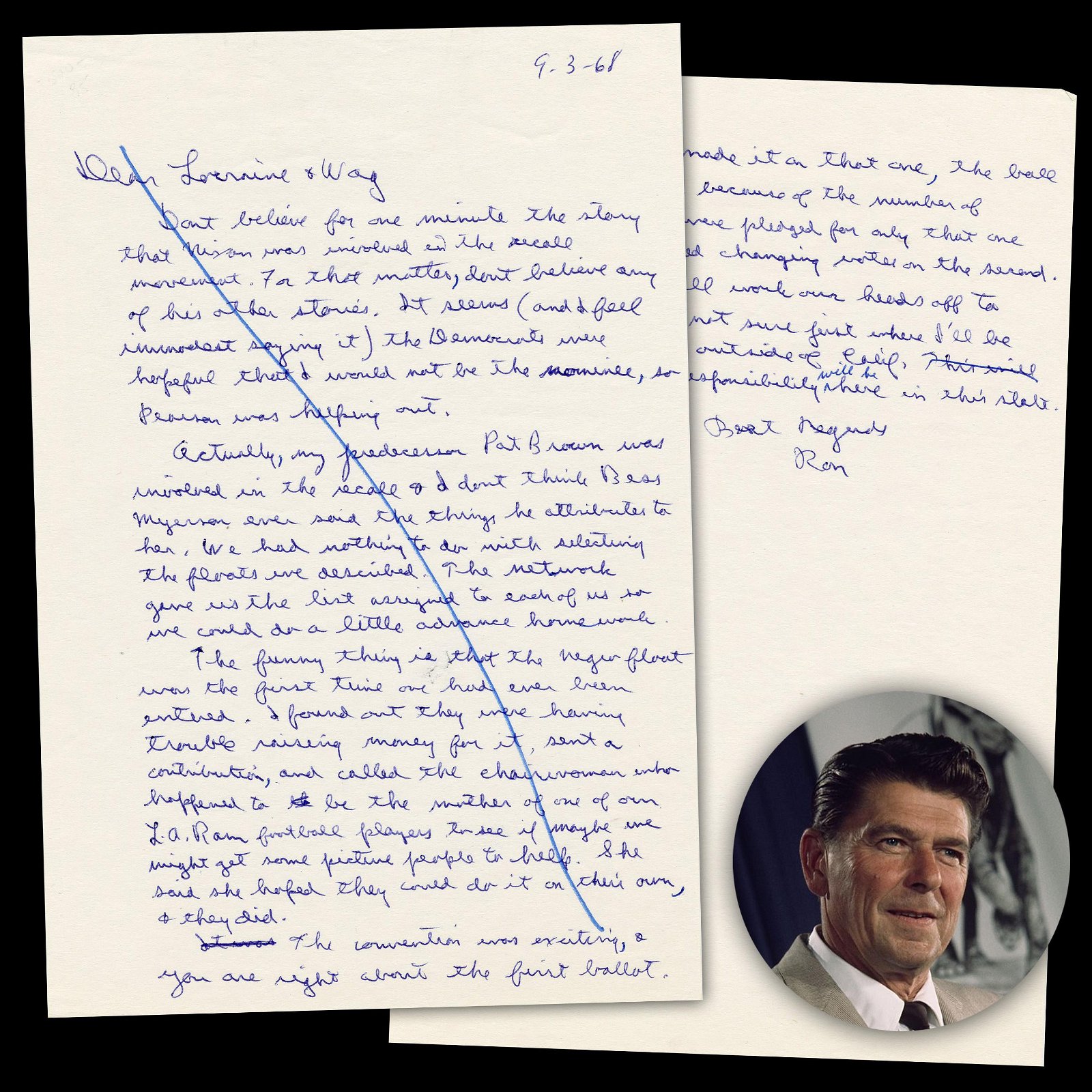 Reagan Bashes Nixon in '68 Primaries & Comments on Parade: "the Negro float was the first time one had ever been entered"

2pp draft of an autograph letter fully engrossed by future 40th U.S. President Ronald Reagan (1911-2004), then Governor of California, and signed by him as "Ron"at the top of the second page. Written on September 3, 1968. The last sentence has been crossed-out and edited. The diagonal blue colored pencil slash across the first page does not affect the legibility of the text. Else near fine. 6.375" x 9". Ex-Forbes Collection.

Reagan addressed this letter to old friends Lorraine Makler Wagner and Elmer Wagner, or "Lorraine + Wag", with whom he frequently corresponded. Reagan had befriended Lorraine in 1943, when the exuberant teenager and member of the Philadelphia chapter of the Ronald Reagan fan club had first written her idol. Reagan and Lorraine would exchange hundreds of letters over the next 50 years, and their respective spouses and family members would too. Reagan and Lorraine's correspondence is closely examined in Chapter 24: "Pen Pals" in Kiron K. Skinner's Reagan: A Life in Letters.

The letter contains sensational content relating to the political and cultural climate of 1968, when Governor Reagan faced animosity from multiple fronts, including from fellow Republicans. In the letter, Reagan discusses the recall movement that had been tasked with forcing a special election prior to the 1968 Republican National Convention. The recall movement to replace Reagan as Governor of California was organized as early as January 1968. The movement was spearhead by disaffected educators, labor organizers, and the elderly who not only wanted to remove Reagan from Sacramento but also destroy his chances of a presidential nomination. While Reagan suspected that his predecessor, 32nd Governor of California Edmund "Pat" Brown, Sr. (1905-1996) had been involved in the recall movement, Reagan denied rumors that newly nominated Republican presidential candidate Richard M. Nixon was.

Also containing beguiling content related to a parade -- most likely the Tournament of Roses Parade and Pageant convened every year on or around New Year's Day in Pasadena, California. Since 1959, Reagan had hosted televised Rose Bowl pre-game festivities, which included a procession of floats, marching bands, equestrian units, and a Royal Court presided over by a Rose Queen. In the early 1960s, Reagan had teamed up with Bess Myerson (1924-2014), the first Jewish winner of the Miss America Pageant in 1945. Reagan's collective references to Bess Myerson, a "Negro float", and the "network" (ABC?) suggest Reagan was discussing an unknown controversy at the Tournament of Roses, one probably relating to the processing order of the parade.

In the last part of the letter, Reagan ostensibly puts aside his dislike of onetime rival Richard Nixon and promises to support the latter's presidential bid in California. Reagan was interested in attaining higher political office, even though he had just assumed the office of the Governor of California in January 1967. His "Stop Nixon" movement propelled Reagan to a coveted nomination in the Republican National Convention. At the Convention, which took place August 5-8, 1968 in Miami Beach, Florida, Reagan came in third place behind Richard Nixon and Nelson Rockefeller. It appears, then, that Reagan--personal and political feelings aside--would join the party band wagon and endorse Nixon.

In full, with unchanged spelling and punctuation:

Dont believe for one minute the story that Nixon was involved in the recall movement. For that matter, dont believe any of his other stories. It seems (and I feel immodest saying it) the Democrats were hopeful that I would not be the nominee, so Pearson was helping out.

Actually, my predecessor Pat Brown was involved in the recall + I dont think Bess Myerson ever said that things he attributes to her. We had nothing to do with selecting the floats described. The network gave us the list assigned to each of us so we could do a little advance homework.

The funny thing is that the Negro float was the first time one had ever been entered. I found out they were having trouble raising money for it, sent a contribution, and called the chairwoman who happened to be the mother of one of our L.A. Ram football players to see if maybe we might get some picture people to help. She said she hoped they could do it on their own, + they did.

The convention was exciting, + you are right about the first ballot. If he hadn't made it on that one, the ball game was over because of the number of delegates who were pledged for only that one round + intended changing votes on the second.

Anyway we'll work our heads off to elect him. I'm not sure first where I'll be able to work outside of Calif. This will be My first responsibility will be here in this state.