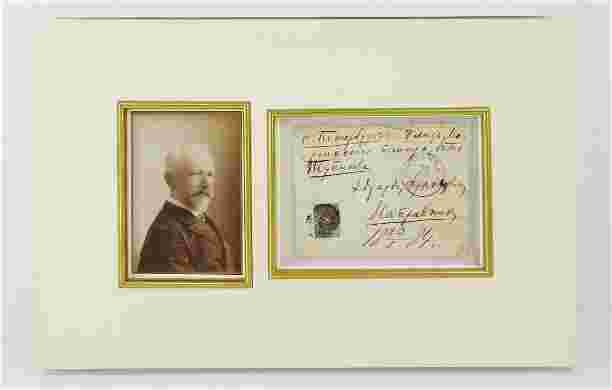 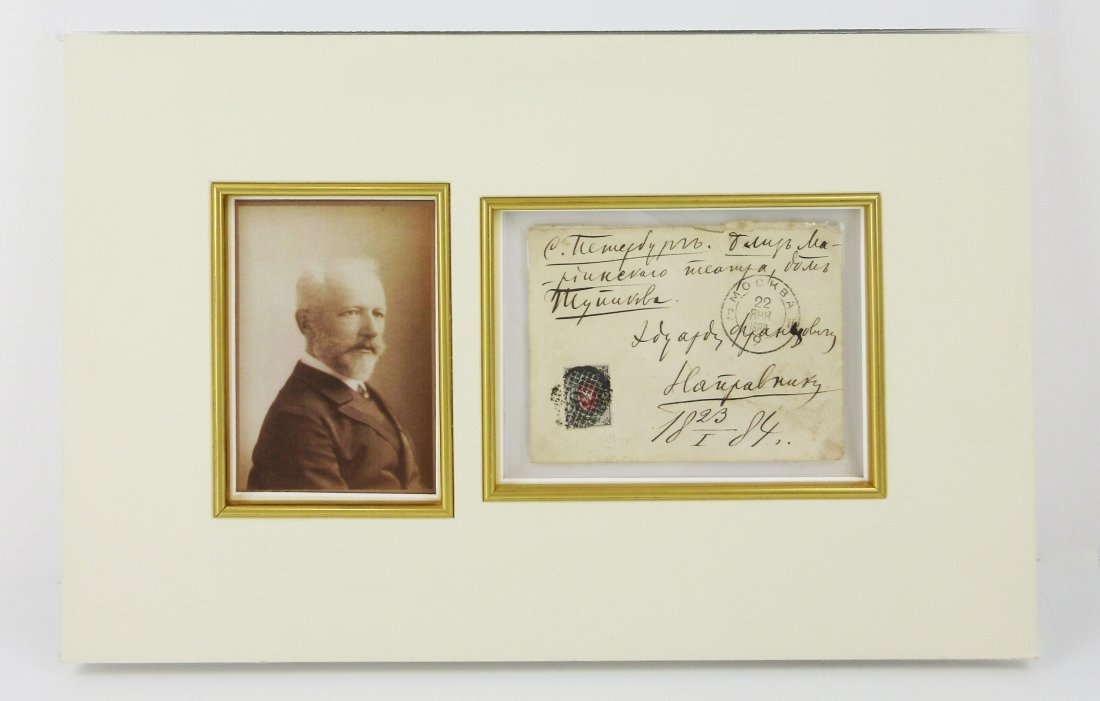 An envelope fully engrossed by Pyotr I. Tchaikovsky, handsomely displayed to the right of a high-quality photo reproduction portrait of the famous Romantic composer in a mat measuring 14" x 9" x .75". The mat is double-sided and has a peekaboo window revealing the back of the envelope. February 3 [OS January 23], 1884, Moscow. The envelope has a decorative "PT" monogram on the return address flap verso. It bears a cancelled stamp and several philatelic markings in Cyrillic. Letter-opened at top, and with expected weathering, else very good to near fine. 3.5" x 4.5". The envelope once contained a letter addressed to conductor Eduard Franzhevich Nápravnik. The letter, in Romanized Russian on “PT” stationery matching our envelope, discussed the production of Tchaikovsky's opera Mazeppa. Accompanied by a photocopy of the original letter.

Full translation of the envelope:

Pyotr Ilyich Tchaikovsky (1840-1893) was born in the Russian Empire and educated by a governess. He began piano lessons at age five and was fluent in French and German by age six. In 1850, his parents sent him to the Imperial School of Jurisprudence in St. Petersburg to prepare for a career in civil service. After two years at a preparatory school, he spent seven years at the Imperial School. After graduation, he worked for three years in the Ministry of Justice. In 1862, he enrolled in the initial class at the Saint Petersburg Conservatory, where his musical talent impressed his instructors. He graduated in 1865 and took a position as Professor of Music Theory in the Moscow Conservatory. From 1867 to 1878, he also wrote musical criticism and continued to compose. His works were performed frequently, and he began to publish songs and piano music for the home market, increasing his popularity. In the late 1860s, he also began to compose operas. From 1877 to 1890, the wealthy widow of a railroad magnate became his patroness, allowing him to focus exclusively on composing. He also toured Europe and the United States in the late 1880s and early 1890s as a conductor. In the mid-1880s, he received a lifetime annual pension from Tsar Alexander III. Tchaikovsky’s masterpieces include the ballets Swan Lake (1875-76), The Sleeping Beauty (1889-90), and The Nutcracker (1892), and the concert overture The Year 1812 Solemn Overture (1880), popularly known as the 1812 Overture. His works include six symphonies, eleven operas, three ballets, two piano concertos, a violin concerto, and several tone poems.