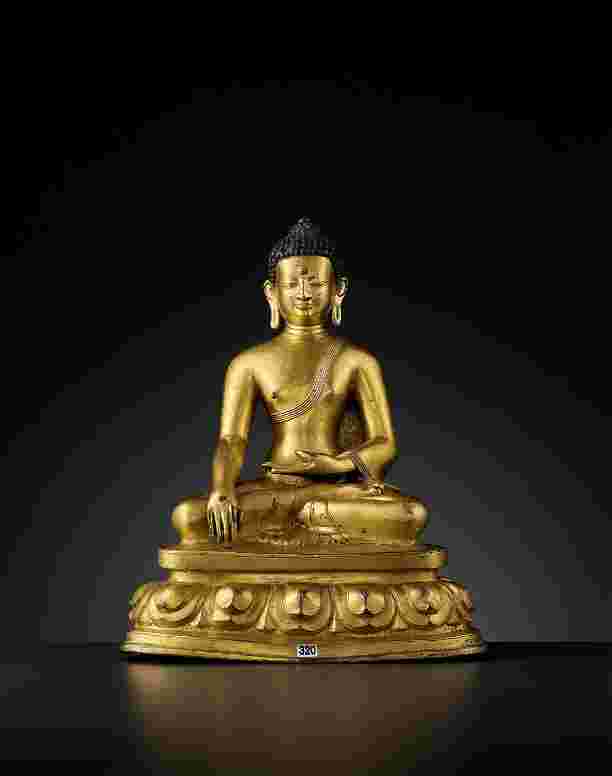 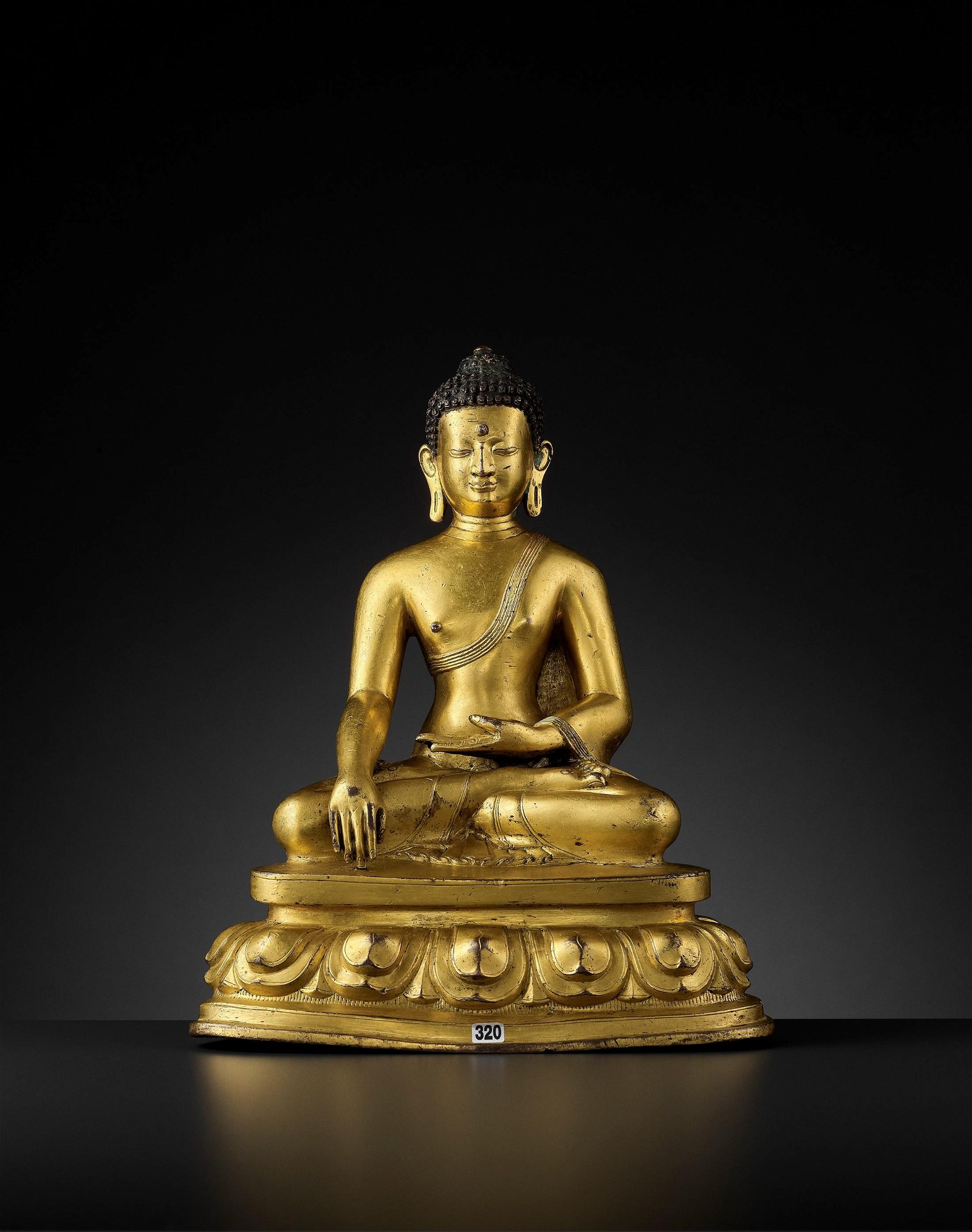 A GILT COPPER ALLOY FIGURE OF BUDDHA SHAKYAMUNI, PROBABLY DENSATIL
Tibet, 14th-15th century. In clean lines and rounded forms, the artist conveys the power and presence of Buddha, with his right hand in the earth-touching position, bhumisparsha mudra, recalling a crucial episode from his spiritual biography in which he triumphs over Mara just prior to his enlightenment.

Provenance: Schoettle Ostasiatica, Joachim Baader, Munich, Germany. Dr. Horst Keller, Duesseldorf, Germany, acquired from the above on 11 February 1991. The original invoice document from Schoettle Ostasiatica is accompanying this lot. Please note that in this invoice, the statue is erroneously dated to the 18th century.
Condition: Unsealed. Traces of use, dents, warping, old wear, remnants of pigment and varnish, verdigris, small losses, all fully consistent with the age of this statue. Overall good condition.

Seated in dhyanasana on a single lotus throne, with robust limbs, broad shoulders, and the thick chest narrowing to a defined waist. The hands in dhyana and bhumisparsa mudra. Wearing a close-fitting five-edged sanghati, with each edge aligned neatly above the other, draped over his left shoulder. His face with serene meditative expression, the spiraling urna meticulously incised in relief on his forehead, finely arched eyebrows, eyes downcast in contemplation, and slightly-smiling bow-shaped mouth, his hair arranged in rows of curls, the domed ushnisha surmounted by a budshaped Chintamani.

The Tang fragment at the back and other distinct Densatil features
The particularly well-proportioned figure with its simple yet sensuous appearance is - at first glance- evocative of high Newari craftsmanship, popularly commissioned by wealthy Tibetan monastic patrons during the 14th and 15th centuries. However, the extra thick method of casting, the compressed and expressively defined lotus petals and, last but not least, the tang fragment at the back of the base are common traits of sculpture typically associated with the famed monastery of Densatil. A superb Cakrasamvara in the Rubin Museum of Art shares the same features (see Pal, Sensuous Immortals, Los Angeles, p. 177, no. 105) along with examples now in the Potala Palace Collection published in von Schroeder, Buddhist Sculptures in Tibet, vol. II, Hong Kong, 2001, pp. 1040-1041, nos. 260A-E.

The second tier of the Tashi Gomang stupas of Densatil, or "Tier of Buddhas"
More specifically, the bronze relates to one of the pre-eminent artistic projects of the 14th and 15th century in Tibet, the Tashi Gomang stupas of Densatil. These tall gilded stupas were packed with Buddha and Bodhisattva sculptures affixed with tangs protruding from the back of each's lotus base. As said, the present sculpture has the remnants of such a tang. The relatively simplistic form and lack of ornamentation is not common at Densatil. However, photographic evidence captured by Pietro Mele, who accompanied the scholar and explorer Giuseppe Tucci to Tibet in 1948, prior to the monastery's destruction, shows related examples set against cast back panels in the second tier of the Tashi Gomang stupa, also called the "Tier of Buddhas" (see Olaf Czaja, Medieval Rule in Tibet: The Rlangs Clan and the Political and Religious History of the Ruling House of Phag mo gru pa. With a Study of the Monastic Art of Gdan sa mthil. Wien, 2013, pp. 661 and 763, pls. 116, 266 and 267. For further discussion on the tier of Buddhas at the Tashi Gomang stupa, see ibidem, pp. 424-6. Also see Olaf Czaja and Adriana Proser, Golden Visions of Densatil: A Tibetan Buddhist Monastery, Asia Society, New York, 2014, fig. 21 and 27). The "Tier of Buddhas" was filled with large Buddha statues together with their entourage of bodhisattvas. Each such large Buddha was accompanied by many smaller Buddha figures of alternating sizes adorning the panels to its left and right. Most surviving fragments from these tiers have holes or tangs that originally fixed the statues to the internal wooden support of the stupa.

While no other examples of Buddhas of this exact type are presently known to this author and the photographic archives are not conclusive, the cited comparative examples and quality of the Buddha provide a compelling argument for a Densatil attribution.

The Densatil Monastery has long been considered one of the great treasures of Tibet. Constructed at the end of the twelfth century in a remote, rocky area of central Tibet, it was most famed for its special stupas - reliquaries that housed the remains of venerated Buddhist teachers. The stupas at Densatil were of a type called Tashi Gomang (Many Doors of Auspiciousness). They were multi-tiered, sculptural gilt copper structures that stood more than ten feet tall and were resplendent with inlays of semiprecious stones. Prior to the destruction of Densatil during China's Cultural Revolution (1966- 1978), eight of them dating between 1208 and 1432 stood in the Monastery's main hall.
Followers of the charismatic Phagmo Drupa Dorje Gyalpo (1110-1170) constructed the Densatil Monastery. His school, which came to be known as Phagmo Drupa Kagyu, was one of the four primary schools of the Kagyu lineage of Tibetan Buddhism. Its noble house became so powerful that their dynasty lasted from the mid-fourteenth to the mid-fifteenth century. Eventually it had died out by the end of the seventeenth century, but the Densatil Monastery survived intact under the control of other Tibetan Buddhist schools until it was destroyed in the mid-twentieth century. Today the monastery is undergoing reconstruction thanks to the efforts of the Tibetan Autonomous Region Ministry of Culture and the Drigung (Drikung) Kagyu school.

1,771 Followers
Get notifications from your favorite auctioneers.
As Seen On
Shop With Confidence
Since 2002, LiveAuctioneers has made exceptional items available for safe purchase in secure online auctions.
Popular Searches
Artists & Creators
Brands
Style Periods
Origins
Company
Winning
Selling
Â© 2002-2020 LiveAuctioneers. All Rights Reserved.Cookie PolicyTerms & ConditionsPrivacy Policy
This site is protected by reCAPTCHA and the Google Terms of Service and Privacy Policy apply.
BACK TO TOP