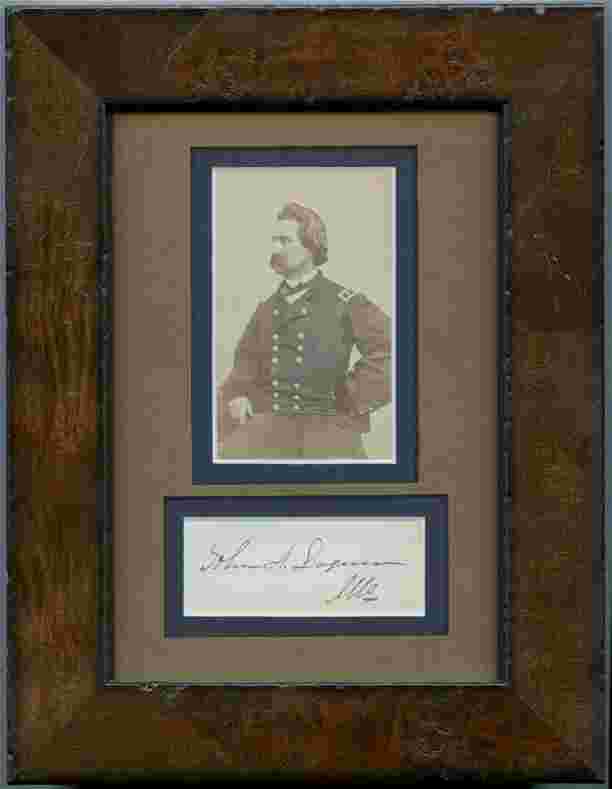 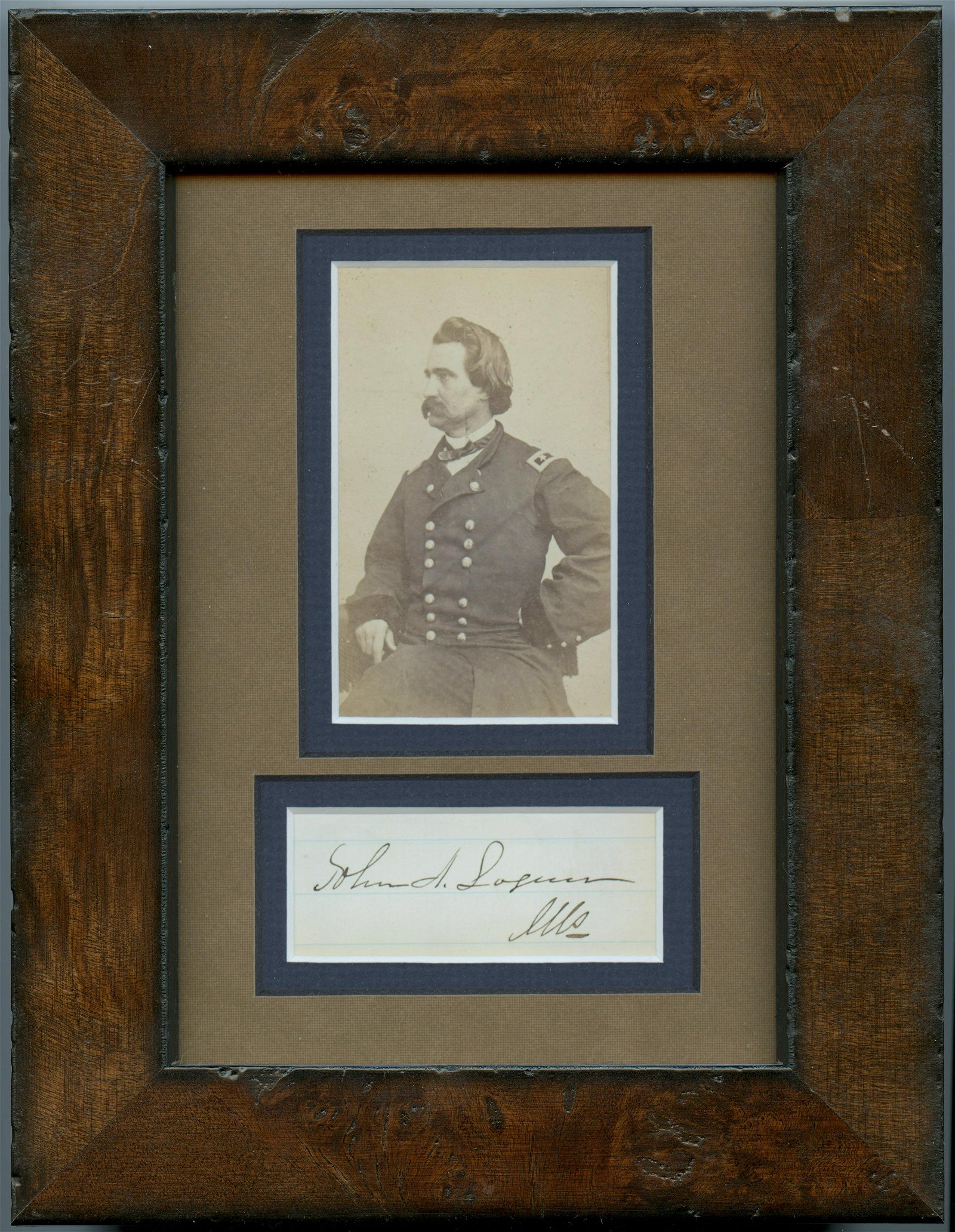 Framed Carte-de-visite (CDV) and cut signature of General John A. Logan. CDV has not been inspected outside frame for imprint. Ink signature is bold with “Ills" (Illinois) written in Logan’s hand underneath his name. Frame measures 9 by 7 inches.

“John A. "Black Jack" Logan, arguably the most successful of the Union army's political generals, was born in pro-slavery region of Southern Illinois in 1826. His father, a successful doctor and farmer, was also heavily involved in local and state politics, representing Franklin and Jackson counties in the Illinois State assembly for nearly a decade. After a smattering of formal and informal education, John Logan volunteered for service in the Mexican War but was mustered out in 1848 without seeing any action. He attended law school at Louisville University and after a brief stint as a prosecuting attorney, turned to politics, winning his father's seat in the state assembly in 1853. Logan was elected to the United States House of Representatives as a Democrat in 1858 and retained his seat in the election of 1860. His political views were in line with his southern Illinois roots. He was anti-abolition, and an ardent supporter of fugitive slave laws. However, where the issue of secession was concerned, Logan could not see eye-to-eye with his fellow Democrats from the South; the Union must be preserved. Logan followed his convictions—and the U.S. Army—into the First Battle of Bull Run, where he was a volunteer with the 2nd Michigan. Afterward, he returned to his home state to raise the 31st Illinois, becoming its colonel. He led the regiment at the Battle of Belmont, Fort Henry, and Fort Donelson where he received a grave wound. While recuperating, the former congressman was promoted to brigadier general and returned to the front as a brigade commander in the Seventeenth Corps of the Army of the Tennessee. Unlike many other politician-generals, "Black Jack" Logan excelled in the military. By March of 1863, Logan was a major general commanding a division. He continued to lead with distinction during the campaign to capture Vicksburg, most notably in the assault following the explosion of a mine. After Vicksburg, Logan was given command of the Fifteenth Corps on October 27, 1863 and continued to earn recognition for his leadership during the Atlanta campaign the following spring and summer. When his immediate superior, Maj. Gen. James B. McPherson was killed in the Battle of Atlanta, Logan temporarily commanded the Army of the Tennessee but was subsequently replaced by West Point graduate Maj. Gen. Oliver O. Howard, presumably because William T. Sherman was skeptical of politicians in uniform. The Illinoisan viewed this as a personal slight which gave him a very dim view of West Pointers in the future. Logan put on his politician hat in the fall of 1864, returning to his home state to campaign for Abraham Lincoln--a marked contrast for the erstwhile Democrat. In December, the major general returned to the field at the head of the Fifteenth Corps until the cessation of hostilities. He was given command of the Army of the Tennessee on May 23, 1865--just in time to lead it in the Grand Review in Washington, DC.”

345 Followers
Get notifications from your favorite auctioneers.
As Seen On
Shop With Confidence
Since 2002, LiveAuctioneers has made exceptional items available for safe purchase in secure online auctions.
Popular Searches
Artists & Creators
Brands
Style Periods
Origins
Company
Winning
Selling
Â© 2002-2020 LiveAuctioneers. All Rights Reserved.Cookie PolicyTerms & ConditionsPrivacy Policy
This site is protected by reCAPTCHA and the Google Terms of Service and Privacy Policy apply.
BACK TO TOP