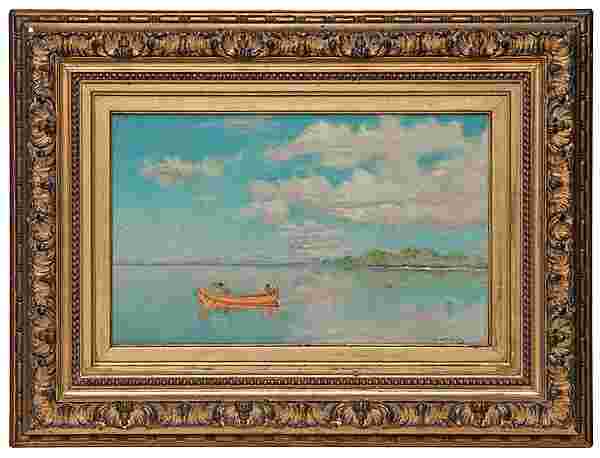 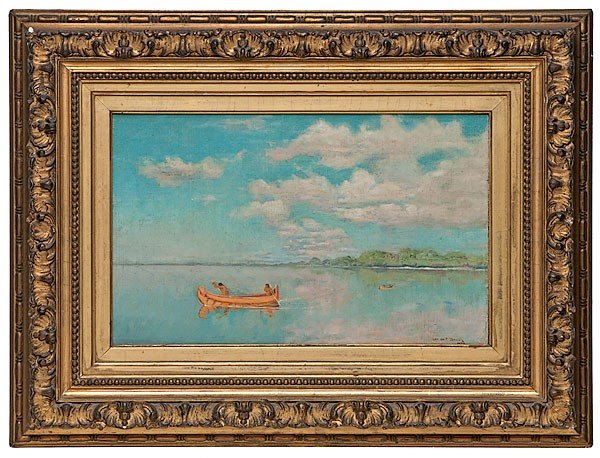 George de Forest Brush, who trained with notable French Orientalist and history painter Jean-Léon Gérôme (1824-1904) at the École des Beaux-Arts, began painting Indian subject matter in 1882 and continued for about a decade. Traveling throughout Wyoming and Montana, and even briefly living at Fort Washakie on the Wind River Reservation, Brush sought to record the daily life of the Shoshone, Crow, and Arapaho Indians. Set in romantic settings, these Indians often look more analogous to Classical portraiture than the Indians pictured in paintings by his contemporaries, Frederic Remington (1861-1909) and Charlie Russell (1864-1926).

Though most of Brush's works exhibit a clear connection to French Salon painting, especially portraiture, this particular painting is similar to the rest of Brush's work. Made at the end of his Indian period (by 1901 Brush redirected his focus to contemporary mother and child portraiture done in the Florentine style), this painting values the landscape over the figures. Isolated and small, the figures in the two canoes are suggested through a few, loose brush strokes. Instead, the serene and sublime landscape, with the large expanse of dotted clouds against a saturated blue background, nearly consumes any sign of inhabitants. This compositional anomaly might in fact bespeak of Brush's own anti-modernist political leanings during the late 1880s. Most Americans at the turn of the 20th century embraced the idea of progress. Brush instead turned to recording the so-called primitive, the noble savage, within a pure and untouched natural setting as a way to emphasize a simpler time prior to industrialization.

Not surprisingly, Brush's Indian portraits have been described as "distinctly American." However until the late 20th century, very little scholarly research and exhibitions significantly discussed these paintings. One of the pervasive reasons might be because many of Brush's Indian works remained in private hands, unbeknownst to scholars. In fact, this painting remained in one Ohio family who acquired it directly from Brush himself. A recent major exhibition at the National Gallery of Art in 2008-2009, titled George de Forest Brush: The Indian Paintings, attempted to ameliorate this absence of scholarship. Focused solely on Brush's rare Indian paintings, this exhibit and the ensuing catalogue brings to light the importance of Brush as an artist of Indian subjects. His purely American subject matter which combined an "Old World training" with "New World themes" attempted to create subject matter, like that seen in this particular rare example, that had "universal appeal."

Ex Private Collection: Cleveland, OH; Purchased directly from the artist and passed down in the family until consigned to this auction.

The painting was recently cleaned but prior to this completely untouched. Some minor perimeter abrasions hidden by the frame. Never lined.

9,995 Followers
Get notifications from your favorite auctioneers.
As Seen On
Shop With Confidence
Since 2002, LiveAuctioneers has made exceptional items available for safe purchase in secure online auctions.
Popular Searches
Artists & Creators
Brands
Style Periods
Origins
Company
Winning
Selling
Â© 2002-2020 LiveAuctioneers. All Rights Reserved.Cookie PolicyTerms & ConditionsPrivacy Policy
This site is protected by reCAPTCHA and the Google Terms of Service and Privacy Policy apply.
BACK TO TOP