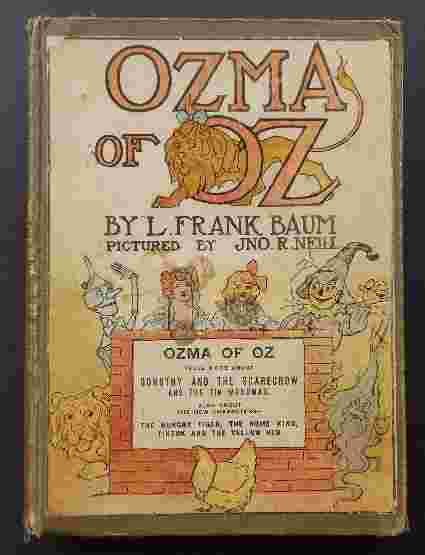 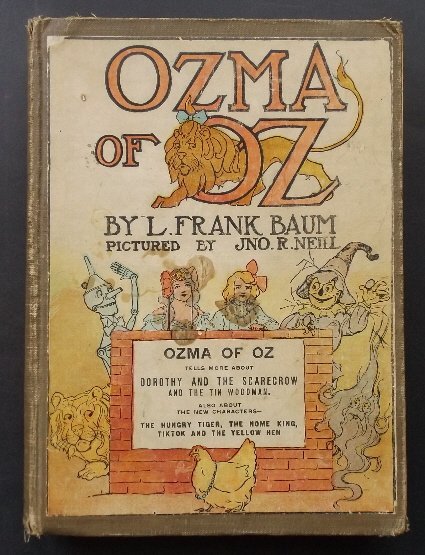 A Record of Her Adventures with Dorothy Gale of Kansas, the Yellow Hen, the Scarecrow, the Tin Woodman, Tiktok, the Cowardly Lion and the Hungry Tiger; Besides Other Good People too Numerous to Mention. Faithfully Recorded Herein.

"Author's Note: My friends the children are responsible for this new "Oz Book," as they were for the last one, which was called The Land of Oz. Their sweet little letters plead to know "more about Dorothy"; and they ask: "What became of the Cowardly Lion?" and "What did Ozma do afterward?"--meaning, of course, after she became the Ruler of Oz. And some of them suggest plots to me, saying: "Please have Dorothy go to the Land of Oz again"; or, "Why don't you make Ozma and Dorothy meet, and have a good time together?" Indeed, could I do all that my little friends ask, I would be obliged to write dozens of books to satisfy their demands. And I wish I could, for I enjoy writing these stories just as much as the children say they enjoy reading them.

Well, here is "more about Dorothy," and about our old friends the Scarecrow and the Tin Woodman, and about the Cowardly Lion, and Ozma, and all the rest of them; and here, likewise, is a good deal about some new folks that are queer and unusual. One little friend, who read this story before it was printed, said to me: "Billina is REAL OZZY, Mr. Baum, and so are Tiktok and the Hungry Tiger." [L. FRANK BAUM. MACATAWA, 1907.]

John Rea Neill (Philadelphia, Pennsylvania, November 12, 1877 - September 13, 1943) was a magazine and children's book illustrator primarily known for illustrating more than forty stories set in the Land of Oz, including L. Frank Baum's, Ruth Plumly Thompson' s, and three of his own. His pen-and ink drawings have become identified almost exclusively with the Oz series. Neill brought his own unique flair to the illustrations, showing more artistic representations of the characters as well as beautiful paintings of numerous scenes. In fact, he was later named the Imperial Illustrator of Oz.

703 Followers
Get notifications from your favorite auctioneers.
As Seen On
Shop With Confidence
Since 2002, LiveAuctioneers has made exceptional items available for safe purchase in secure online auctions.
Popular Searches
Artists & Creators
Brands
Style Periods
Origins
Company
Winning
Selling
© 2002-2020 LiveAuctioneers. All Rights Reserved.Cookie PolicyTerms & ConditionsPrivacy Policy
This site is protected by reCAPTCHA and the Google Terms of Service and Privacy Policy apply.
BACK TO TOP