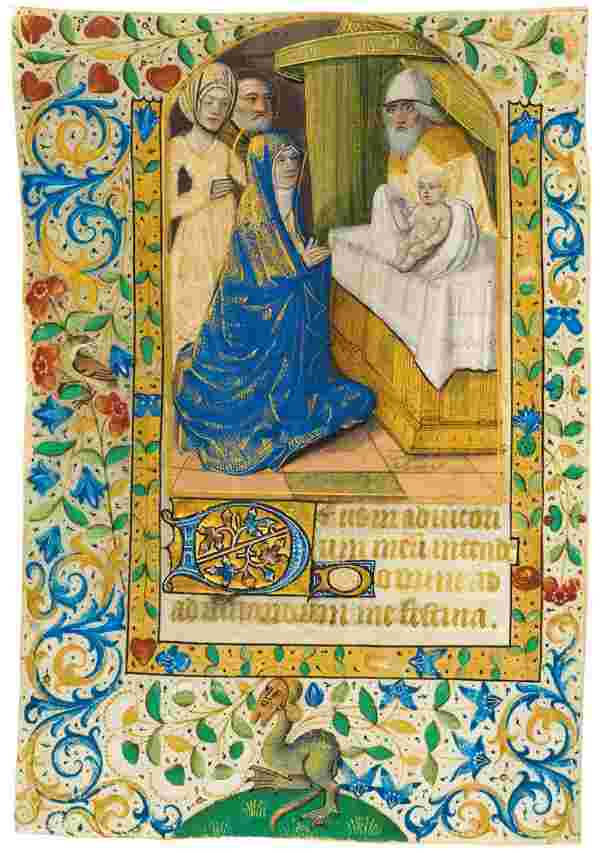 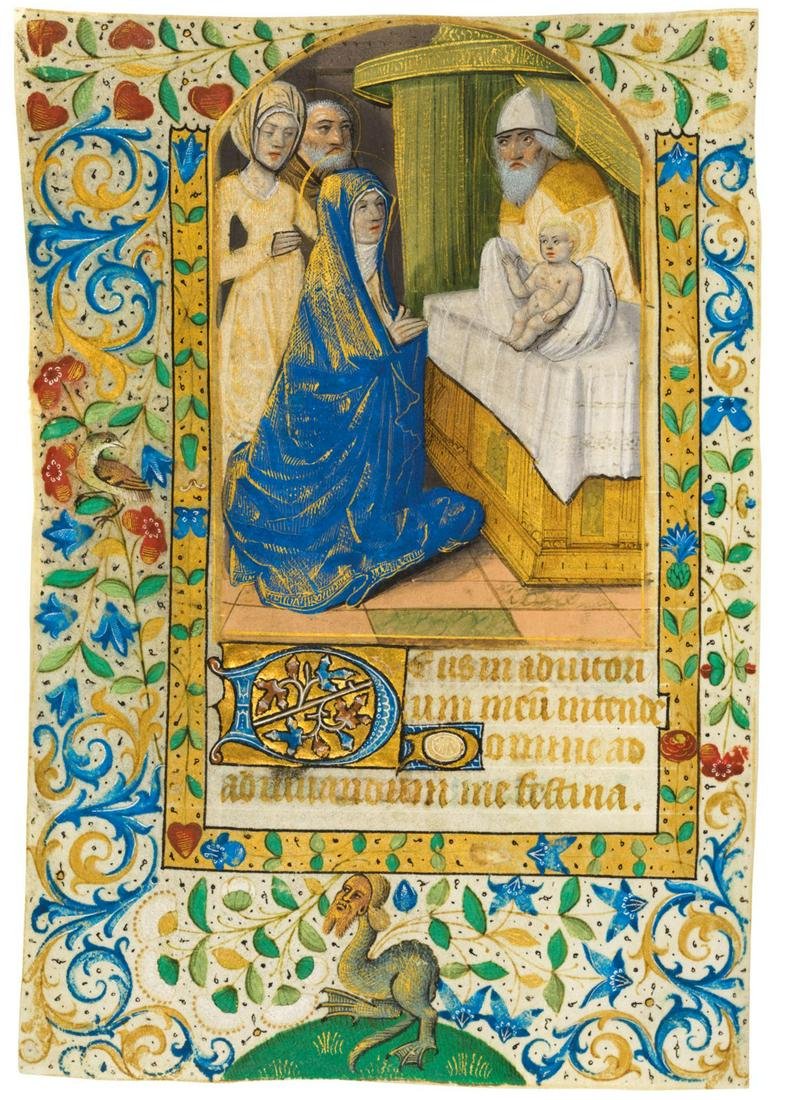 The Presentation in the Temple

THE PRESENTATION IN THE TEMPLE, miniature cut from a Book of Hours possibly made for Ã‰tienne Chevalier, treasurer to king Charles VII of France, illuminated manuscript on vellum [Tours, c.1470]

A charming example of the work of the Charpentier Master, with a monogram tantalisingly suggestive of an original ownership by Ã‰tienne Chevalier, Treasurer of France.

104 x 110mm. The miniature opening None in a Book of Hours. Mounted and framed. Provenance: Possibly from a Book of Hours produced in Tours for Ã‰tienne Chevalier (1410-1474), Royal Secretary, ambassador, art patron and Treasurer of France: the monogram of two 'E's joined by a tasseled cord found here in the upper margin is a device used by Chevalier in all of his manuscripts (the same device occurs, for example, throughout the dispersed miniatures of the Hours of Ã‰tienne Chevalier, mostly in the MusÃ©e CondÃ©e at Chantilly; in British Library Add. MS. 16997, another Book of Hours; in Harvard MS. Richardson 31, a French Boccaccio; and in the 'Petites Heures of Ã‰tienne Chevalier', sold at Sotheby's, 29 November 1990, lot 144).

The artist responsible for the illumination is, as in the 'Petites Heures of Ã‰tienne Chevalier', a follower of Jean Fouquet (1420-81), the preeminent painter of the 15th century and peintre du roy to King Louis XI. The work is attributable to the Charpentier Master, active in Tours in the final third of the 16th century, and named after a Book of Hours at Angers, Bib.Mun., MS.2049) made for Jean Charpentier, notary and secretary to King Charles VIII (1483-98). In Manuscrits Ã peintures en France, 1440-1520, p.288, Avril and Reynaud note that John Plummer (The Last Flowering, 1982) divided the Charpentier Master's work between the Masters of Morgan 366 and the Morgan 96. Plummer used the Morgan 96 designation for the hand with more monumental figures and the Morgan 366 Master for the illuminator with slighter figures: the present leaf is closer to the Morgan 366 designation. The figures in the present cutting are particularly close to those in a manuscript of the Lamentations de saint Bernard, Paris, BnF, Fr.916.