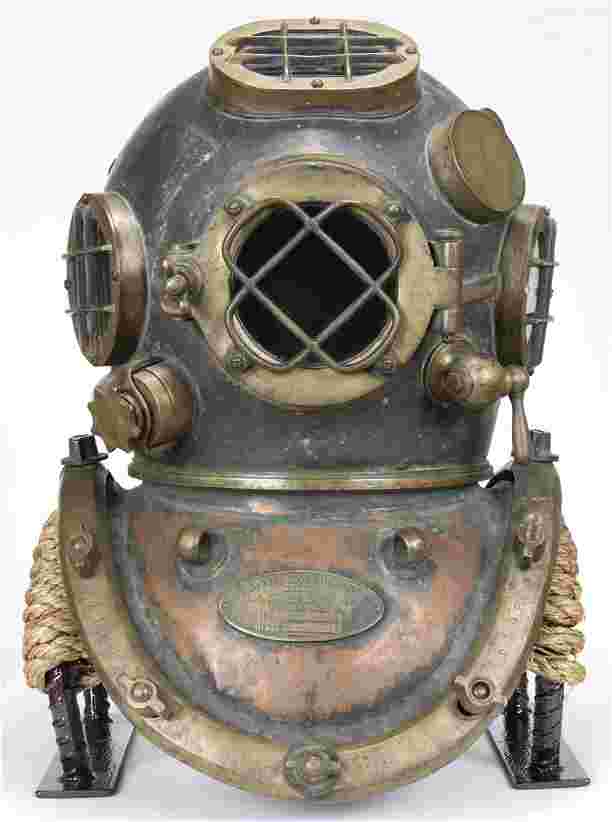 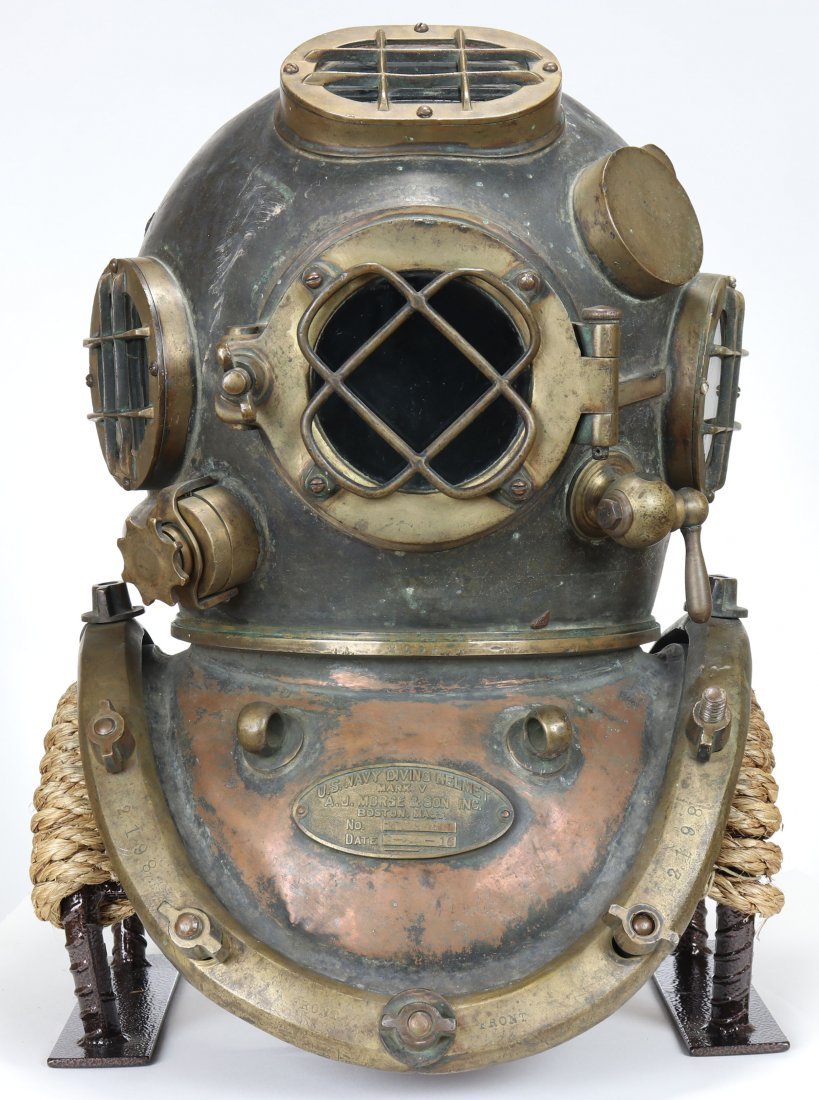 Arguably the most collected diving helmet around the world is the famed United States Navy Mark V. Its very image is a symbol of hardhat diving among many generations of divers. When these helmets can be found they are quickly acquired and cherished by collectors.

The Mark V is a helmet that has been researched thoroughly. It is commonly known that the Mark V was first made in 1916 for the United States Navy. The US Navy would be the primary consumer of the helmet from 1916 until the mid-1980s! During that time the Mark V would see dramatic increases in production due to the United States entry into World War 1 in 1917 and also World War 2 in 1941. Today in the 21st Century a large majority of Mark V helmets that are found date to the 1942 to 1945 time period. A very small percentage of surviving examples will be found from 1918. Mark V helmets dated to periods when the United States was not engaged in a World War are truly rare finds.

After many years of testing the United States Navy in conjunction with the A.J. Morse Company and the A. SchraderÂ’s Son Company developed the Mark V helmet in 1916. In conjunction, the Navy published a diving manual explaining how to use Mark V diving helmet. This manual features a clear front and back photo of a Mark V, serial #2178.

Shortly after the publication of the diving manual, the helmet went through some relatively big changes. For decades collectors have studied this original manual and the helmet featured. It is quickly realized that the example helmet is a prototype made by A.J. Morse. The most obvious difference in this helmet is the small oval A.J. Morse ID plate, then used on commercial helmets. Also, the helmet features an 8 pointed exhaust wheel, no bastard stud, and an 1898 dated communications cup. The back of the helmet has the air fitting and communications fittings reversed. The dumbbell safety latch also does not have a cover with a cotter pin preventing it from moving. All of these differences would likely be eliminated by late 1916 and early 1917 except for the 8 point exhaust wheel, which would be phased out in 1918.

In early 2020 this helmet was discovered in the northern Midwest part of the United States. It had belonged to two brothers who collected all types of antiques starting in the 1950s. Throughout their acquisitions, they stumbled upon this helmet and found it intriguing. During the 1950s Mark V helmets were commonly being sold as surplus government equipment around the United States. Having no knowledge of diving helmets or nautical antiques in general, they purchased it as a curiosity. The helmet sat in their home in an unceremoniously placed location in one of their rooms, on the floor for the rest of the 20th Century and 20 years into the 21st Century. Now in 2020 for the first time, the helmet is being seen by collectors around the world and recognized as the earliest serial number Mark V made by A.J. Morse known to exist, #2198 dated August 24th, 1916. The helmet shown in the 1916 manual was #2178.

The following is a detailed description of the helmet. Please refer to our photos of the helmet as well. If you have any questions about the helmet before bidding please do not hesitate to ask.

The helmet is in its original unaltered condition. It was used, presumably by the Navy while assessing its design. As noted above, the helmet exhibits characteristics that were undoubtedly noted by the Navy and changed on later examples sent to them, resulting in the configuration found on 99.9% of Mark Vs in existence.

1. The ID plate is the style used on Mark V helmets made by A.J. Morse & Son. The plate is stamped No. 2198, date 8-24-16.
2. The serial 2198 is also stamped into both neck rings and all four brails. These seven locations are where A.J. Morse would place serial numbers during this time.
3. Original 8 pointed exhaust wheel is present. The Interior chin button is grooved on edges and has a circle pattern on the front of the button itself.
4. Transceiver recess or communications cup is stamped Patented Dec 20, 1898.
5. The brass rectangle right of the faceplate is present but is not taped for two screw holes.
6. Bastard stud located one position above standard location.
7. Air & Communications fittings reversed from standard location (same location as shown in 1916 manual). Air fitting installed from the inside of the bonnet. Communications fitting elbow is a Siebe Gorman piece (a part known to be used on early Morse helmets made for the military, including the Stillson Prototype helmet).
8. Communications fitting has an original cap present. Cap is stamped HELMET CAP on the bottom side. Air fitting has a non-return valve present, no stamps on non-return. A cap is present at the end of the non-return valve, with no stamps.
9. Remnants of the communication line are still present inside the fitting and partially inside helmet bonnet.
10. Air vents present inside the bonnet.
11. Glass all intact, appears to be original. Glass cracked on both side windows.
12. Safety latch present, possible period repair to latch.
13. Small repair to copper body of bonnet on the upper left side.
14. Front of breastplate slightly creased with small dents in area, possible reason for discoloration, and loss of tinning in area. Slight damage appears to be from use, not mishandling.
15. Bonnet and breastplate thread together easily. Neck ring gasket present.
16. All 12 wing nuts are present and original to the helmet. Four serial # matching brails or straps present. Back two brails stamped, one with A.J. Morse & Son and the other stamped Boston. The two front brails are each stamped Front.
17. Top of bonnet exhibits slight working dents and smudges of white paint in spots.

This helmet is arguably the most significant American diving helmet find of the 21st Century so far. Overall, for what is the lowest serial # Mark V know known, was thoroughly tested by the US Navy in 1916 and then likely discarded or sent back to A.J. Morse, the helmet is in incredible original preserved condition!

In our years of finding diving helmets, especially Mark V helmets, it is without exaggeration that finding a helmet like this, in original condition, being the lowest serial # Mark V known to exist is a once in a lifetime find! If your passion is having the best Mark V collection in the world, having the earliest or simply having the most historically significant example Â– this is your one opportunity to have it!

This helmet is being sold with NO reserve. The helmet will be accompanied by a Certificate of Authenticity (COA) from The Nations Attic. The COA will be serial numbered, which will match a serial numbered tamperproof hologram on the inside of the helmet.

The winning bidder may pick the helmet up in Wichita, Kansas. The helmet can be shipped via FedEx. Nations Attic has many years of experience shipping helmets around the world and will work with the winning bidder to ensure safe and proper delivery.