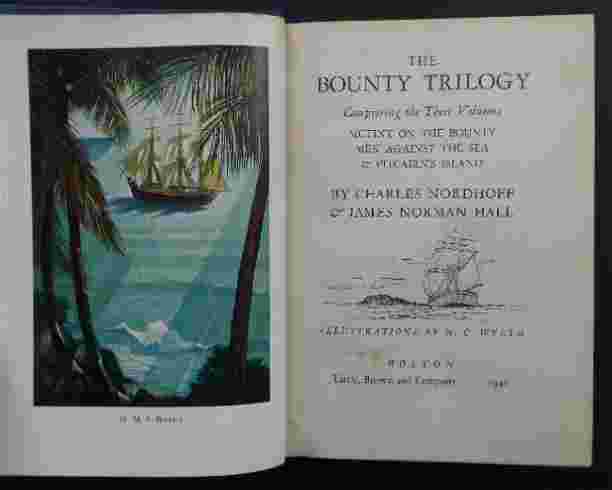 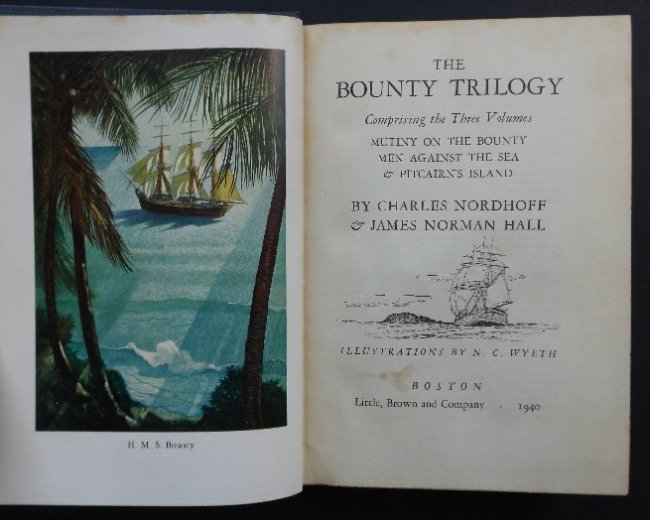 "The Bounty Trilogy", comprising the three volumes, "Mutiny on the Bounty", "Men against the Sea", and "Pitcairn's Island", by Charles Nordhoff and James Norman Hall, illustrated by N.C. Wyeth, published by Little and Brown, First Printing, October 1940.

The gripping story of the 1789 mutiny onboard H.M.S. Bounty is retold in this fictionalized trilogy. This famous story has been made into four separate movies, starring Errol Flynn in one, Clark Gable and Charles Laughton in a second, Marlon Brando and Trevor Howard in a third, and Mel Gibson, Anthony Hopkins and Laurence Olivier in a fourth.

"The Bounty Trilogy" was first published in 1936 by Little, Brown and Company, with a new preface by the authors and included vignette decorations by Henry Pitz. This edition used the plates from the original novels. In October 1940, a new edition was published by Little, Brown and Company, with illustrations by N.C. Wyeth. Nordhoff and Hall added a paragraph to their preface.

Newell Convers Wyeth (October 22, 1882 - October 19, 1945), known as N.C. Wyeth, was an American artist and illustrator. He was the pupil of artist Howard Pyle and became one of America's greatest illustrators. During his lifetime, Wyeth created more than 3,000 paintings and illustrated 112 books, 25 of them for "Scribner's", the Scribner Classics, which is the work for which he is best known. The first of these, "Treasure Island", was one of his masterpieces and the proceeds paid for his studio. Wyeth was a realist painter at a time when the camera and photography began to compete with his craft. Sometimes seen as melodramatic, his illustrations were designed to be understood quickly. Wyeth, who was both a painter and an illustrator, understood the difference, and said in 1908, "Painting and illustration cannot be mixed--one cannot merge from one into the other."

He is the father of Andrew Wyeth and the grandfather of Jamie Wyeth, both well-known American painters.

In June 1945, he had received the honorary degree of master of arts from Bowdoin College. Wyeth was a member of the National Academy, the Society of Illustrators, the Philadelphia Water Color Club, the Fellowship of the Pennsylvania Academy of the Fine Arts, the Philadelphia Art Alliance, the Chester County Art Association, and the Wilmington Society of the Fine Arts.

Significant public collections of Wyeth's work are on display at the Brandywine River Museum in Chadds Ford, in Maine at the Portland Museum of Art, and at the Farnsworth Art Museum in Rockland, Maine. The Brandywine River Museum offers tours of the N.C. Wyeth House and Studio in Chadds Ford. The home and studio were designated as a National Historic Landmark in 1997.[20] The home and studio are open to the public for tours. His studio is set up as if he has just left Â— the palette he used on the day of his death sits by his last canvas. [wiki]

705 Followers
Get notifications from your favorite auctioneers.
As Seen On
Shop With Confidence
Since 2002, LiveAuctioneers has made exceptional items available for safe purchase in secure online auctions.
Popular Searches
Artists & Creators
Brands
Style Periods
Origins
Company
Winning
Selling
© 2002-2020 LiveAuctioneers. All Rights Reserved.Cookie PolicyTerms & ConditionsPrivacy Policy
This site is protected by reCAPTCHA and the Google Terms of Service and Privacy Policy apply.
BACK TO TOP