Newcomb, Leschetitzky as I Knew Him, 1967 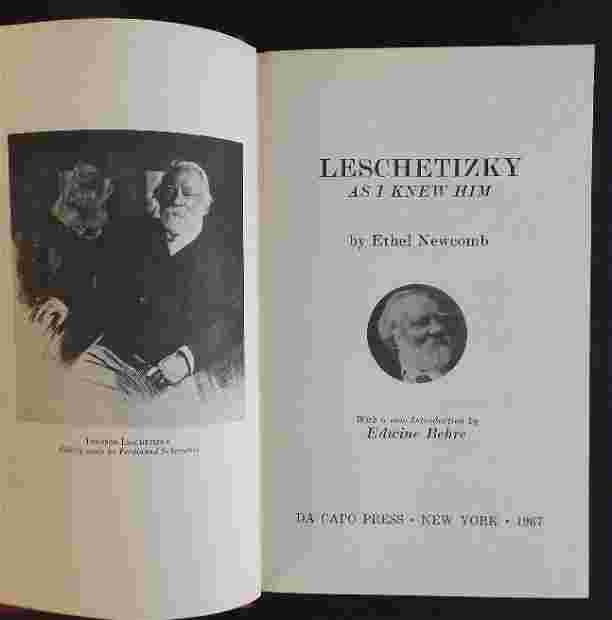 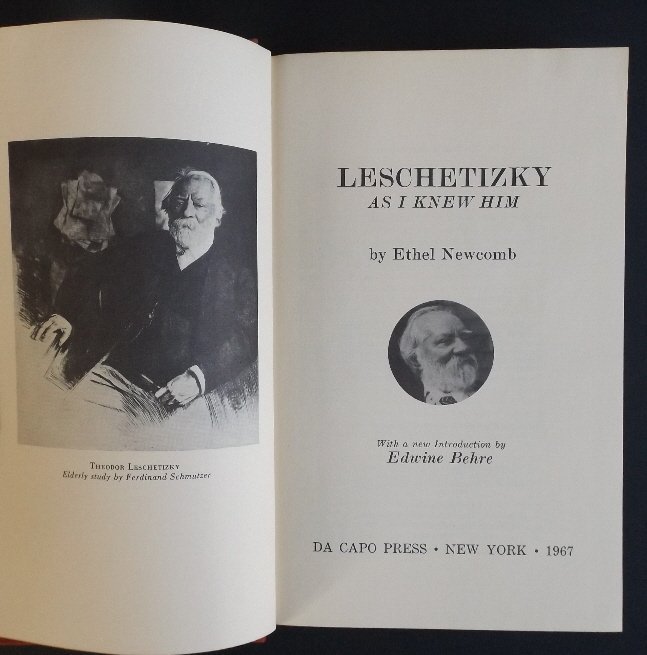 "Leschetitzky as I Knew Him" by Ethel Newcomb, with a new introduction by Edwine Behre, published by Da Capo Press, New York in 1967. Stated "Da Capro Press Reprint Edition".
This book is a reproduction of the original 1921 edition including the original 1921' title page.

Ethel Newcomb was an American pianist. A pupil of Theodor Leschetizky, she became a successful soloist and ensemble performer across Europe and the United States during the early 1900s.

Theodor Hermann Leschetizky (22 June 1830 - 14 November 1915) was a Polish pianist, professor and composer born in Landshut in the kingdom of Galicia and Lodomeria, also known as Austrian Poland, a crownland of the Habsburg Monarchy.At age eleven, he performed a Czerny piano concerto with Franz Xaver Wolfgang Mozart, the son of Wolfgang Amadeus Mozart, conducting. At the age of fifteen he started to tutor his first students. By the age of eighteen he was a well-known virtuoso in Vienna and beyond. His composition teacher was Simon Sechter, an eminent professor who was the teacher of many other successful musicians.

At the invitation of his friend Anton Rubinstein, he went to St. Petersburg to teach in the court of the Grand Duchess Yelena Pavlovna. Remaining there from 1852 to 1877, he was head of the piano department and one of the founders of the St. Petersburg Conservatory of Music in 1862. While in Russia he married one of his most famous students, Anna Essipova, the second of his four wives, with whom he had two children; one of them was his daughter, the well-known singer and teacher, Theresa, the other was his son Robert.

In 1878, he returned to Vienna and began teaching there, creating one of the most eminent private piano schools in the world. He taught Ignacy Jan Paderewski, Artur Schnabel, Fannie Bloomfield Zeisler, Mieczyslaw Horszowski, Alexander Brailowsky, Benno Moiseiwitsch, Katharine Goodson, Elly Ney, Ossip Gabrilowitsch, Mark Hambourg, Isabelle Vengerova and a host of many other wonderful pianists in his villa on Karl-Ludwig-Strasse, Vienna. Promising pianists flocked to him, coming from all over the world, with a great many from the United States, among them also classical singer Clara Clemens, the daughter of Mark Twain.From 1904 to 1908, he was assisted by one of his students, Ethel Newcomb, an experience which proved a fertile ground for background research for her 1921 book, 'Leschetizky as I Knew Him'.

Leschetizky's motto: No life without art, no art without life!

Newcomb, Leschetitzky as I Knew Him, 1967

706 Followers
Get notifications from your favorite auctioneers.
As Seen On
Shop With Confidence
Since 2002, LiveAuctioneers has made exceptional items available for safe purchase in secure online auctions.
Popular Searches
Artists & Creators
Brands
Style Periods
Origins
Company
Winning
Selling
Â© 2002-2020 LiveAuctioneers. All Rights Reserved.Cookie PolicyTerms & ConditionsPrivacy Policy
This site is protected by reCAPTCHA and the Google Terms of Service and Privacy Policy apply.
BACK TO TOP