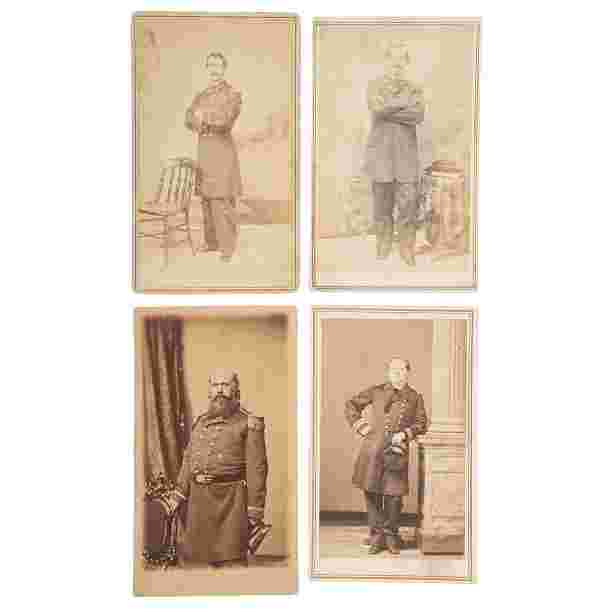 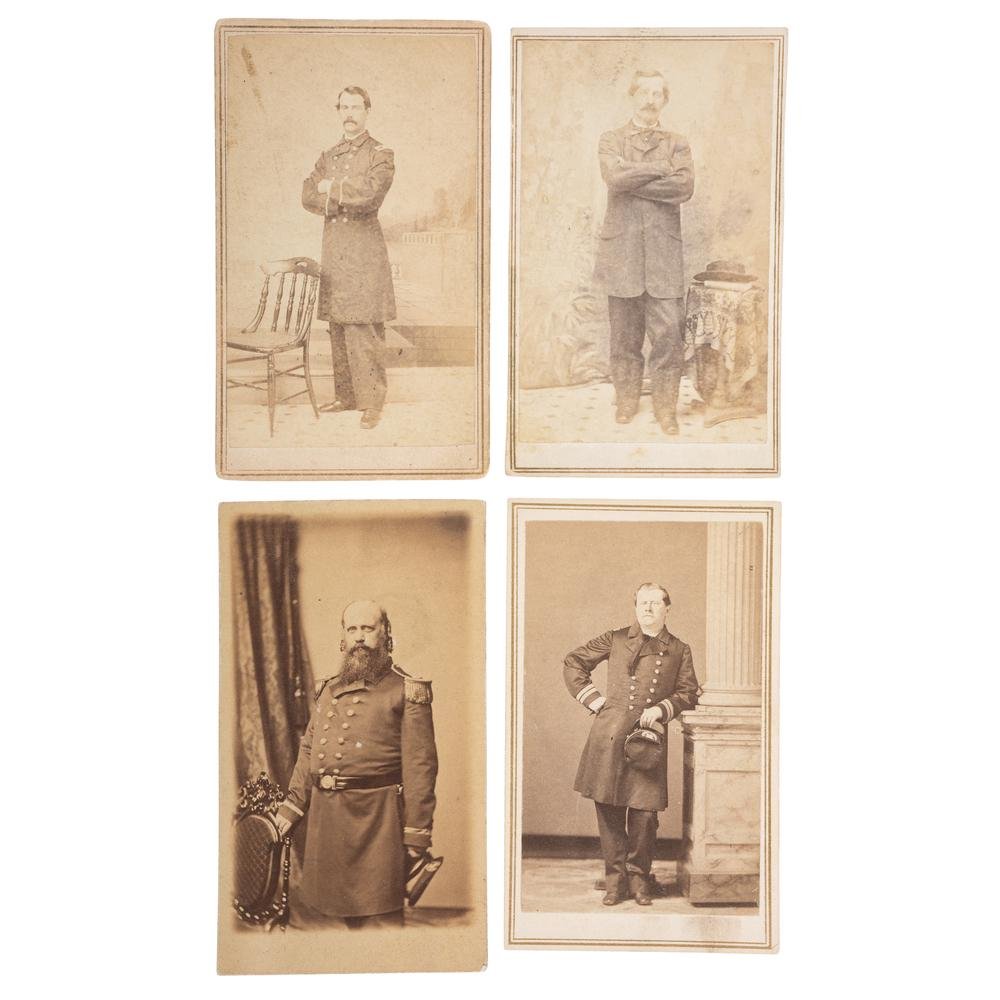 CDV of an officer leaning casually against studio column. E. Jacobs: New Orleans, LA, n.d. Pencil identified "T. M. Buchanan." Thomas McKean Buchanan: Acting Midshipman 10/1/51, Midshipman 6/9/55, Passed Midshipman 4/15/58, Master 11/4/58, Lieutenant 7/18/60, Lieut. Commander 8/5/62, KIA 1/14/63 aboard USS Calhoun. Buchanan's first wartime posting was to the steam frigate Mississippi in April 1861 destined for the West Gulf Blockading Squadron. He was promoted to lieutenant commander in July 1862 and was for a time in command of the Mississippi, the gunboat New London, and subsequently commanded the gunboat Calhoun. Admiral Farragut wrote in September, 1862, "Lieutenant Commander McKean Buchanan, with light draft steamers, had been operating successfully in Berwick Bay and Atchafalaya River." And again, from New Orleans, November 14, 1862, to the Secretary of the Navy, he encloses Lieutenant Commander Buchanan's report, saying, "He is commanding the naval forces co-operating with the army in Opelousas, and had already two fights with the enemy's steamers and land forces." On January 14, 1863, in command of a flotilla, Commodore Buchanan, while ascending Bayou Teche on board the USS Calhoun, went forward in an exposed position and was at once targeted by rebel sharpshooters on the bank. He was soon struck in the head, and fell dead on the deck. He was universally regarded "as a brave officer. His daring courage and activity while in command of these light draft steamers made his name widely known throughout that part of the country." Admiral Farragut later wrote personally of Buchanan's death, "Yesterday was a sad day for me. I went to see Banks; he handed me a dispatch from the bar, announcing the loss of the Hatteras. When I came on board I received another, telling me of the death of one of my bravest and most dashing officers, Lieutenant Commander Buchanan."

CDV of a rather corpulent officer. H. Lazier: Syracuse, NY, 1862. Ink autographed on verso "To my dearest Wife / Robert Townsend / Syracuse / June 19th, 1862." Robert Townsend (1819-1866): Midshipman 8/1/37, Passed Midshipman 6/29/43, Lieutenant 10/11/50, Resigned 4/7/51, Acting Lieutenant 9/17/61, Commander 7/16/62, Captain 7/25/66, Died in service 8/15/66. Townsend had served during the Mexican War at Vera Cruz and left the Navy in 1851. With the outbreak of war he re-entered service and thereafter commanded successively a series of warships under Farragut participating in most of the major operations of the Mississippi Squadron. In 1862 Townsend was executive officer and later CO of the gunboat USS Miami assigned to the Mortar Flotilla engaged in neutralizing Confederate fortifications below New Orleans. He then took command of the large iron gunboat USS Essex in Admiral Porter's Mississippi Squadron. Under Townsend, Essex participated in the siege and bombardment of Port Hudson during May-June, supporting army operations that ultimately resulted in the capture of the strategic location that gave the Union effective control of the Mississippi River by July 1863. Townsend sortied in Miami during the Red River Campaign and assisted in the capture of Fort DeRussy on March 15-16, 1864. He then was put in command of the new steam frigate USS Wachusett and was employed on blockade duty. On February 15, 1865 Wachusett was ordered to the East India Station to join a squadron assembling "to track down the Confederate commerce raider CSS Shenandoah."

CDV of an officer with crossed arms possessing an attitude. Uncredited, n.d. Signed in ink on verso "Yours truly / Wm. W. Black / A.M.M. / USN." William W. Black: Mate 9/23/62, Resigned 6/14/64. Black must also have served early on as acting master's mate consistent with the A.M.M. acronym. No record of service located.

9,835 Followers
Get notifications from your favorite auctioneers.
As Seen On
Shop With Confidence
Since 2002, LiveAuctioneers has made exceptional items available for safe purchase in secure online auctions.
Popular Searches
Artists & Creators
Brands
Style Periods
Origins
Company
Winning
Selling
© 2002-2020 LiveAuctioneers. All Rights Reserved.Cookie PolicyTerms & ConditionsPrivacy Policy
This site is protected by reCAPTCHA and the Google Terms of Service and Privacy Policy apply.
BACK TO TOP