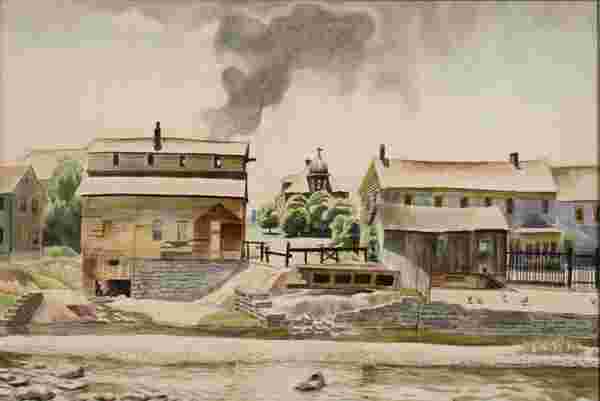 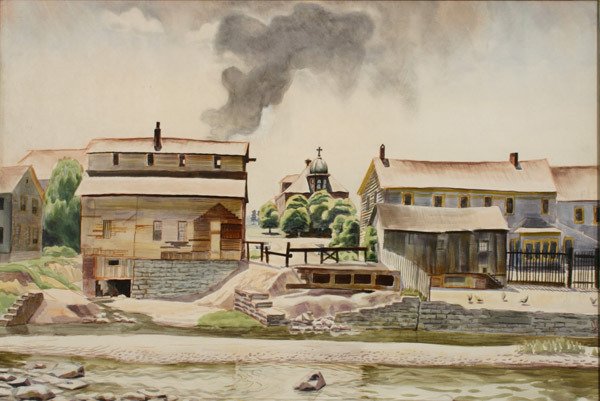 Note:
We would like to thank Nancy Weekly, Head of Collections and the Charles Cary Rumsey Curator, Burchfield-Penney Art Center, Buffalo, NY, for her kind assistance in cataloging this work. According to Ms. Weekly, Mid-Morning June was documented by Burchfield in his painting index, volume VIII, number 32. Burchfield's description of the scene is as follows: Gardenville, N.Y. Old Lumber-Mill and on[e] of the old Ebenezer 'kitchens' with Catholic parish house in background.""

Any condition statement is given as a courtesy to a client, is only an opinion and should not be treated as a statement of fact. Weschler's shall have no responsibility for any error or omission. The absence of a condition statement does not imply that the lot is in perfect condition or completely free from wear and tear, imperfections or the effects of aging. Please contact Weschler's at 202.628.1281 / 800-331-1430 or by email at info@weschlers.com for additional information. Weschler's office hours are Monday through Friday 9am to 5pm.

Washington, DC, USA
93 Followers
Get notifications from your favorite auctioneers.
As Seen On
Shop With Confidence
Since 2002, LiveAuctioneers has made exceptional items available for safe purchase in secure online auctions.
Popular Searches
Artists & Creators
Brands
Style Periods
Origins
Company
Winning
Selling
Â© 2002-2020 LiveAuctioneers. All Rights Reserved.Cookie PolicyTerms & ConditionsPrivacy Policy
This site is protected by reCAPTCHA and the Google Terms of Service and Privacy Policy apply.
BACK TO TOP