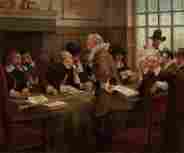 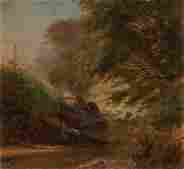 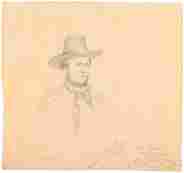 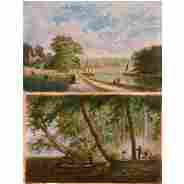 Pair of George Henry Burgess oil on board
Sold 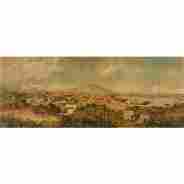 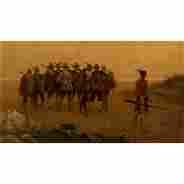 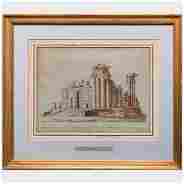 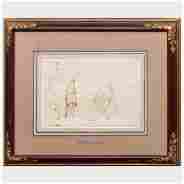 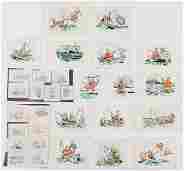 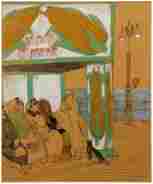 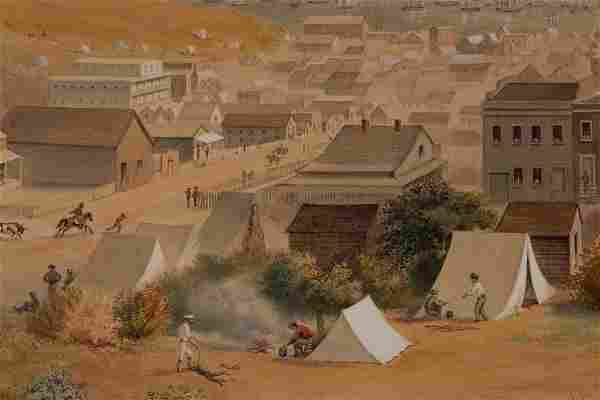 GEORGE HENRY BURGESS (BRITISH-AMERICAN, 1831-1905) HISTORICAL PANORAMIC VIEW OF SAN FRANCISCO, CALIFORNIA, watercolor and ink on paper applied to a period stretcher, a highly-detailed scene of the growing pioneer city situated by the bay, the water packed with nearly a hundred sailing vessels, signed, dated, and inscribed "San Francisco in 1850 / From Head of Clay Street / Geo. H. Burgess / 1868 / From sketch by Prendergast". Housed under glass in a period molded giltwood frame. Reserve. Dated 1868. 14 1/2" x 28 1/2" sight, 21 1/2" x 35 1/2" OA.
Excellent overall original condition. Minor pin hole at extreme left center sight edge. Later lithographic title pasted in lower margin (obscured by mat). Frame with wear.
Provenance: From the estate collection of Russell and Doris Evitt, Jackson, CA.
Catalogue Note: Born in London, George Henry Burgess (1831-1905) was the son of a distinguished surgeon. Part of an artistic family (his grandfather and three of his brothers were also artists), Burgess showed an inclination for the arts at a young age when he began his studies at the Somerset House School of Design. Around 1850, he and three of his brothers traveled to San Francisco seeking fortune and new opportunities. During the hectic 1850's in California, the Burgess brothers alternately worked as miners, jewelers, and game hunters in the region, all the while sketching and recording the landscape and settlements growing up around them. They also made several trips to Hawaii (then known as the Sandwich Islands), during which George made numerous sketches and portraits of the islands and its people. Many of these images, as well as those depicting San Francisco and parts of California, were made into lithographs or incorporated as illustrations in various publications. Ultimately making San Francisco his permanent home, Burgess co-founded the city's Art Association, operated a studio and taught lessons, and continued to produce original and lithographic views, many of which were based on sketches he had completed on his initial arrival to the area in the early 1850's._x000D_
The "Prendergast" noted in the present work's inscription refers to John Prendergast (b. 1815), a fellow Englishman who had come to California around the same time as George Burgess and produced a number of sketches documenting the region. While we have been unable to find the Prendergast source for the present work, there is a smaller preliminary sketch of this scene on ruled paper by Burgess in the collection of the Society of California Pioneers. _x000D_
The present view of San Francisco stands as an important early documentary view of an iconic American city.