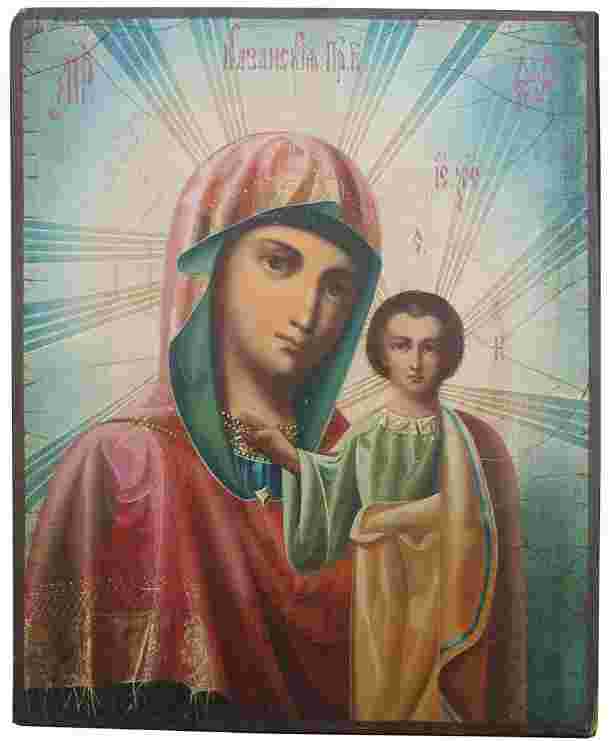 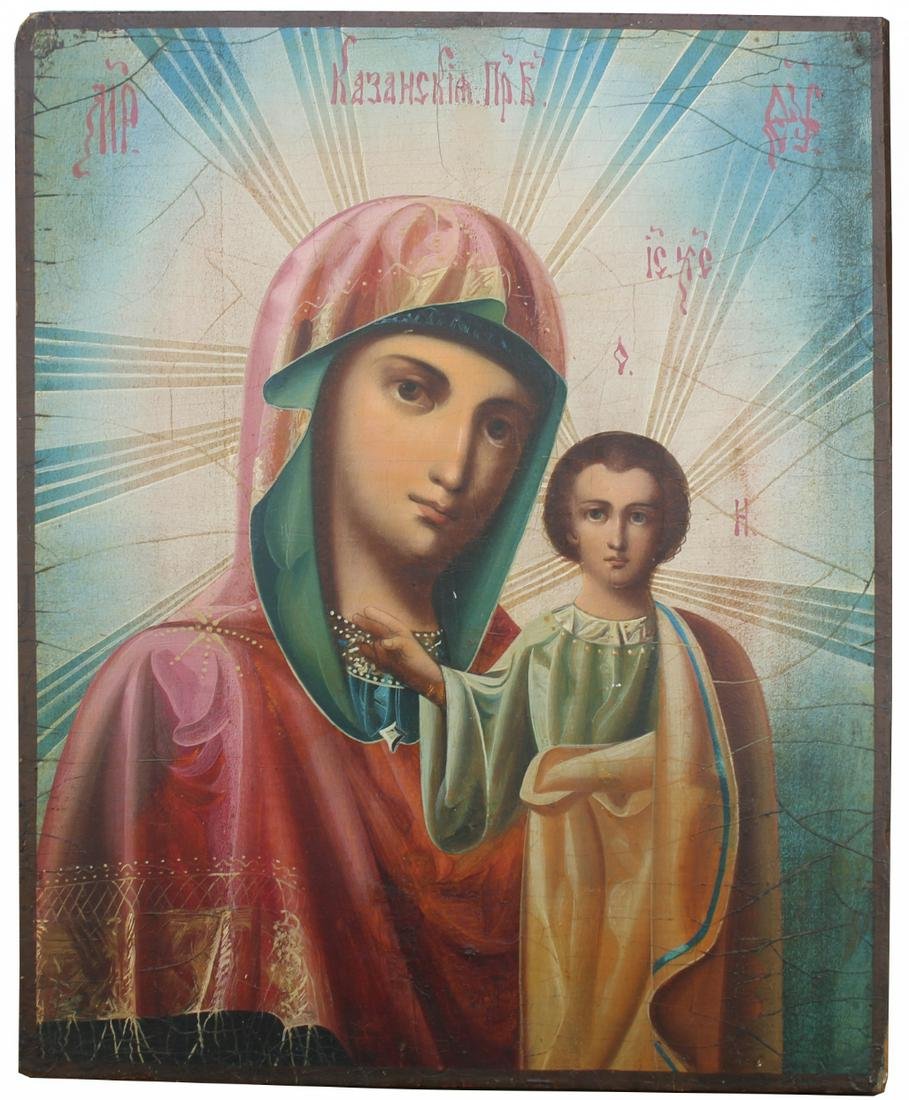 This icon takes its name from the city of Kazan, where in 1579 a young girl named Matrona saw Mary, the Mother of God in a dream. Mary told the girl to inform the authorities of a buried icon that they were to unearth. Matrona told her mother of the dream but was not believed until her mother saw a vision of the icon in her kitchen fire and heard a voice warning her to pay heed.

After the mother and daughter were not believed by the authorities, they decided to look for the icon on their own. Over three feet down, they unearthed the icon wrapped in a sleeve of red cloth. It was taken with honor to the Church of Saint Nicholas and then carried in a procession to the Annunciation Cathedral. According to tradition, two blind men were healed during the procession.

The Kazan icon became one of the two most venerated in Russia. It was credited with saving Moscow from invading Poles, among many other miracles.

- By registering to bid for this auction either in-house or online and/or placing a bid in this auction the BIDDER/BUYER agrees to all the terms and conditions of Helmuth Stone Gallery Auctions.

- All silver, gold and/or jewelry lots or invoices containing said lots MUST be paid for via wire transfer or cashier’s check, no other forms of payment will be accepted.

- All sales are final; no refunds will be given under any circumstances.

- Helmuth Stone Gallery provides condition reports as a courtesy to our clients and assumes no liability for any error or omission. Any condition statement is given as a courtesy to a client and is only an opinion and should not be treated as a statement of fact. Descriptions are our opinions and should in no way be construed as a guarantee of any kind as to age, condition, mater. The bidder assumes responsibility for ensuring that the condition of the item(s) meets with their satisfaction prior to bidding. The absence of a condition statement does not imply that the lot is in perfect condition or completely free from wear and tear, imperfections or the effects of aging.

- Online images can sometimes be low quality due to the uploading process, original high-resolution images can be requested via email at HelmuthStone@gmail.com

- We recommend looking into shipping quotes prior to bidding, shipping quotes can take up to a week or more post-sale as we host our auctions through 6 online platforms and shipping can become backlogged, if you would like a list of local shippers please email us directly.

- Our auction catalogs are hosted through multiple online platforms along with phone and in-house bidding. Bids placed on other platforms are not shown through this catalog. Because of this, even if it appears you are the only absentee bid or bidder on a lot, you may already be out bid or may have placed a bid equal to another bidder. Therefore, we always recommend bidding live.

3,185 Followers
Get notifications from your favorite auctioneers.
As Seen On
Shop With Confidence
Since 2002, LiveAuctioneers has made exceptional items available for safe purchase in secure online auctions.
Popular Searches
Artists & Creators
Brands
Style Periods
Origins
Company
Winning
Selling
© 2002-2020 LiveAuctioneers. All Rights Reserved.Cookie PolicyTerms & ConditionsPrivacy Policy
This site is protected by reCAPTCHA and the Google Terms of Service and Privacy Policy apply.
BACK TO TOP