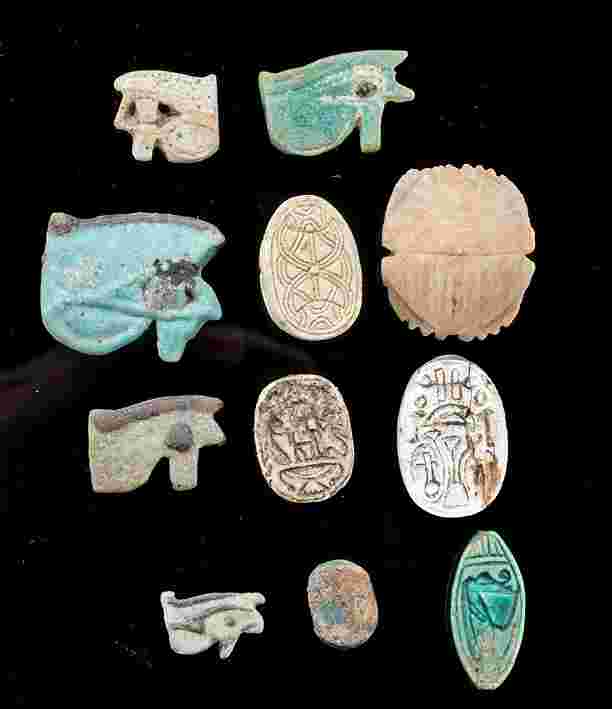 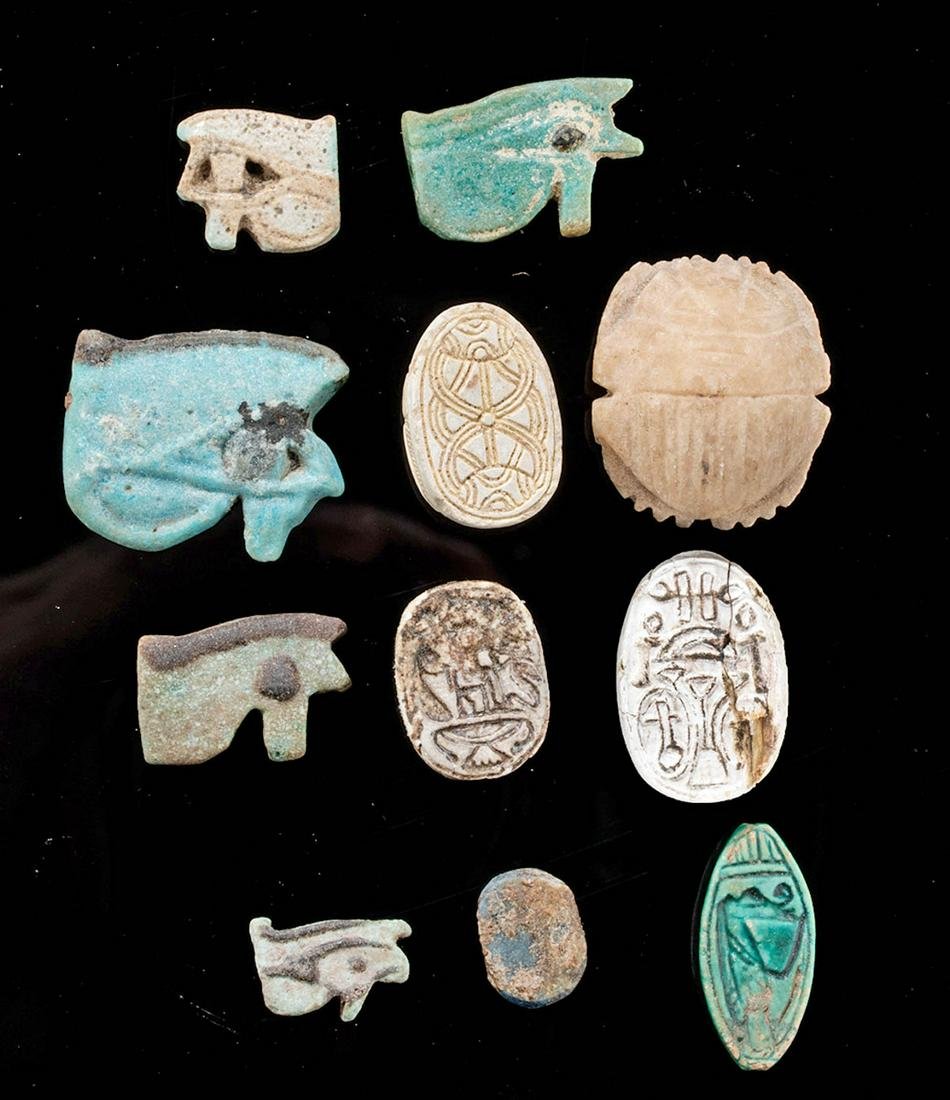 Ancient Egypt, Middle Kingdom to New Kingdom Period, 11th to 20th Dynasty, ca. 2130 to 1077 BCE. A lovely gathering of eleven attractive amulets formed from faience, stone, or wood, with ten bearing perforated suspension holes, and a petite heart scarab with an unperforated body. Five glazed faience amulets depict a powerful ancient symbol of protection known as the wadjet (or wedjat or Eye of Horus) with large eyes, sweeping lashes, and delineated pupils. A stone heart scarab exhibits typical insectile features as well as a horizontally striated base. One Middle Kingdom stone scarab features curvilinear motifs suggestive of Herakleopolis. The base of a wooden, white-painted scarab features hieroglyphs for 'beauty' and 'life' on the base. A green-glazed cowroid features an abstract image of the goddess Tawaret. A petite lapis lazuli scarab has an uncarved base, and a stone scarab shows a pharaoh and the hieroglyph for 'gold.' Size of largest (heart scarab): 0.9" L x 0.8" W (2.3 cm x 2 cm)

The scarab, beloved in ancient Egypt as a sacred beetle, was an emblem of Khepera, the creator. Given that the word "kepher" can be translated as "creation, existence, being, or becoming," the god Khepera was by extension regarded as the creator of all. Symbolic of resurrection and fertility, carved scarabs served two primary roles: as personal seals to identify the property of the individual whose name was placed upon them, and as amulet possessing spiritual and protective powers. In either case, the scarab was thought to possess immense power. Serving as the owner's signature, the scarab brought about wealth and prosperity during the individual's lifetime. During the afterlife, the scarab was thought to bring about rebirth and eternal life.

According to the AMA Journal of Ethics, "The well-known symbol Rx may even be derived from Egyptian hieroglyphics. According to the legend, Horus, the god of sky and of light and keeper of secret wisdom, sustained a terrible eye injury while seeking to avenge the murder of his father. Later, the eye was magically healed. The eye of Horus thus became a symbol of health, now recognized as Rx, and its placement by physicians on written prescriptions represents an appeal for the success of the recommended remedy."

Repairs to lapis lazuli and wood scarabs, with small chips to wood scarab, and light adhesive residue along break lines; the remaining items are intact and very good. All items have minor nicks, abrasions, and softening to finer details commensurate with age, with fading to original glaze pigment, and light encrustations. Light earthen deposits and great remaining details on bases.

4,781 Followers
Get notifications from your favorite auctioneers.
As Seen On
Shop With Confidence
Since 2002, LiveAuctioneers has made exceptional items available for safe purchase in secure online auctions.
Popular Searches
Artists & Creators
Brands
Style Periods
Origins
Company
Winning
Selling
Â© 2002-2020 LiveAuctioneers. All Rights Reserved.Cookie PolicyTerms & ConditionsPrivacy Policy
This site is protected by reCAPTCHA and the Google Terms of Service and Privacy Policy apply.
BACK TO TOP