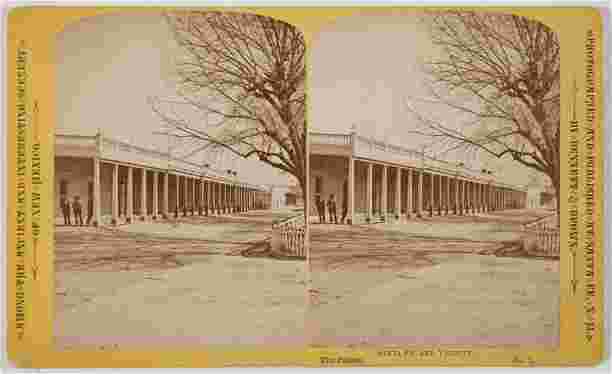 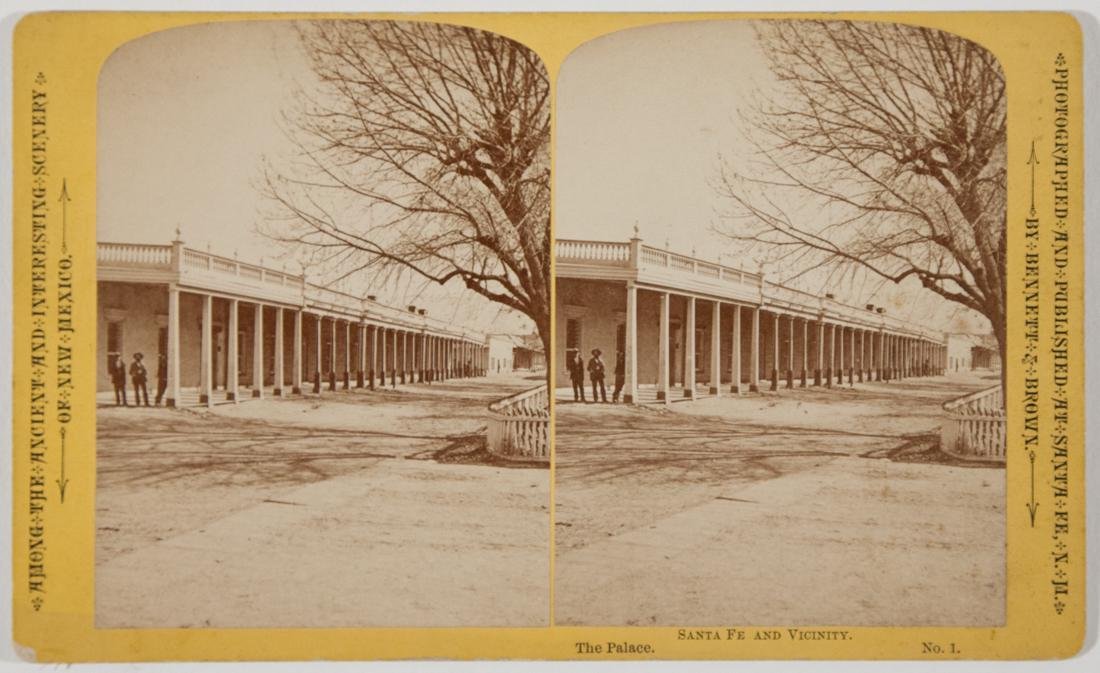 A stereo view the St. Francis Cathedral, and a stunning larger Boudoir view of the architecture of the entire front of the Palace of the Governors, the oldest government office in the United States

Henry Brown (d. 1885) moved to Santa Fe with his father, photographer, Nicholas Brown. In 1880 he formed a partnership with George C. Bennett publishing under the name Bennett and Brown. Bennett is the camera operator until ill health in 1883 leads Brown to hire other operators. During this time Brown published over 400 views under his own name as well as Bennett and Brown. These included many views of Pueblo Indians, mission churches and Indian Pueblo architecture along the Rio Grande. Henry Brown moved to Parral, Mexico in 1884, then to El Paso in 1885 where he died of consumption. Ref: Richard Rudisill, Photographers of the New Mexico Territory, 1854-1912.

George C. Bennett primarily made stereographs is noted in Santa Fe in 1878 publishing under the name Bennett & Burrell, Bennett and Burrell 1880 to 1883 published as Bennett & Brown Bennett and Brown. He worked for Adolph Bandelier at Acoma, Cochiti, and Frijoles Canyon 1880-1883, Ref: Richard Rudisill, Photographers of the New Mexico Territory, 1854-1912.

Tucson, Arizona, USA
179 Followers
Get notifications from your favorite auctioneers.
As Seen On
Shop With Confidence
Since 2002, LiveAuctioneers has made exceptional items available for safe purchase in secure online auctions.
Popular Searches
Artists & Creators
Brands
Style Periods
Origins
Company
Winning
Selling
© 2002-2020 LiveAuctioneers. All Rights Reserved.Cookie PolicyTerms & ConditionsPrivacy Policy
This site is protected by reCAPTCHA and the Google Terms of Service and Privacy Policy apply.
BACK TO TOP