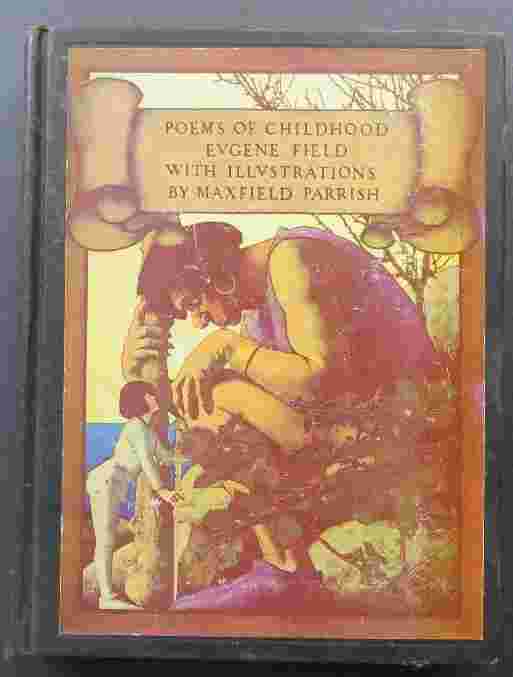 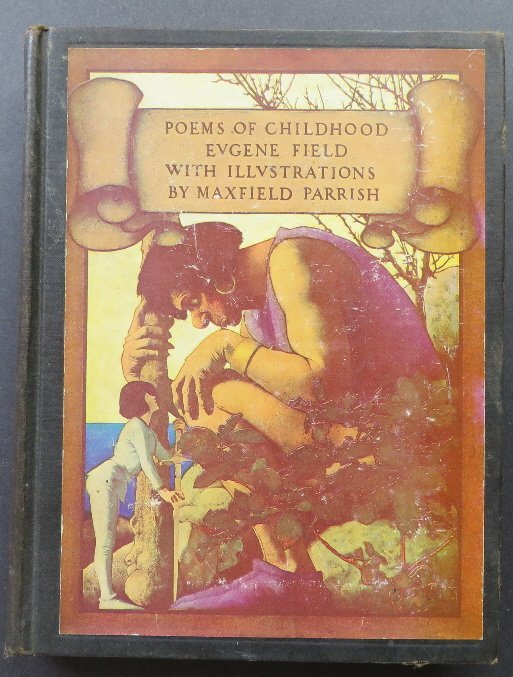 "Wynken, Blynken, and Nod one night
Sailed off in a wooden shoe,
--Sailed on a river of crystal light Into a sea of dew.
"Where are you going, and what do you wish?"
The old moon asked the three.
"We have come to fish for the herring-fish
That live in this beautiful sea;
Nets of silver and gold have we,"
Said Wynken,
Blynken,
And Nod... "

Eugene Field (1850-1895), was an unusual poet. He was one of the few poets who wrote only children's poetry. That is how he got his nickname, The Children's Poet. Some of his most famous poems are "Wynken, Blynken, and Nod"; "The Duel"; and "Little Boy Blue"

Frederick Parrish (he would adopt the name Maxfield later) was born in Philadelphia in 1870. His artistic talents were encouraged by his parents and though it was initially architecture that beckoned him, it was quite obvious that he would be an artist. His college work was remarkably sophisticated. In 1893 he approached Howard Pyle in hopes of getting instruction, but he was told that Pyle had nothing to teach him. Parrish audited a few of Pyle's classes at the Drexel Institute and came to the same conclusion. It was time to start a long and respected career.

He is best known for his color (people speak of "Parrish blue"), but his earliest work was b&w. In 1897, he illustrated Kenneth Grahame's "The Walls Were As of Jasper". He would revisit Grahame's work in two books, "Dream Days" and "The Golden Age" in 1899 & 1900. Though both of these and his other 19th century books, Mother Goose in Prose and Knickerbocker's History of New York, were b&w, they all displayed the attention to detail, composition and texture that would make his color work so instantly recognizable. There were earlier color Parrish illustrations, but most were black & white drawings with color oil glazes added to prints of the originals. What Parrish (alone!) did was a result of the printers' methods and was directly responsible for the unique 'feel' and luminosity of his art. By 1900, Parrish was an established, successful artist with membership in the Society of American Artists, a new wife, a custom built studio on the New Hampshire/Vermont border.

Parrish art was in magazines, books and was receiving recognition in the exhibits and expositions when he submitted to them. Most significantly, the public was enamored with his images. A trip to Arizona in early 1902 resulted in a suite of seven color plates that seem to have been crafted with the earliest versions of the new "varnish" technique above and capture the colors and light of the desert. Book illustrations were equally in demand. His post-1900 color output included: "Italian Villas and Their Gardens" and "Poems of Childhood" (1904), "The Arabian Nights" (1909), "A Wonder Book" and "Tanglewood Tales" (1910) and "The Knave of Hearts" (1925). He lived his entire life at his New Hampshire home/studio at The Oaks.