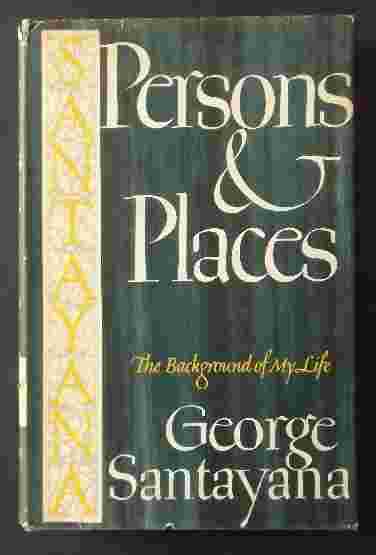 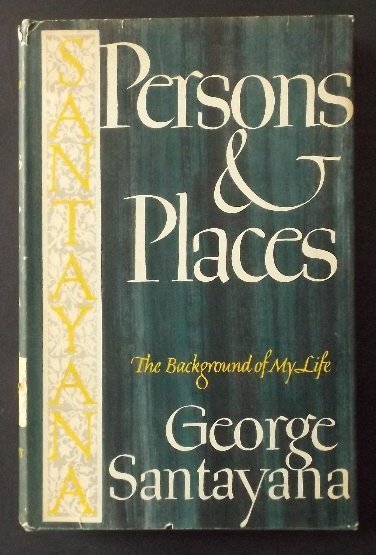 "Persons & Places. The Background of My Life", by George Santayana, First Edition, published by Charles Scribner's Sons, New York in 1944, with "War Time Book" imprint on the copyright page.

The 16 chapters of this book take us from Santayana's ancestry though his undergraduate and graduate studies at Harvard. In between we hear about his father, his mother, the family of his Spanish mother's first husband, his sister Susana (the love of his life, apparently), Avila, very early memories, his "exile" to America, his life with his Sturgis-infatuated mother at Beacon Street, Latin School, the Catholic Church which saturates his soul, then four chapters about Harvard and his friends.

A lifelong Spanish citizen, Santayana (1863-1952) was raised and educated in the United States, wrote in English and is generally considered an American philosopher, essayist, poet, and novelist, even though, of his nearly 89 years, he spent only 39 in the U.S. He is perhaps best known as an aphorist, and for the oft-misquoted remark, "Those who cannot remember the past are condemned to repeat it," [from "Reason in Common Sense"]

726 Followers
Get notifications from your favorite auctioneers.
As Seen On
Shop With Confidence
Since 2002, LiveAuctioneers has made exceptional items available for safe purchase in secure online auctions.
Popular Searches
Artists & Creators
Brands
Style Periods
Origins
Company
Winning
Selling
Â© 2002-2020 LiveAuctioneers. All Rights Reserved.Cookie PolicyTerms & ConditionsPrivacy Policy
This site is protected by reCAPTCHA and the Google Terms of Service and Privacy Policy apply.
BACK TO TOP