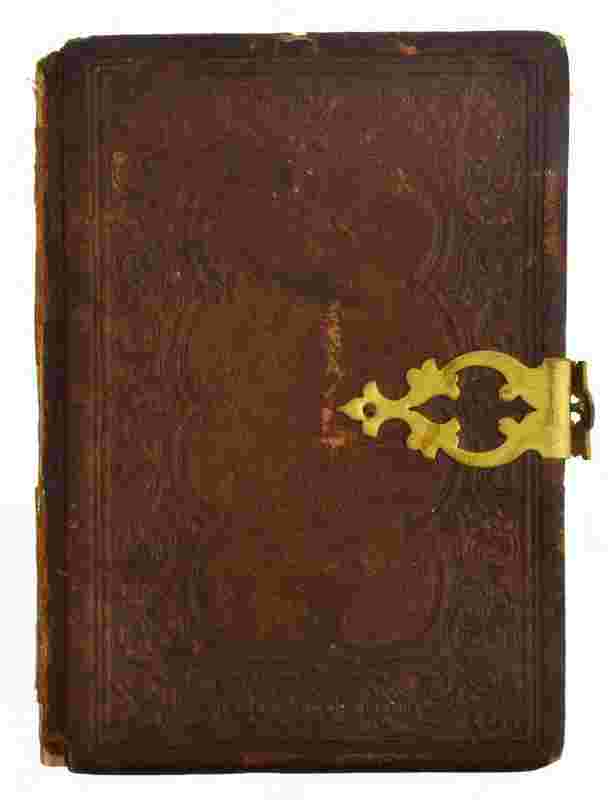 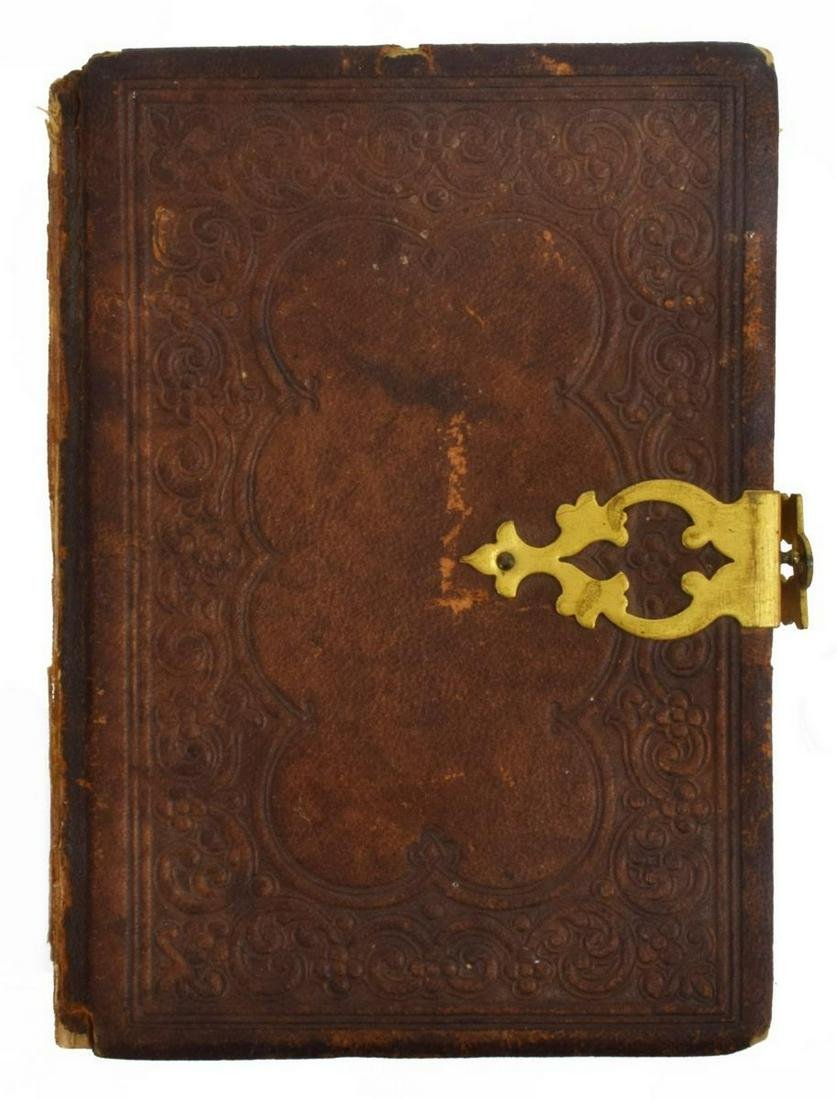 Civil War-era photograph album, Miller & Burlock, Philadelphia, retailed by McAllister Brother, 728 Chestnut Street, Philadelphia, highlights include: Abraham and Mary Todd Lincoln, Lieutenant General Ulysses S. Grant, Major General William Tecumseh Sherman, Rev. John C. Backus, along with other family photographs, worn binding, cover detached but present, lacking spine cover, approx 5.75"h, 4"w, 1.5"d, 0.75lbs *Provenance: The Veazey family was a prominent fixture of the Eastern Shore of Maryland. The initial immigrant ancestor was John Veazey, who settled on two tracts of land in Cecil County in the late seventeenth century. Thomas Ward Veazey was born on January 31, 1774 at the family estate Cherry Grove to Edward (c.1730-1784) and Elizabeth [nee de Coursey] (c.1730-1791) Veazey. Thomas was orphaned at a young age, and would receive his education at Washington College, where he graduated in 1795. Thomas married three times to Sarah Worrell (Kent County, Maryland, d.1795), Mary Veazey (d.1810), and Mary Wallace (Elkton, Maryland, 1789-1867). He fathered eleven children. His political career began in 1808 when he served as a presidential elector for James Madison. He later served in the Maryland House of Delegates from 1811 to 1812, relinquishing his seat in the General Assembly to participate in the War of 1812. During the conflict, he commanded militia forces defending Fredericktown in Cecil County, where the town was destroyed by fire during a British raid. After the war, he returned to Cherry Grove as a gentleman planter until in 1833, when he was chosen as a member of the Governorâ€™s Council. In 1835, he was nominated as a candidate for governor, receiving fifty-three out of the seventy-six ballots cast. He was sworn in as the 24th Governor of Maryland on January 14, 1836 and would serve until 1839. His governorship weathered the constitutional crisis of 1837 and is remembered for its successful solution to the reapportionment crisis. His term would represent the last Whig Party administration to hold the Maryland governorâ€™s office. He died on July 1, 1842 at Cherry Grove. This collection of historic items is offered through our consignor from the estate of Katherine Hartley Grauer [nee Craycroft] (1908-1997), great-granddaughter of Col. Thomas Ward Veazey.* Start Price: $40.00

All lots are sold as is and where is. Austin Auction Gallery provides condition reports upon request to aide in your bidding decision. No statement regarding age, condition, kind, value, or quality of a lot, whether made orally at the auction or at any other time, or in writing in this catalog or elsewhere, shall be construed to be an express or implied warranty, representation, or assumption of liability. All sales
are final, Austin Auction Gallery does not give refunds based on condition. Austin Auction Gallery does not perform any shipping or packing services. We do have a list of suggested shippers who gladly provide quotes prior to your bidding. Please visit our webpage for a list of recommended shippers.

15,812 Followers
Get notifications from your favorite auctioneers.
As Seen On
Shop With Confidence
Since 2002, LiveAuctioneers has made exceptional items available for safe purchase in secure online auctions.
Popular Searches
Artists & Creators
Brands
Style Periods
Origins
Company
Winning
Selling
© 2002-2020 LiveAuctioneers. All Rights Reserved.Cookie PolicyTerms & ConditionsPrivacy Policy
This site is protected by reCAPTCHA and the Google Terms of Service and Privacy Policy apply.
BACK TO TOP