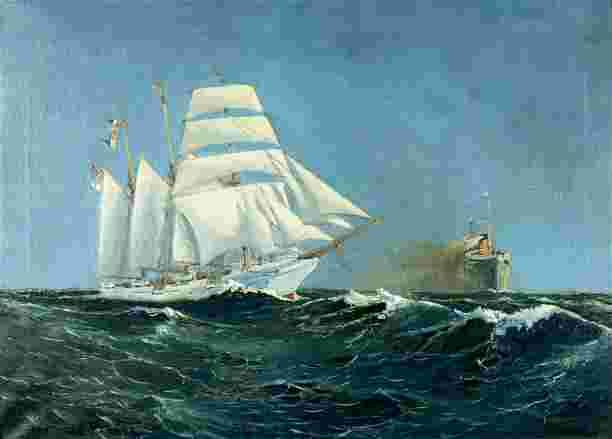 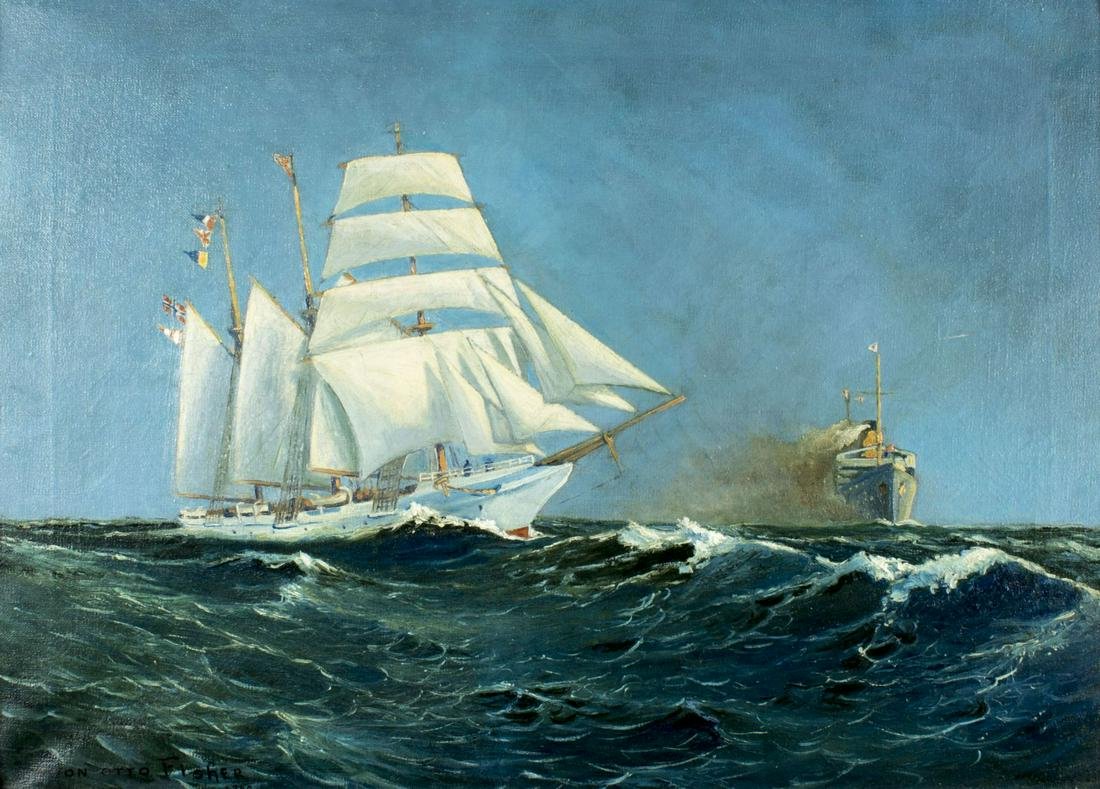 Anton Otto Fischer (New York, Germany, 1882 - 1962)
Best known for his Gloucester, Massachusetts fishing scenes, war convoys, and marine battle scenes, Anton Fischer was born in Munich, Germany and came to New York City in 1903. Among his illustrated books were "Moby Dick", "Twenty-Thousand Leagues Under the Sea", and "Treasure Island." He was known for his technical accuracy, as well as the portrayal of men's emotions in a variety of subjects. Fischer often used photographs to verify his illustrations.
Orphaned at an early age, he ran away at fifteen years of age when forced to study for the priesthood. He became a printer's devil, but soon went to sea for eight years, except for a fourteen-month period in 1905-06 when he worked as a model and general handyman for artist Arthur Burdette Frost. He also worked as a member of the crew on racing yachts in Long Island Sound, in New York and Connecticut. Fischer went to Paris in October 1906, where he studied for two years with Jean Paul Laurens at the Academie Julian, spending summers painting landscapes in Normandy.
Returning to New York City in January 1908, Fischer, influenced by the fame of Howard Pyle, soon left for Wilmington, Delaware where he established a studio at 1110 Franklin Street. He freelanced in "subject pictures," - illustrations telling a human interest story that were popular in magazines.
In 1910, back in New York City, Fischer sold his first illustration to "Harper's Weekly", then illustrated an "Everybody's Magazine" story by Jack London, for whom he would illustrate many books and magazine stories until London's death in 1916. Also in 1910, Fischer began illustrating for "The Saturday Evening Post", a relationship that would last for forty-eight years. He illustrated such stories as Kyne's "Cappy Ricks," Gilpatrick's "Glencannon," as well as serials by Kenneth Roberts, and Nordoff and Hall. From 1909 to 1920 he created more than one-thousand illustrations featuring women and babies, pretty girls, dogs and horses, sports, the Navy and the sea.
Briefly in Wilmington again in 1932, he soon moved back to New York City. In 1938, Fischer moved to the artists' colony of Woodstock, New York. He began work there on oil paintings for his book Foc's'le Days, while continuing his career as an illustrator. The book about his years at sea, was eventually published by Charles Scribner's Sons in 1947.
In 1942, during World War II, he became an official Coast Guard artist, sailing, in the winter of 1943, with the United States Coast Guard cutter Campbell. He painted works based on this experience which were exhibited in November 1943 at the Corcoran Gallery in Washington, D.C., and are now in the Coast Guard Academy collection in New London, Connecticut. Other paintings are in the collections of the Mystic Seaport Museum, Connecticut, and Kendall Whaling Museum, Sharon, Massachusetts.
Fischer continued to do magazine illustrations through the 1950s, but, at that point, preferred commissions for landscapes and marine scenes from private individuals. He died March 26, 1962, before he could begin work on a commissioned historical battle painting.