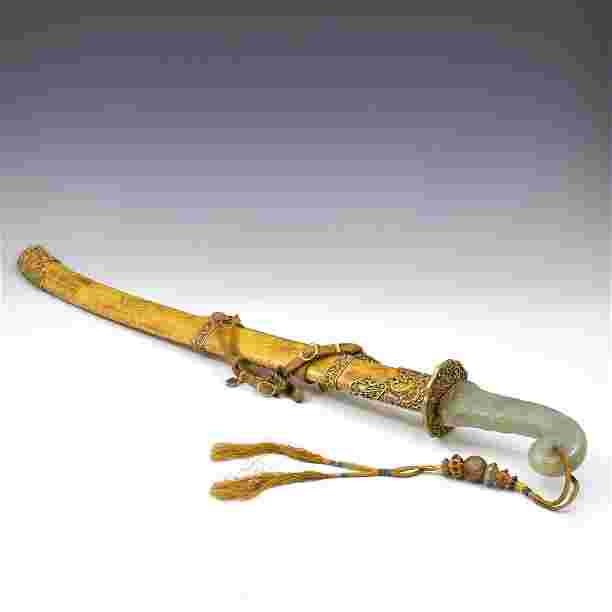 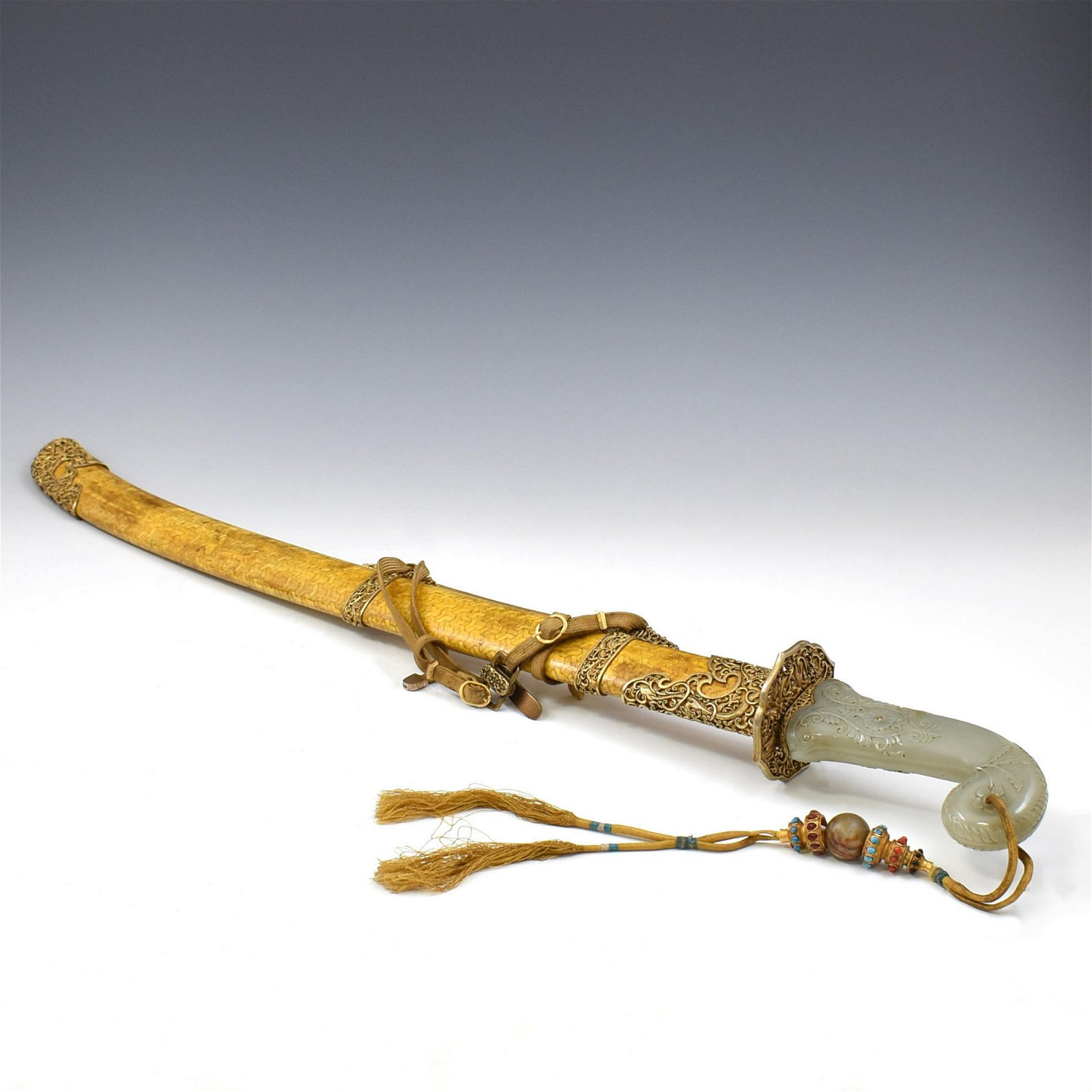 Chinese Qing dynasty important imperial celadon jade hilt ceremonial saber and scabbard, Qianlong mark, the elongated 'S'-shaped saber fitted with a celadon jade handle, intricately carved in relief with floral patterns, the center of the flower drilled and threaded with a tassel, the opposing end carved with tropical leaf patterns and embellished with an intricate gilt metal sword-guard separating the slender blade, cast in relief with floral scrolls and four free cast dragons, the steel blade decorated near the hilt with inlaid gold, silver and copper wire, one side with the two-character name, Jiou Xuang, Autumn Frost and five-character inventory number Tian zi er shi qi hao (Imperial number twenty-Eight), the reverse with a flori-form cartouche of two white rabbits within landscape, depicting the sabre's name, and the Qianlong four-character mark in silver, the blade indented on each side with a long groove, tapering to the gently upturned tip, the scabbard formed of wood with a trefoil-diaper lacquered HeTaoMu (peach-tree bark) veneer, bound with pierced gilt-metal bands for hanging, with original attachments, each with a dragon to both sides, set between similarly cast mounts protecting the mouth rim and tip. The tassel adorned with large red-coral bead central Fotou, suspending between the spherical gilt bronze amulet pendants inlaid with turquoise, tourmaline, and jade.This Sabre is very sharp, be able to easily cut a piece of paper.ATTENTION: DUE TO CHINA MAINLAND CUSTOM POLICY, ALL WEAPONRY INCLUDING THIS SWORD WILL BE ILLEGAL TO BE SHIPPED/ENTER MAINLAND CHINA.

The Sword is in Excellent condition, THE TASSEL ARE BROKEN. With normal anomalies in nature, sign of stressed surface, minor scratch & dent. Surface traced wear and or declined to gilding. Normal, considering ages and wears.
EDEN Fine Antiques Galleries provides condition reports as a courtesy to our clients and assumes no liability for any error or omission. Any condition statement is given as a courtesy to a client, and is only an opinion and should not be treated as a statement of fact. Descriptions are our opinions and should in no way be construed as a guarantee of any kind as to age, condition, mater. The bidder assumes responsibility for ensuring that the condition of the item(s) meets with their satisfaction prior to bidding. The absence of a condition statement does not imply that the lot is in perfect condition or completely free from wear and tear, imperfections or the effects of aging.