American School Portrait of a Man circa 1830
See Sold Price 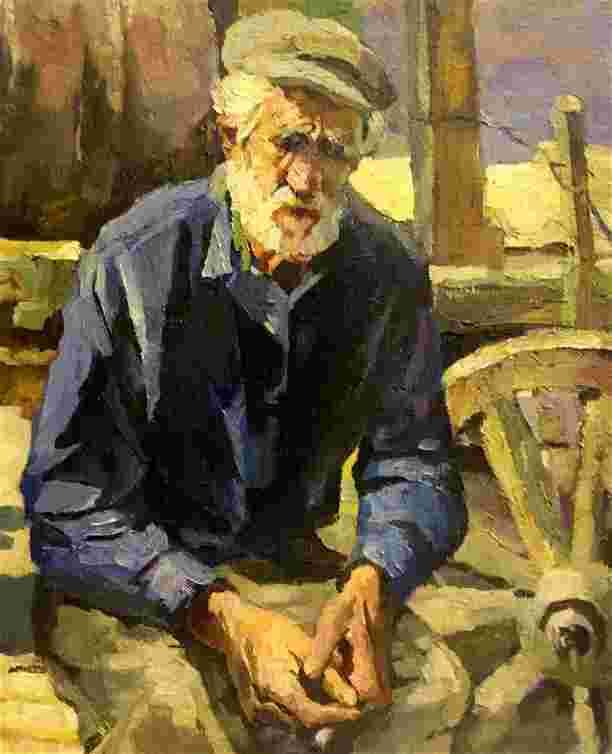 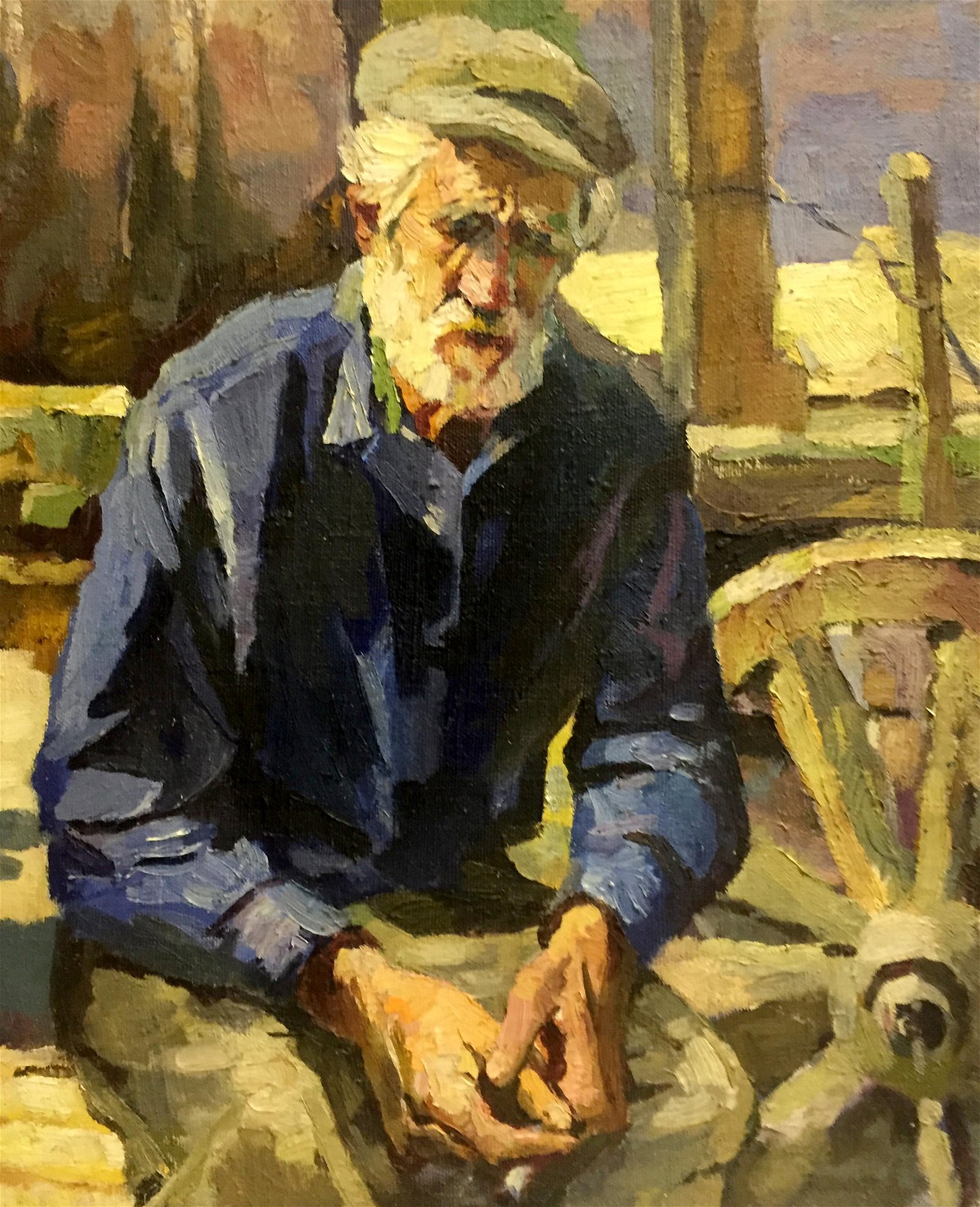 *** ABOUT THIS PAINTING ***
* TITLE: "Old man"
* ARTISTS: Vladimir School (one of the authors, but it is not known who exactly)
* SIZE: 56?46 cm/'22.04?18.11 inches'
* MEDIUM: oil, canvas
* HAND PAINTED: Original painting from our collection
* CERTIFICATE OF AUTHENTICITY is included.
* CONDITION: good condition, you can see all edges, corners and the back side of the painting on the photos

About the artist: Vladimir landscape painting is a trend that has firmly established itself in art in the 1970s and is now included in the treasury of genuine achievements of the Russian national school. For the first time, artists of this region made themselves known after the First Republican Exhibition “Soviet Russia” held in Moscow in 1960, when three artists - Kim Britov, Vladimir Yukin and Valery Kokurin - showed their works, the result of creative searches and experiments.
In his works, K. Britov frantically studied the techniques of textured writing, looking for a special luminous color that conveys the mood. V. Yukin strove to express feelings through the state of nature, V. Kokurin was interested in a light-air environment that changes color and shape of objects. The commonality of aesthetic views, the unity of the artistic style and creative method, while maintaining the individuality of manners, made it possible to talk about the formation of a new school in Russian landscape painting. Artists K. Britov, V. Yukin and V. Kokurin became its founders.

Vladimir artists relied on the deep traditions of the art of their land. The icon, the master's lacquer miniature, homespun rug, patchwork, cinnabar-luminous Vladimir surface - these are the origins of the color palette on which their aesthetic system was built. It is based on a fusion of folk culture, going from the depths of centuries, and the peaks of the Russian landscape, which occupied a worthy place in the European art process by the beginning of the 20th century.

The themes of the paintings are Vladimir villages, small district towns, bazaars, ancient streets, inconspicuous fields and copses - all that is full of quiet provincial life, which hides a mighty layer of folk culture that has preserved its vivid originality and nourishes modernity with an unclouded source of eternal beauty.
Against the background of the traditional Russian Soviet landscape of the 1960s, which was distinguished mainly by its monochrome color, the picturesque manner of Vladimirites - A. Lukin, Yu. Matushevsky, N. Mokrov, A. Smirnov, V. Templin, their desire to portray the discreet motifs of nature in central Russia open color in the early 1960s seemed a challenge, dropped out of the established stereotype and did not fit into the official aesthetic canon.

Masters of the Vladimir landscape did not immediately find their unusual creative style. At the beginning of the journey, in the mid-1950s, they worked in the traditional style of socialist realism. The color of the paintings was built on similar tones and followed the laws of the landscape school of the 19th century. The soft, pearl, white-silver gamut of painting helped to create a lyrical mood in the works, reflect the state of light sadness, awakened by the quiet melody of the Central Russian landscape. Free from ideology, a clean landscape, in the genre of which Vladimirites worked, was most in tune with the artists' internal protest against the official schemes of Soviet painting of those years.

Many art historians devoted their works to Vladimir artists. The art critic Platon Pavlov wrote: “The search for color brightness required artists to solve some specific decorative and painting problems. Work in “open” tones is primarily reflected in the picturesque transfer of space. In these cases, a simple weakening of color saturation by blurring or whitening tones in the background can disrupt the necessary unity of color.
Therefore, in the paintings of Vladimirites, the background is often no less intense in color than the foregrounds, but the quality of the color background with which they are written is such that the viewer does not disappear from the impression of space. Artists achieve this through a particularly accurate selection and combination of color tones. Such a picturesque system entails the need to build a composition in a special way.
It is no coincidence that Vladimir artists have the main knot, the center of composition - a building or tree - often the most intense in color. But the color rhythm plays a particularly important role in their canvases. Artists are not afraid to repeat spots of the same tone, deploying them on the canvas. A characteristic technique of Vladimir landscape painters is the use of a high horizon and a high point of view.
This technique enhances the decorative effect. The sky in canvases usually occupies the most modest place: it either looks somewhere between the houses, or is depicted as a narrow strip under the upper plank of frames. Sometimes it doesn’t exist at all. But the earth resembles a flowery carpet. Trees, houses, streets are sometimes arranged in tiers. With regard to technology, that painting, often pasty, differs among Vladimir artists in an energetic, broad brushstroke. ”

32,433 Followers
Get notifications from your favorite auctioneers.
As Seen On
Shop With Confidence
Since 2002, LiveAuctioneers has made exceptional items available for safe purchase in secure online auctions.
Popular Searches
Artists & Creators
Brands
Style Periods
Origins
Company
Winning
Selling
Â© 2002-2020 LiveAuctioneers. All Rights Reserved.Cookie PolicyTerms & ConditionsPrivacy Policy
This site is protected by reCAPTCHA and the Google Terms of Service and Privacy Policy apply.
BACK TO TOP