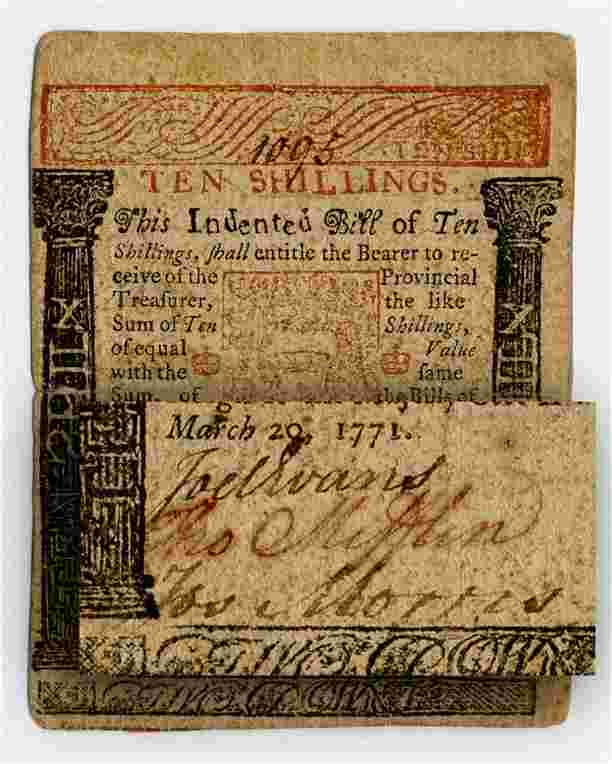 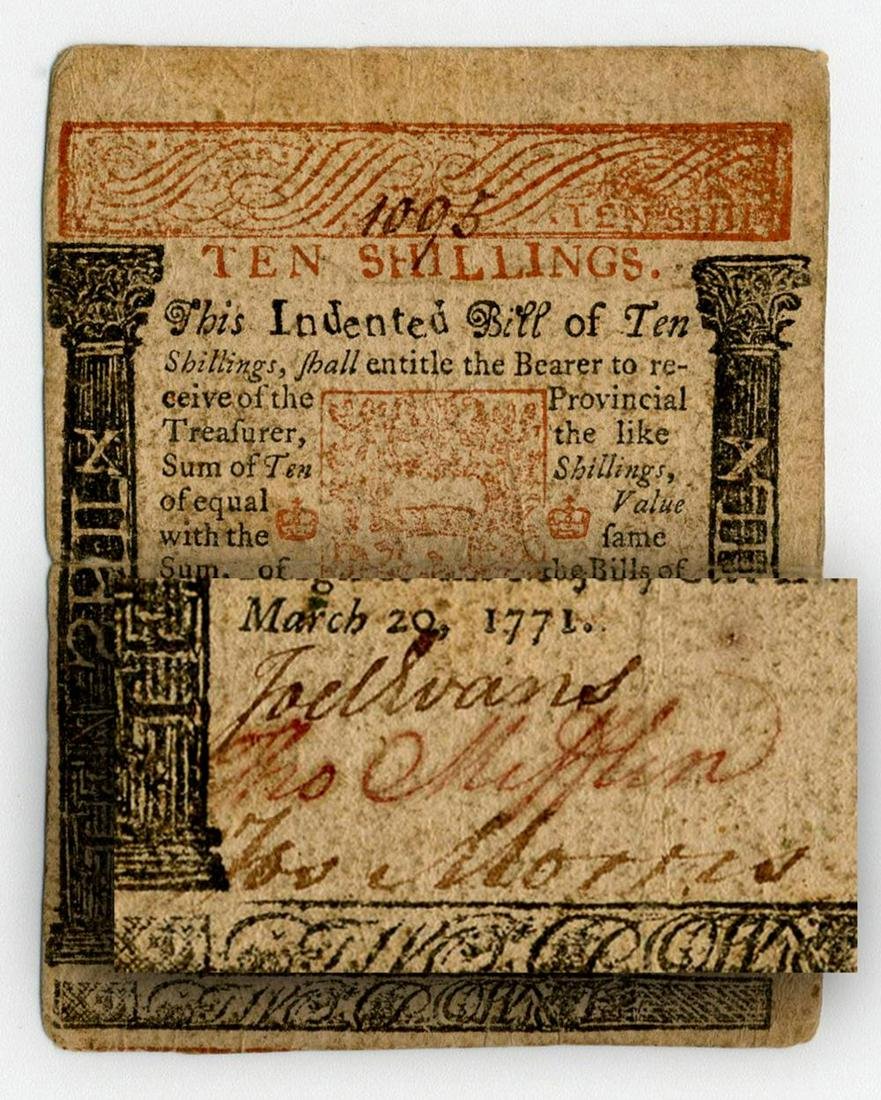 A colonial Pennsylvania engraved bank note signed by Thomas Mifflin (1744-1800), Pennsylvania delegate and U.S. Constitution signer, as "Tho Mifflin" at bottom recto. Countersigned by Joel Evans and Joseph Morris. Printed by David Hall and William Sellers in 1771. The bank note, No. 1095 in a series, was issued in the amount of ten shillings. With a central horizontal fold, scattered creases and wrinkles, overall toning, and isolated stains. Else very good. 3" x 3.75." From the Collection of Dr. Lawrence E. Miller (1931-2014), orthopedic surgeon, psychiatrist, and autograph collector.

The printed design elements in brick red and black, though primitive, are aesthetically pleasing. The following text appears between two Corinthian columns recto: "Ten Shillings. This Indented Bill of Ten Shillings, shall entitle the Bearer to receive of the Provincial Treasurer, the like Sum of Ten Shillings, of equal Value with the same Sum, of the Bills of Credit now by Law current, according to the Directions of an Act of General Assembly of Pennsylvania, made in the 11th Year of the Reign of his Majesty Geo. II[I]. Dated March 20, 1771." A leaf bordered by a floral design appears verso, along with the warning: "To Counterfeit, is Death."

Thomas Mifflin was a Philadelphia merchant and Patriot who would serve as General George Washington's aide during the Revolutionary War. Mifflin signed the Constitution as one of eight Pennsylvania delegates at the Philadelphia Convention in 1787. He later served as the 1st Governor of Pennsylvania between 1790-1799.

1,662 Followers
Auction Curated By:
John Reznikoff
President
Get notifications from your favorite auctioneers.
As Seen On
Shop With Confidence
Since 2002, LiveAuctioneers has made exceptional items available for safe purchase in secure online auctions.
Popular Searches
Artists & Creators
Brands
Style Periods
Origins
Company
Winning
Selling
Â© 2002-2020 LiveAuctioneers. All Rights Reserved.Cookie PolicyTerms & ConditionsPrivacy Policy
This site is protected by reCAPTCHA and the Google Terms of Service and Privacy Policy apply.
BACK TO TOP