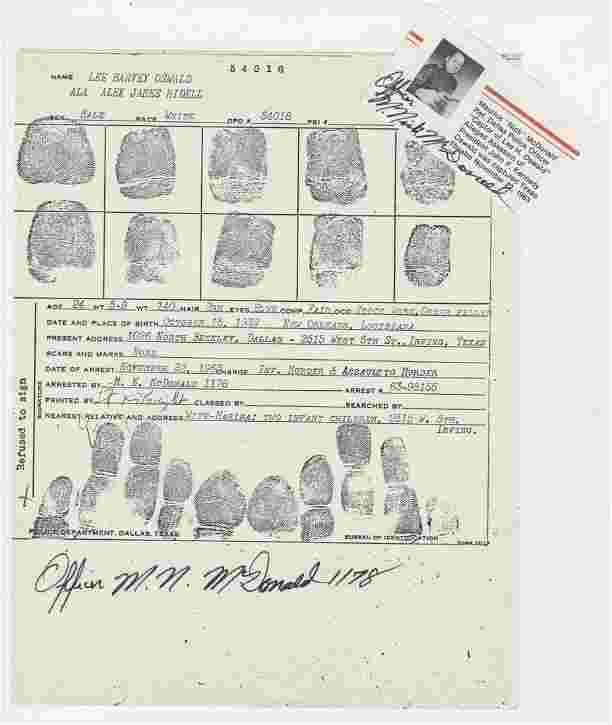 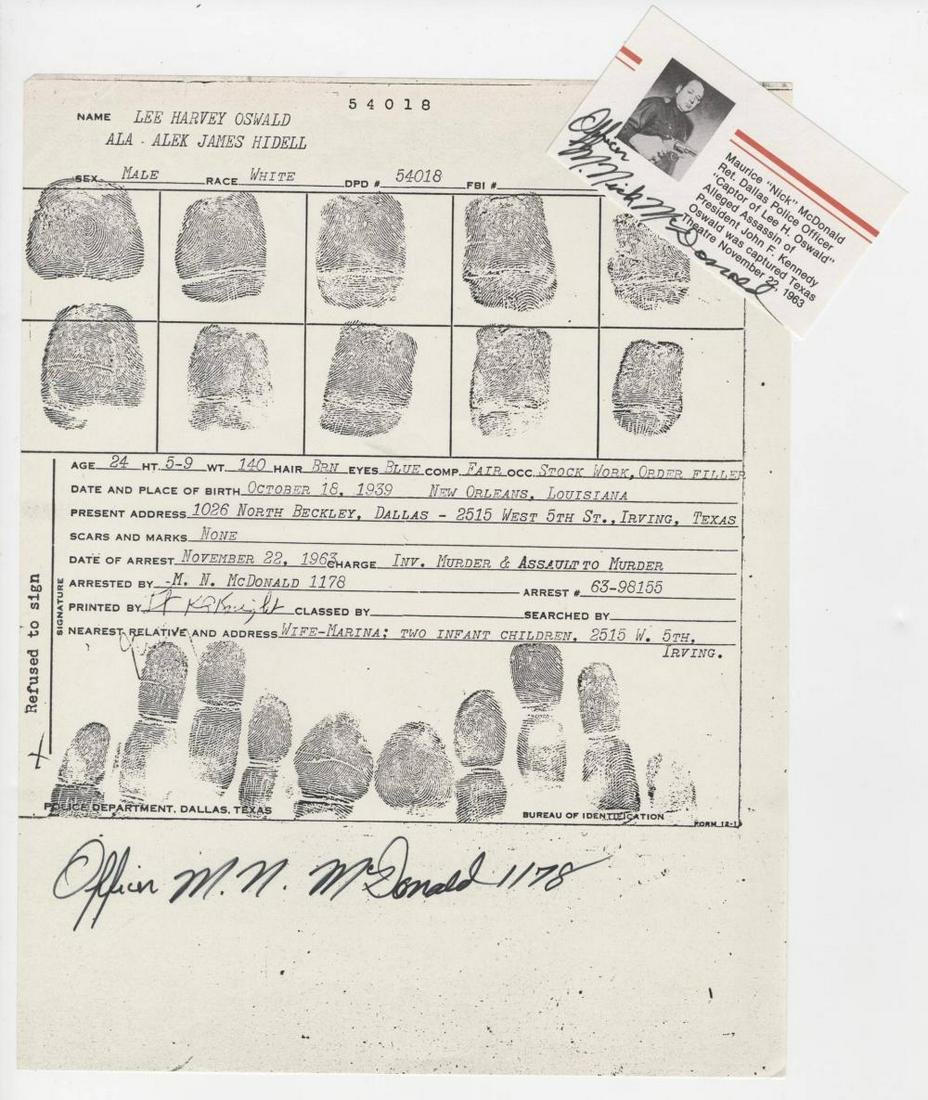 Oswald Police Dept Fingerprints Signed by Officer McDonald, Captor of Oswald
Signed Photocopy of the finger printing police record of Lee Harvey "Oswald, Signed by the arresting officer, Officer Maurice "Nick" McDonald, "Officer M.N. McDonald 1/78", 8.5"x 11". Accompanied by McDonald's card, 3.5" x 2", also signed by, "Officer M. Nick McDonald". The card includes a small black and white photo of the officer and the comment "Maurice 'Nick' McDonald Ret. Dallas Police Officer 'Captor of Lee H. Oswald" Alleged Assassin of President John F. Kennedy. Oswald was captured Texas Theater November 22, 1963"
McDonald arrived at Dallas’ Dealey Plaza moments after Kennedy was shot on Nov. 22, 1963. Later that day, he searched the Texas Theater and helped make the historic arrest, grappling with the man suspected of shooting Kennedy after Oswald pulled a gun. By then, Oswald had shot another Dallas officer dead in a confrontation. “He made a fist and bam -- hit me right between the eyes,” McDonald recalled years afterward. “Knocked my hat off. I came back and hit him.”

It wasn’t until later in the day that McDonald realized whom he had captured. In a memoir, “The Arrest and Capture of Lee Harvey Oswald,” McDonald recalled going to the rear of the theater after police received a tip that a suspicious man had entered without paying. McDonald and another officer confronted Oswald, who said, “Well, it’s all over now.” As police tried to search and handcuff him, Oswald pulled a pistol and tried to fire, but McDonald grabbed the weapon and moved to block the trigger with his hand.

“I could feel the hammer glide under my hand,” McDonald wrote. “The returning hammer made a dull, audible snapping sound as the firing pin struck the flesh of my left hand, between the thumb and forefinger. Bracing myself, I stood rigid, waiting for the bullet to penetrate my chest.” But the bullet didn’t fire. McDonald jerked the weapon from Oswald, fell on top of him and finally subdued him.

1,659 Followers
Auction Curated By:
John Reznikoff
President
Get notifications from your favorite auctioneers.
As Seen On
Shop With Confidence
Since 2002, LiveAuctioneers has made exceptional items available for safe purchase in secure online auctions.
Popular Searches
Artists & Creators
Brands
Style Periods
Origins
Company
Winning
Selling
Â© 2002-2020 LiveAuctioneers. All Rights Reserved.Cookie PolicyTerms & ConditionsPrivacy Policy
This site is protected by reCAPTCHA and the Google Terms of Service and Privacy Policy apply.
BACK TO TOP