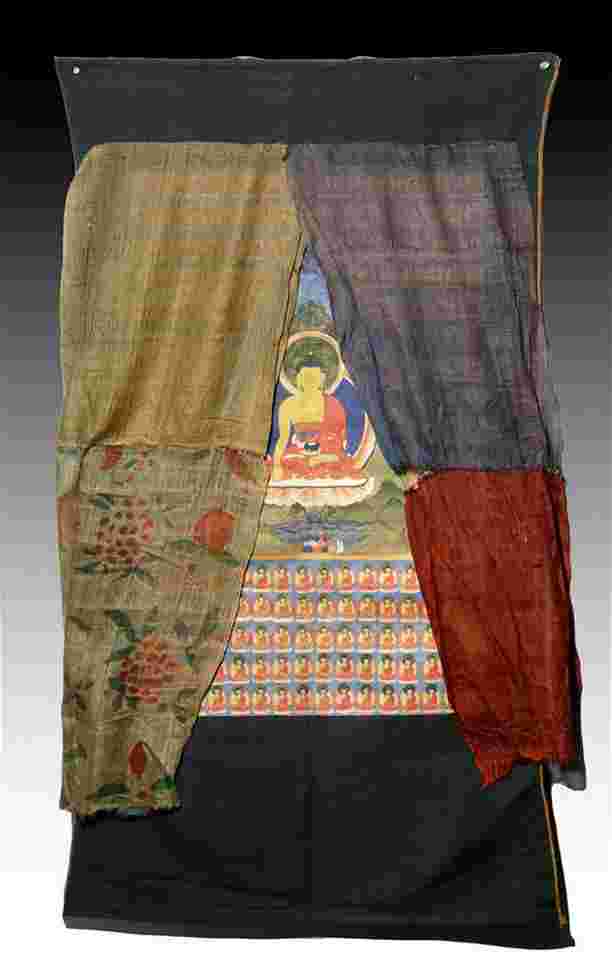 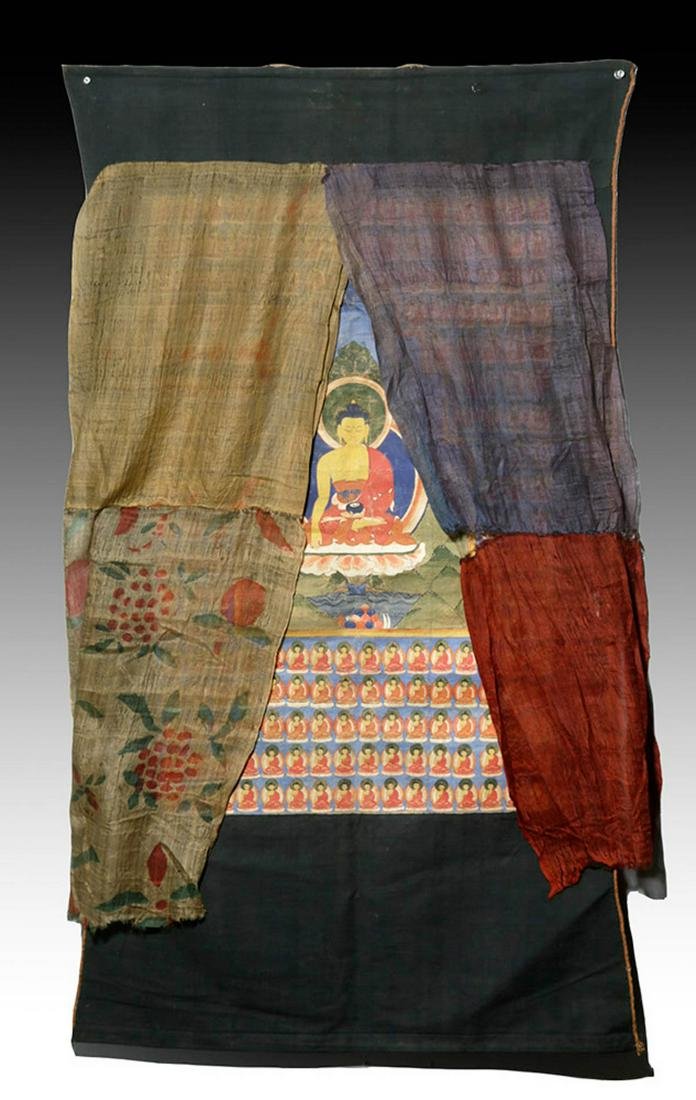 Southeast Asia, Tibet, ca. 19th c. CE. A hand-painted thangka with colorful silk dust covers depicting Shakyamuni surrounded by many Buddhas. Known as a Series of Buddhas, thangkas with a repeated image of Buddha like this are seen on the inner wall of most monasteries/temples. There is strength in numbers; this saying resonates with certain aspects of Buddhism, particularly thangkas like this example where more buddhas are better than one. Size: painted image 29.875" L x 18.75" W (75.9 cm x 47.6 cm); entire 47.5" L x 25.1255" W (120.6 cm x 63.8 cm)

At center is Shakyamuni Buddha seated on a lotus throne with a peaceful gaze of meditation, blue hair in tufts with a gold top-knot ornament and the split ears of a prince, he wears the patched saffron red robes of a fully ordained monk. With legs folded in Vajra posture he sits upon a multicolored lotus holding an alms bowl. Shakyamuni Buddha, also known as Gautam Buddha, was born in 563 BCE at Lumbini, the western part of Nepal. He attained "Bodhi Gyana" enlightenment -that is a state of Nirvana- after six years of meditation. He was then called the enlightened one "Buddha". He died at the age of eighty at Kusinagara. To distinguish from all other Buddhas, he is called Shakyamuni (lion of the Shakya clan), and is the son of King Suddhodana and Queen Mayadevi. Imagery of the Shakyamuni Buddha is believed to bring peace and enlightenment in believers' bodies and minds.

In Mahayana Buddhism, an idea developed that the historic Buddha was only one of a series of buddhas. The period of Shakyamuni, seen here at center, would last 5,000 years, until the year 4500, when the new buddha, Maitreya, would arrive. This concept kept evolving in Buddhism, and the number of buddhas grew to series of 8, 9, 24, 35, 52, 1,000 and various other numbers - the symbolic value being infinity.

4,859 Followers
Get notifications from your favorite auctioneers.
As Seen On
Shop With Confidence
Since 2002, LiveAuctioneers has made exceptional items available for safe purchase in secure online auctions.
Popular Searches
Artists & Creators
Brands
Style Periods
Origins
Company
Winning
Selling
Â© 2002-2020 LiveAuctioneers. All Rights Reserved.Cookie PolicyTerms & ConditionsPrivacy Policy
This site is protected by reCAPTCHA and the Google Terms of Service and Privacy Policy apply.
BACK TO TOP